The Story Behind Chartreuse, the Legendary Liqueur of the Carthusians 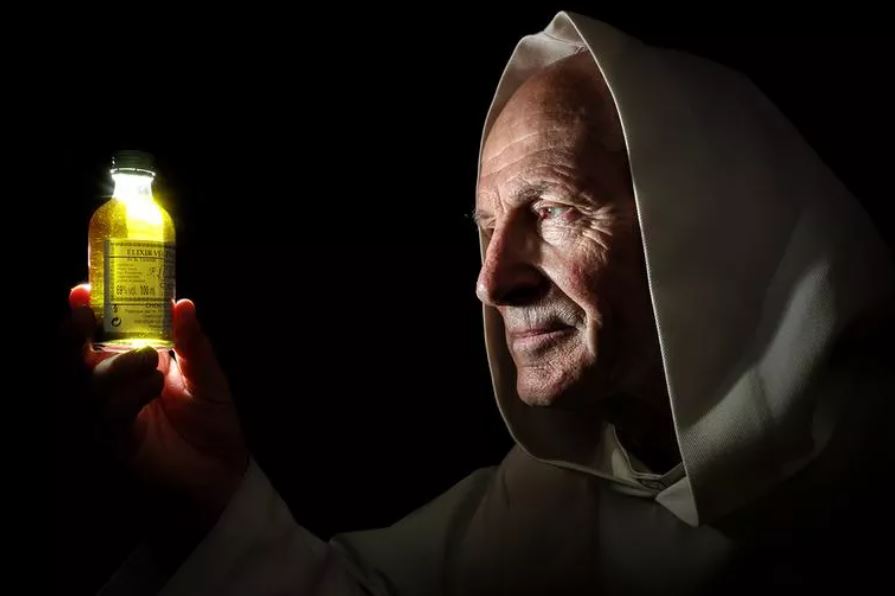 The Story Behind Chartreuse, the Legendary Liqueur of the Carthusians

The world-renowned “elixir of life” has been around for centuries, but its secret recipe — which has nearly disappeared several times — has never been revealed by the monks who made it famous.

Chartreuse liqueur, produced by the Carthusian monks for more than three centuries in both its green and yellow forms, has always been surrounded by a veil of mystery.

Traditionally, in each generation, only two friars of the Monastery of the Grande Chartreuse (the head monastery for the Carthusian religious order, located at the heart of the Chartreuse mountains in southeastern France) are entrusted with the recipes, which are inscribed on a 17th-century manuscript. The manuscript is kept in a secret safe, to which only the superior of the Carthusians has the key.

The very origin of this “elixir of life,” which is made up of 130 medicinal plants, remains a mystery. The Carthusian Monks received the precious recipe for this tonic in 1605 from the Duke and Marshal of King Henry IV, François-Annibal d’Estrées, who never revealed where the parchment came from.

The original formula, which incorporated almost all the medicinal plants available at that time, was gradually adjusted by the monks because of its excessive complexity. It was not until 1737 that the definitive recipe for their emblematic “herbal elixir” — identical to the one we know today — was finalized thanks to the tireless efforts of Brother Jérôme Maubec, the monastery’s apothecary.

Three decades later, building on the popularity of their precious creation, the monks used the same recipe to develop what would become their core product — a green digestif that they originally called “health liqueur,” and which is now known as “Green Chartreuse.” This drink, which gave its name to the color now known as “chartreuse” — is considered inimitable, as it is the only green-colored digestif with no artificial coloring (probably due to the presence of chlorophyl).

The “Yellow Chartreuse,” created in the 1830s, is lower in alcohol and has a sweeter taste, with lingering aromas of spices, flowers and honey, while the green one has a more herbaceous flavor.

The original manuscript, which seemed to have fallen from the sky, later gave rise to a host of other beverages, the sales of which have provided steady income to the Carthusian Order and enable the monks to fully dedicate themselves to their life of prayer, study and silence.

In the face of the constant increase of their production, that now amounts to more than one million bottles every year, using 24 tons of plants. A company called Chartreuse Diffusion handles the day-to-day operations, including packaging, advertisement and sales, but the trade secrets are still entrusted only to two Carthusian monks.

(This is also why the beverages are not protected by any patent, in order not to divulge the secret recipe.)

As reported by Le Parisien, the company’s annual sales amount to 17 million euros (about $20 million). Half of the liqueur is exported to other countries, and especially to the United States, which is among the large consumers of chartreuse.

The undeniable success of these products over time is the fruit of the monks’ unique savoir-faire, patiently cultivated over the centuries, without which the recipe alone would be useless.

And it is again to their persistence and perseverance that we owe the longevity of this tradition, as fate often seems to have threatened its disappearance.

First, in 1789, the friars were expelled from their monastery during the French Revolution. One of the monks escaped with the manuscript, but was arrested shortly after and imprisoned in Bordeaux (southwestern France). Before dying in the prison, the monk gave the precious recipe to another monk of the community. That monk didn’t know how to decipher it, so he entrusted it to a pharmacist named Liotard, who was also unable to unravel its mystery. The parchment slowly fell into oblivion.

At the death of Liotard, the manuscript was finally restored to the Carthusians, who would return to the Monastery of the Grande Chartreuse in 1816.

Almost a century later, the anticlerical French Third Republic would once again threaten the monks’ activities. Expelled from France in 1903, the community settled in Tarragona, Spain, where the friars could continue to distill their liqueurs.

They returned to France in 1929 and resumed their work at their old distillery, a few miles away from the Monastery of the Grande Chartreuse, until a landslide entirely destroyed the buildings in 1935, forcing them to relocate again to Voiron, another city of the region.

Since 2017, Chartreuse liqueurs have been distilled in Aiguenoire, in Entre-Deux-Guiers (located at the heart of the Chartreuse mountains, very close to the monastery), because the tightening of regulations governing alcohol distillation activities compelled the community to find an alternative location. This distillery is the seventh of the long history of the world-famous liqueurs.

“It can be said that Chartreuse liqueurs have participated in the vicissitudes of the monks’ lives,” Dom Dysmas de Lassus, the Carthusian prior general, said at the dedication of the new distillery on Aug. 18, 2018.

“Let’s wish [the new distillery] a long life! It has come closer to its birthplace because the history of countless counterfeits has shown that the Chartreuse liqueurs can live only in Chartreuse.”

Americans ‘in a Different Place Sp...