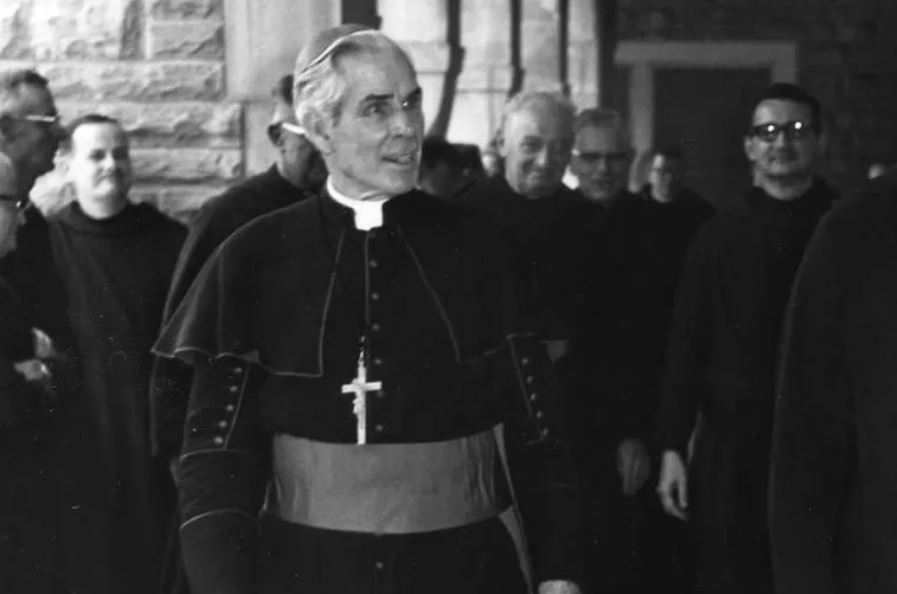 “You have written and spoken well of the Lord Jesus Christ, Pope St. John Paul II told him in 1979. “You are a loyal son of the Church.”

With yet another Dec. 9 death anniversary of Archbishop Fulton Sheen passing last month, one can’t help but both wonder if that date will someday officially be established as his feast day whenever he is declared “Blessed.”

The Diocese of Peoria opened the cause for canonization of Archbishop Sheen in 2002 and in June 2012 his heroic virtues were recognized by Pope Benedict XVI as he was declared “Venerable.”

The identification and verification of a miracle is normally a giant hurdle and reason that most sainthood causes stall for decades or even centuries. But in the case of the beloved media bishop, the necessary medical cure through his intercession came to the fore quickly. A dramatic miraculous healing in September 2010 of James Fulton Engstrom, son of Bonnie and Travis Engstrom of the Peoria-area town of Goodfield, who was apparently stillborn without breath or a heartbeat for 61 minutes, was submitted to Rome. It was approved unanimously by the Medical Commission of the Congregation for the Causes of Saints as being without natural explanation, noting that the child had survived without any cognitive or developmental deficit.

But a long delay would follow until the longstanding legal dispute related to the final resting place of his mortal remains was resolved. Pope Francis then approved on July 5, 2019, the promulgation of the decree of the miracle, thus clearing the way for his beatification. The saintly archbishop was scheduled to be beatified in Peoria on December 21, 2019, but the ceremony was postponed. No further investigation into the life of Fulton Sheen — or a reopening of the process that resulted in him being declared “Venerable” — is required in order that he be formally declared Blessed, as his life of virtue has thoroughly been examined.

The Vatican must only re-schedule the date of the ceremony — due to the COVID-19 pandemic the Congregation for the Causes of Saints has been slow to schedule ceremonies in general with canonizations in Rome in particular finally resuming in Rome on May 15, 2022, after a hiatus since October 2019. The establishment of the new date of the beatification — which will certainly be hosted in Peoria, Illinois — will be greeted with excitement in Illinois, New York, and by a generation of Catholics throughout the United States where the memory of Sheen lives on in the hearts of the faithful.

Before his work in the media for which he became widely known, Fulton John Sheen came from humble beginnings. He was born the eldest of four sons to devout Catholics Newton and Delia (Fulton) Sheen on May 8, 1895, on a farm outside of El Paso, Illinois. Sheen was a frail infant, prompting his family to move shortly after his birth to Peoria because of his poor health.

At the Cathedral of St. Mary of the Immaculate Conception, he served as an altar boy at Mass for Bishop John Spalding, one of the founders of the Catholic University of America.  As the valedictorian of Spalding Institute in Peoria, Fulton excelled in academics and demonstrated a proclivity for public speaking. For college, Sheen enrolled in St. Viator College in Bourbonnais, Illinois, and later attended Saint Paul Seminary in Minnesota, being ordained a priest of the Diocese of Peoria at the age of 24 on Sept. 20, 1919. Afterward Sheen went on for a year of further studies at the Catholic University of America, where five years later returned to teach for 23 years after earning a doctorate in philosophy in Louvain and a Doctorate in Sacred Theology (S.T.D) in Rome.

He lectured in theology and philosophy to students in classrooms where he honed his skills as a speaker and evangelist and inspired him to take his gift for oratory to the next level. In 1926 Father Sheen got his first taste of broadcasting on the radio when he was invited by a New York station to record a series of Sunday evening Lenten sermons.  In the summer four years later, Sheen filled in for two weeks to a positive audience response that led to recordings for the popular NBC Sunday night radio broadcast of The Catholic Hour which ultimately reached an audience of over four million listeners and generated as many as 6,000 letters a day. The weekly program ran until 1950, with Monsignor Sheen (as he was known after 1934) addressing topics like Marian devotion, the dangers of Communism and the social issues of the time.

Monsignor Sheen’s his first television appearance coming on the world’s first broadcast of a Catholic Mass on Easter Sunday on March 24, 1940. His national profile then increased as he was appointed auxiliary bishop of New York in 1951, appeared on the cover of Time Magazine and started his television show, Life Is Worth Living, with millions of Americans tuning in each week. Walking the streets of New York, Sheen would engage with people on the street from all backgrounds and attitudes toward him — admirers, critics, believers or fallen-away Catholics.

In addition to his inspirational radio and television programs like the 1957 series on the life of Christ entitled Quo Vadis America, Sheen wrote numerous books — 66 in all — and used the sales to support foreign missions. He covered a vast array of topics in his books like he did on television and radio, including theology, science, morality, marriage, priesthood and philosophy. Perhaps his most popular was Life of Christ, in print for more than 50 years. Archbishop Sheen’s personal love and devotion to the Mother of God was on full display with his written works with three published books have the Blessed Virgin Mary as the subject and as all are formally and uniquely dedicated to her.

He became the national director of the New York-based Society for the Propagation of the Faith in 1958, supervising 129 diocesan directors throughout the country. For years this was his favorite role, where he was able to visit the missions in Africa and other parts of the world. He was able to effectively raise awareness and funds. In 1966, he was named bishop of Rochester, New York, by Pope Paul VI as he continued his work on a new television show, The Fulton Sheen Program, which lasted until 1968.

Sheen retired in 1969 at the age of 74 and returned to New York City to teach and lead retreats.

That same year he was named titular Archbishop of Newport, Wales. His most treasured accolade came near the end of his life when on Oct. 2, 1979, Pope John Paul II during his visit to St. Patrick’s Cathedral in New York City embraced the weakened archbishop with the words: “You have written and spoken well of the Lord Jesus Christ. You are a loyal son of the Church.” Archbishop Fulton J. Sheen died two months later on Dec. 9, 1979, at the age of 84.