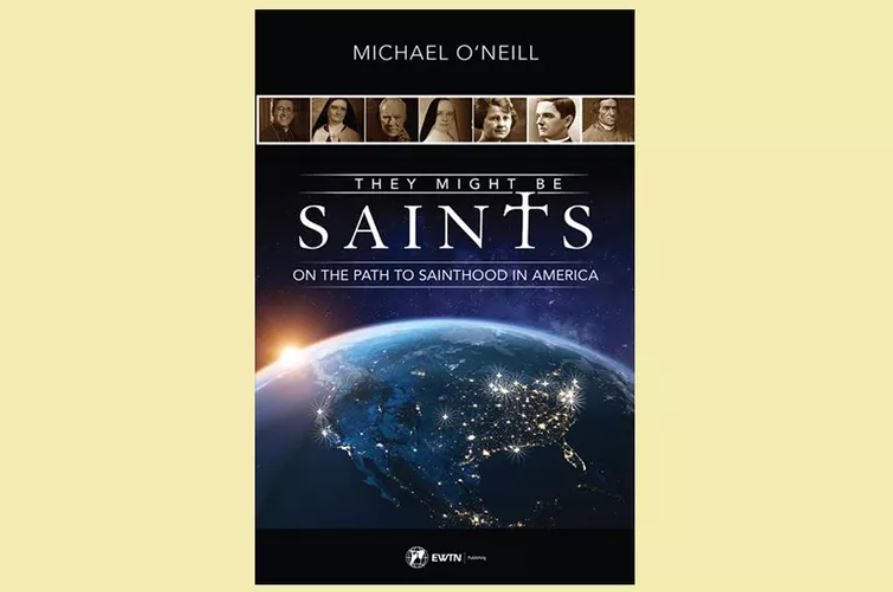 With nearly 100 active causes for canonization currently in the United States, most of which are in the first stage of “Servant of God,” O’Neill puts the spotlight on the six American blesseds and 18 American venerables who one day might be raised to the Church’s official canon of saints.

On the Path to Sainthood in America

Mix together generous portions of drama, absorbing descriptions of people and events, and fascinating facts in one book, and the result in this case will be They Might Be Saints: On the Path to Sainthood in America. The author is “Miracle Hunter” Michael O’Neill whose EWTN series, They Might Be Saints, is the springboard for this new book.

With nearly 100 active causes for canonization currently in the United States, most of which are in the first stage of “Servant of God,” O’Neill puts the spotlight on the six American blesseds and 18 American venerables who one day might be raised to the Church’s official canon of saints. They could someday join the 11 saints who were born, died or spent substantial time in the United States or territories that someday became part of the United States.

As a quick foundation, O’Neill lays the groundwork, explaining the route to canonization as well as the changes through the centuries. In the early Christian centuries, it was the local bishop who would declare a person a saint.

Each chapter begins with a thumbnail chart to introduce the candidate with the basic dates — birth, death, when named “Venerable” or “Blessed,” and by which pope. The real story begins with the very catchy way O’Neill has of introducing and describing these men and women: He makes their stories come alive.

“‘We will be saved,’ Father Frederic Baraga assured his native travel companion, Lewis. ‘Go straight on.’ The frightening sight of a rocky shore loomed ahead with the storm rising on the lake as they struggled in their canoe through the ever-higher waves. Father Baraga had prayed on through several hours of thrashing wind and rain. Soon, ahead, a small, calm river came into the clear. The travelers made it ashore and quickly erected a small Cross of thanksgiving, a marker begetting the name ‘Cross River’…” Thus begins the story of Bishop Baraga, called the “Snowshoe Priest” because he traversed hundreds of miles of snow-covered wilderness each year to minister to his scattered flock. O’Neill adds to the real-life drama with incidents like then-Father Baraga snowshoeing 57 miles with one mission — to baptize a child in danger of death.

Other blesseds and venerables have their own vivid moments showcased. We read that Blessed Francis Xavier Seelos’ “successive appointments as pastor of increasingly larger parishes nor the harshness of the times could change his gentle disposition nor his availability to everyone. He talked for half an hour with the poor woman or with [those] who came to the rectory for a meal. When a fellow brother chided him for wasting his time, Father Seelos replied simply that he could not receive some people kindly and others not. He kept a vigil at the bed of a sick child so the mother could rest, and he did a pile of laundry for another poor woman sick in bed. He gave his gloves away to a poor man he passed on the street. No one was rushed out of the confessional. He sincerely wanted to hear the penitent’s life story and see how he could best advise him.”

When we get to newly Blessed Father Michael McGivney, the author recounts the touching story about how Father McGivney’s involvement with a family of 14 children whose father had died became a seedbed for the saintly priest to form the Knights of Columbus.

The chapters on the 18 venerables in the United States continue in O’Neill’s page-turning style, such as the amazing life of Venerable Pierre Toussaint that shows how a layman doing what is considered ordinary work can rise to sainthood. Brought to New York City from Haiti  as a slave by a French family who eventually gave him his freedom, he would become a much-sought after hairdresser in the city. An admirer wrote that “it was like the confessional to talk to Toussaint; you were so sure of his secrecy. And no matter how friendly we confided in him, he never swerved from his respectful demeanor.” Readers learn how he and his wife, Juliette, were models of perfect charity. And Toussaint had a connection to an American named a saint. Among his generous, charitable works, “he donated to and fund-raised for St. Elizabeth Ann Seton’s new orphanage in New York, even though it only served white children.”

Toussaint’s story perfectly reflects what Blessed Miriam Teresa Demjanovich, a Sister of Charity and native of Bayonne, New Jersey, is quoted as saying in her chapter: “If people only sought God in all earnestness they would find him. And if all would only make use of the ordinary duties and trials of their states in the way God intended they would all become saints.”

Some had tremendous odds to overcome, seen in the witness of Father Augustus Tolton, the first Black African-American priest in the United States. The initial warm reception he had soon turned upside down, enduring heart-wrenching discrimination. Although Father Tolton attended a seminary in Rome where he faced no discrimination, back in Quincy, Illinois, where he became pastor of a mixed congregation, a new dean appointed for Quincy “informed Augustus that he was only expected to minister to blacks, and he must stop accepting whites into his parish.”

‘Padre of the Poor’

Father Tolton, and all these blessed and venerables, come alive in each chapter. None remain two-dimensional cardboard cutouts. Another among these who might be unfamiliar to many, but who had a major impact during their lifetimes and beyond, is Venable Nelson Baker. Often called the “Padre of the Poor,” his work spanned from the later 19th century to 1936.

O’Neill presents this riveting story of what one priest, one person, can do. The plight of poor children at an orphanage for abandoned children and a protectory for delinquent boys in Buffalo led to his becoming a priest and being assigned by the diocese to this mission. (Surprisingly, for a time, he and Father Michael McGivney were both students at Niagara University’s Our Lady of the Angels Seminary — but it is unclear whether they knew each other.)

Father Baker placed himself under the patronage of Our Lady of Victory and would be devoted to Our Lady under this title his whole life. His devotion becomes a strong spiritual lesson, as he saw  answer after answer to his prayers and petitions to Our Lady of Victory: from getting the orphanage out of debt nearly impossible to overcome to finding natural gas on the property for heating when others were ready to give up, to expanding the orphanage, building a home for abandoned unwed mothers and their babies, building a maternity hospital, and providing hundreds of thousands of meals and medical care to incalculable numbers of people. Along with his “City of Charity,” he built the magnificent Our Lady of Victory Basilica (now also a national shrine). We learn to of just one of the miracles he is credited with during his lifetime. In one case, when Father Baker prayed the Rosary by the beside of a nurse in the maternity home who had already been pronounced dead, the woman revived.

O’Neill also gives us two welcome additions. The first ends each chapter — a prayer for the intercession of the blessed or venerable and an address where to report miracles or favors that might lead to his or her beatification or canonization.

The second is the ending chapter, “Saints of the Future: Servants of God,” that lists dozens of those whose causes are in the first stage. One is Toussaint’s wife, Juliette Noel Toussaint. Wouldn’t it be a tremendous blessing to eventually see both of them beatified the same day as the first married couple in the United States to be so honored?

All you holy men and women, pray for us!

March to Be Held Between Paris and...