‘This is about freedom’: EWTN Poland’s director thanks Catholics for helping to unblock YouTube channel 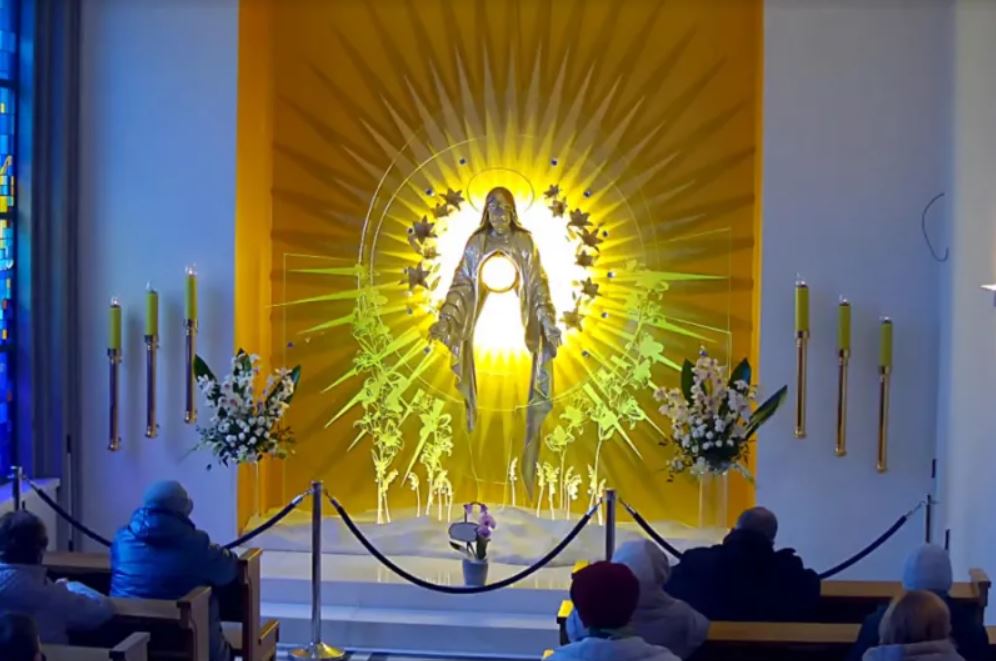 ‘This is about freedom’: EWTN Poland’s director thanks Catholics for helping to unblock YouTube channel

Employees of EWTN Poland were preparing for the Feast of Divine Mercy when they noticed a glitch in their YouTube channel, which brings live perpetual adoration to thousands of people around the world.

Viewers connecting to the live feed saw a black rectangle over an image of the adoration chapel in Niepokalanów, 25 miles west of the capital, Warsaw. The rectangle contained the message: “A recording of this broadcast is not available.”

Since 2018, EWTN Poland — the Polish branch of the global Catholic media network founded by Mother Angelica — has offered 24/7 adoration from the chapel in the basilica of a friary founded by St. Maximilian Kolbe, who volunteered to die in place of another captive at the Auschwitz death camp.

Fr. Piotr Wiśniowski, director of EWTN Poland, received a message from YouTube explaining that it had blocked the channel because of a breach of its community guidelines and that it would be unavailable for seven days.

But when he attempted to contact the online video platform for an explanation, he found it hard to get through to a real person.

“YouTube blocked the whole channel, including the adoration broadcast from Niepokalanów, where St. Maximilian Kolbe lived and worked. We have been broadcasting adoration for over two years and it has many viewers around the world,” he said.

“It’s the biggest online chapel of adoration in the world, over a thousand people who adore the Lord Jesus non-stop, millions of views in Europe, North and South America. Clearly, people felt affected. It turns out that Christians today need such an online community. The blockade caused an international protest whose scope was very wide.”

As the outcry over the blocking of the channel grew, employees at Google, YouTube’s parent company, reached out to Wiśniowski. It appeared that an automated system had flagged EWTN Poland’s channel for a possible breach of copyright.

“Our channel is focused on adoration and prayer,” the priest said. “There are also our journalistic programs and American EWTN programs with Polish translation. Transmissions of the Holy Mass and adoration constitute an important element. Everything is legal and we have rights to everything we broadcast.”

EWTN Poland was able to show that it had a license covering all copyrighted material on the channel. YouTube then restored the channel in time for Divine Mercy Sunday.

Writing on its Twitter account on April 10, EWTN Poland said: “We are happy to announce that DIALOGUE with the YouTube team has restored the adoration of the Blessed Sacrament from Niepokalanów to its place! A big thank you to all those who supported us by passing on and commenting on our case and for prayers.”

Wiśniowski commented: “The united voice of the Polish and foreign Catholic media caused Google to contact me personally. When people started talking to each other, the dialogue brought a solution.”

He added: “You know, I am a Catholic priest. That is, I am here to build reconciliation and peace by preaching Christ. So first of all, thank you for the opportunity for dialogue, for the conversation with one of the Google directors.”

But the EWTN Poland director said that he felt the incident — which generated substantial media attention in Poland — required further clarification.

He said: “Large companies should not simply block or delete accounts. This is not even about religion or Catholics, although we can talk a lot about how we are treated. This is about freedom, which is one of the basic values of all human beings. Without it, we enter a world of enslavement, which is how totalitarianism is born. We should all remember this.”

‘Secrets of the Vatican Museums’ v...