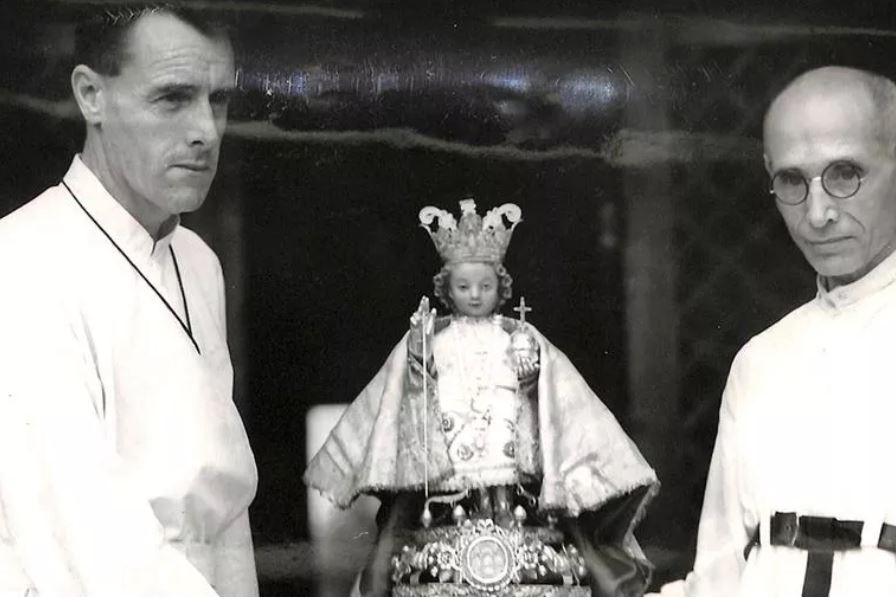 Santo Niño de Cebú, the miraculous statue of the Child Jesus and the devotion that helped make the Philippines grow into one of the largest Catholic populations in the world, is celebrating its 500th anniversary this year.

April 14, 2021, marks the 500th anniversary of Catholicism coming to the Philippines, beginning in Cebu. On this date 500 years ago, and only one week after his arrival in Cebu, which was then called Sugbo, Portuguese explorer Ferdinand Magellan watched the chaplain of his expedition, Father Pedro de Valderrama, baptize Cebu chieftain Datu Humabon, his Queen Juana, their children and 800 of their subjects. What a day it was.

Before the baptisms, Magellan and his chronicler gave a gift to Queen Juana — the magnificent statue soon to be known as Santo Niño de Cebu. Receiving the statue, she was prompted to ask for baptism. This highly venerated and miraculous statue remains the oldest Catholic religious object in the Philippines.

“Finding myself in this important city known as the cradle of Christianity in the Philippines, I want to express my deep joy and profound thanksgiving to the Lord of history,” Pope St. John Paul II said during his homily at a papal Mass in Cebu City 50 years ago in February 1981. He continued:

“The thought … the light of the Gospel has shone with undimmed brightness in this land and on its people is cause for great rejoicing. … God’s providence in the Philippines has been truly wonderful. The Christianization that took place in the 16th century was not something merely accidental. Divine grace was at work when the people of this region had their first contact with the image of the Santo Niño. It is an important historical fact, rich in religious meaning, that on Jan. 1, 1571 the village kingdom of Sugbu was renamed the ‘Villa del Santo Niño,’ and thus the first city of the Philippines was placed under the patronage of the Child Jesus.”

“The whole Church thanks God … that his Name has been glorified here, that true worship has been offered to him, that the Blessed Virgin Mary has been devoutly and lovingly venerated, and that millions of people have been reborn in Christ.”

“In a particular way, the Church thanks God that the tiny Christian community of Sugbu, under the patronage of the Infant Jesus, has now become a flourishing archdiocese of 2 million people, almost all of whom are Catholics. … It can truly be said that growth in faith and Christian living has been until now a constant feature of the Church in Cebu as well as in the whole of the Philippines…”

Magellan had arrived in the Philippines only a week before the mass baptisms. His journey was meant not just to be the first to circumnavigate the world, but to take part in the spice trade and to evangelize peoples the expedition met during the voyage. Two weeks before the baptisms, on one of the other small islands, the fleet wrote about the first Mass celebrated in the area on March 31, which was Easter Sunday that year.

According to the official Augustinian site dedicated to this 500th anniversary which will be celebrated all year, Magellan had “a personal commitment to save souls.” He wasn’t prompted only by King Charles V’s order to convert people. The explorer considered it a personal mission.

Upon his arrival, Magellan at once asked about the religion of the natives. Although Sugbo — better known as Cebu — was busy as a major port of call for Asia, the natives had not adopted any other religion in place of their indigenous one which at least recognized a supreme being. Magellan and Cebu chieftain Rajah Humabon struck up an immediate friendship.

Before Queen Juana was baptized, she was gifted with this small sculpture of the Child Jesus. “Magellan’s chronicler wrote that the queen providentially recognized the presence of the True God in the icon,” and she immediately replaced her idols with this beautiful image of the Santo Niño, which she enshrined. Through her devotion as the first caretaker of the icon of Santo Niño, the Holy Child, the whole place saw the seeds of Christianity not only grow but rapidly flourish.

A small chapel was quickly built for the baptisms on April 14, 1521, and Magellan planted a cross where they were to take place. He was also sponsor of the king who received the Christian name Carlos. The queen took the name Doña Juana. Next their son and daughters were baptized, then 800 others.

Since the 16th century, the Santo Niño de Cebu has been honored with widespread veneration by the Filipinos not only in Cebu but in all of the Philippines, and worldwide. This 500-year-old image is believed miraculous because of the countless answered prayers including healings over the centuries.

Santo Niño, the Holy Child, stands about a foot tall. It is carved of a dark wood in the Flemish style (think Jan van Eyck). Divine royalty that he is, the Child Jesus is dressed in the royal garments like a Spanish king wearing fine brocade clothing. Some of the garments and his boots reflect the military honor Santo Niño was given during the Spanish colonial area when he was named Captain-General, better translated as Commander-in-Chief. (His clothing is a little more elaborate than the Infant of Prague’s similar, changing clothing, whose image dates to less than half a century later in the mid-16th century. Both are believed to be influenced by St. Teresa of Ávila.)

Santo Niño de Cebu has a beautifully simple, tranquil expression that includes a slight smile. He blesses with his right hand. In his left he holds an orb topped by a cross — quite fittingly, because Christianity was coming to cover the world of the Philippines, and from there spread East. Of course, he is crowned. He also appears with various jewels and jewelry which those devoted to him presented as gifts throughout the years.

There was a very early miraculous event when the image seemed lost. Briefly, in 1565 an expedition headed by Miguel López de Legazpi arrived. Five Augustinian priest accompanied the fleet. When General Legazpi set off some artillery, the people got frightened and ran for the hills. Many houses in the village were burned either by them or accidentally by the artillery. Then the wind changed and the fire came under control and was extinguished.

Searching the houses, one of the sailors found three pine boxes untouched by the fire. One box held the Santo Niño de Cebu. Everyone was so overjoyed that they immediately had a precession to the house where the image was found. They erected an altar, and then a Mass was offered. Everybody including natives still in the village attended.

“The miraculous finding or Kaplag (Cebuano term for ‘finding’) had also fired the Augustinians’ hope and courage in their mission of spreading the gospel, and thus, eventually marked the start of the formal evangelization of the Philippines,” recalls the SantoNino500 website. The Kaplag continues to be celebrated annually. And the Augustinians remain in the Philippines.

As the yearlong 500th anniversary celebration started, Augustinian Father Andres Rivera, Jr., the prior provincial of the Province of Santo Niño de Cebú-Philippines, began the event, during which he said, “The image also reminds us of the reception of Christianity by our parents in the Philippines. The devotion to the Santo Niño and our strong Catholic faith is not merely a human endeavor, neither a submission to idolatry, superstitions and religious imperialism, but rather it is fundamentally a gift from God.”

One of the “firsts” came quickly. In May of the year the statue was located, those planning to build the settlement in the town set aside a place for a church and convent “where the Santo Niño image had been found,” states a history of the Basílica Menor del Santo Niño de Cebú, generally called Santo Niño Basilica.

All this began in Cebu, the oldest city in the country and then the first capital of the Philippines and the place where Christianity was first introduced and took firm foundation in the Far East.

“It is a special joy for me to celebrate Santo Niño Sunday with you. The image of the Holy Child Jesus accompanied the spread of the Gospel in this country from the beginning,” Pope Francis told the massive crowd during his homily in Manila on Jan. 18, 2015.

“Dressed in the robes of a king, crowned and holding the scepter, the globe and the cross, he continues to remind us of the link between God’s Kingdom and the mystery of spiritual childhood. He tells us this in today’s Gospel: ‘Whoever does not accept the Kingdom of God like a child will not enter it’ (Mark 10:15). The Santo Niño continues to proclaim to us that the light of God’s grace has shone upon a world dwelling in darkness. It brings the Good News of our freedom from slavery, and guides us in the paths of peace, right and justice. The Santo Niño also reminds us of our call to spread the reign of Christ throughout the world.

“In these days, throughout my visit, I have listened to you sing the song: ‘We are all God’s children.’ That is what the Santo Niño tells us. He reminds us of our deepest identity. All of us are God’s children, members of God’s family.

“For children, as the Lord tells us, have their own wisdom, which is not the wisdom of the world. That is why the message of the Santo Niño is so important. He speaks powerfully to all of us. He reminds us of our deepest identity, of what we are called to be as God’s family.

“The Santo Niño also reminds us that this identity must be protected. The Christ Child is the protector of this great country.

“So he reminds us of the importance of protecting our families, and those larger families which are the Church, God’s family, and the world, our human family. Sadly, in our day, the family all too often needs to be protected against insidious attacks and programs contrary to all that we hold true and sacred, all that is most beautiful and noble in our culture.”

Francis concluded, “May the Santo Niño continue to bless the Philippines and to sustain the Christians of this great nation in their vocation to be witnesses and missionaries of the joy of the Gospel, in Asia and in the whole world.” Amen.
Share With:
Previous Article

Sex is About ‘Mutual Self-Giving a...