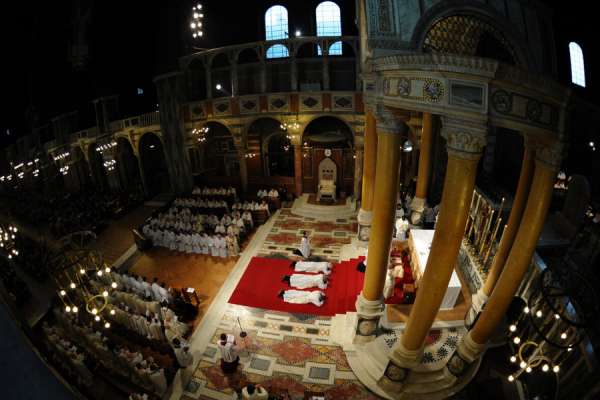 CNA Staff, Jan 15, 2021 / 05:35 am (CNA).- Ten years ago today, Msgr. Keith Newton was preparing to be ordained a Catholic priest at Westminster Cathedral, the mother church of Catholics in England and Wales. It would be an ordination like no other.

The date was Jan. 15, 2011. Up until Dec. 31, Newton had been an Anglican bishop. The next day, he was received into the Catholic Church. On Jan. 13, he was ordained a deacon. Now, he was about to become a Catholic priest.

But not only that: at the ordination ceremony he would be appointed to oversee an entirely new structure within the Catholic Church: the Personal Ordinariate of Our Lady of Walsingham.

On the eve of the 10th anniversary of the ordinariate’s creation, Newton recalled that he was asked to keep his ordination date a secret until after he was received. He worried that no one would be present for the ceremony, at which two other former Anglican bishops — John Broadhurst and Andrew Burnham — would also be ordained as Catholic priests. It turned out that Newton was quite wrong.

“The cathedral was absolutely packed to the doors,” he said in a Jan. 14 interview with CNA. “It was at our ordination Mass that a letter was read out from Cardinal Levada [the then prefect of the Congregation for the Doctrine of the Faith], announcing that the Holy Father had appointed me as the Ordinary.”

“And the ordinariate was erected with the title of Our Lady of Walsingham — and nobody knew that beforehand.”

Newton, a 68-year-old Liverpudlian, described the day as “pretty emotional.”

“The excitement was palpable. There were a lot of people who had come to the Mass who were going to come with us, who were still Anglicans but were hoping to be received eventually. And there were lots of local Catholics as well,” he said.

The then Archbishop Vincent Nichols of Westminster began his homily with the words: “Many ordinations have taken place in this cathedral during the 100 years of its history. But none quite like this.”

“This was a historic moment,” Newton reflected, “not only because we were three serving bishops — other Anglican bishops had been previously received into the full communion of the Catholic Church — but because we were being received into this new structure which Pope Benedict had set up which allowed you not just to become a Catholic but actually to bring something that had nurtured you in the faith into the Universal Church.”

Benedict XVI had authorized the creation of personal ordinariates for groups of former Anglicans in his 2009 apostolic constitution “Anglicanorum coetibus.”

As Newton is married and has three children, he was unable to be ordained as a Catholic bishop. But this was no obstacle to his appointment as an Ordinary.

“To all intents and purposes it is like being the bishop,” he explained. “The only things I can’t do that a bishop can do is to ordain people to the diaconate and the priesthood and to consecrate the chrism.”

“My jurisdiction is slightly different in that it’s not immediate. It’s vicarious on behalf of the Roman pontiff. But I’m an equal member, as an Ordinary, of the bishops’ conference of England and Wales.”

Like a bishop, he can wear a miter. But he pointed out that the miter is not, in fact, reserved for bishops.

“Miters and crosiers are not signs of being a bishop. They are actually signs of jurisdiction. Abbots wear miters and carry crosiers,” he said.

“I’m an Ordinary because an Ordinary is a person who has jurisdiction over an entity. In the Church of England, for instance, an Ordinary doesn’t even have to be a clergyman because at Westminster Abbey the Ordinary is the Queen.”

Newton spent the first 58 years of his life as an Anglican. Born in 1952, he was ordained as a Church of England clergyman in 1976. In the latter half of the 1980s, he served as the Dean of St Paul’s Cathedral in Blantyre, Malawi. In 2002, the archbishop of Canterbury ordained him as an Anglican bishop.

These experiences prepared him to take on the challenge of launching a new structure in the Catholic Church with minimal resources.

“It was starting off from absolutely nothing,” he said. “The first six months were taken up with preparing laity and priests for reception into the Catholic Church, which took place around about Easter of that year, 2011.”

“And then the preparation for clergy to be ordained later in the summer. They had a crash course, from Ash Wednesday until their ordination. And then after that, there was a two-year process of continuing formation. But they were ordained early so that they could pastor the groups they brought in. That was the whole idea.”

At the same time, Newton had to ensure that former Anglican clergy ordained as Catholic priests had someone to live and something to live on. Despite popular notions about the vast wealth of the Catholic Church, Catholicism in England, at least, operates on a shoestring.

“That was a great headache in the first few months, to make sure that everybody had sufficient money to live on and somewhere actually to live,” he said. “But it all worked out in the end.”

In its first 10 years, the ordinariate has grown in some places and “withered away” in others, Newton said. The group has a church in London, where Newton is based, and another in Torbay, Cornwall. But the ordinariate doesn’t have the money to purchase other churches of its own across Britain.

“So what’s happened over the 10 years is that we’ve started to work more with local dioceses in running parishes on behalf of the diocese as well as the local ordinariate group,” Newton noted.

“There are about 25 or 30 parishes in England and Wales that we are the parish priests of on behalf of the diocesan bishop. This gives a way of financing and a place for them to live.”

The ordinariate has its own approved liturgy, incorporating the sonorous prayers of Thomas Cranmer, the first Protestant archbishop of Canterbury. But Masses in parishes run by ordinariate priests aren’t always celebrated according to the Ordinariate Use.

Ever since the ordinariate’s creation, critics have accused it of being “top-heavy” with clergy. Newton said that was a fair criticism, but pointed out that ordinariate priests serve not only ex-Anglicans but also the wider Catholic community through the parishes.

Another common criticism is that the ordinariate has failed to attract the number of Catholic-minded Anglicans that it was expected to 10 years ago. Again, Newton accepted that there was some truth to this.

“If you look at the Church of England, probably many Church of England people just followed what their local parish did and didn’t really have the sort of deep feelings about union with the Catholic Church that many of the priests had,” he reflected.

As an Anglican drawn to the Catholic faith, Newton felt frustrated that Catholic-Anglican dialogue didn’t appear to be leading to greater unity between the two communions.

“In fact, not only was it not coming to anything, but the distance between the Catholic Church and Anglican Church just seemed to be getting larger rather than smaller,” he said.

“So when the Holy Father, Pope Benedict, published the apostolic constitution, it was for us an answer to prayer. It was the fulfillment of our hopes that we could be in union with the Holy See and yet still honor the background which had nurtured us in the Christian faith.”

Newton noted that ordinariate members were “slightly nervous” when Benedict XVI resigned in 2013, just two years after founding the ordinariate. Would his successor take the same interest in the new structure?

Newton said that Pope Francis turned out to be an “encouraging” figure, although there were few Anglicans in his native Argentina.

“He’s promoted a missal for us. He’s changed some of our norms to enlarge our mission. So it continues in the same way, really. It’s part of the Catholic Church now. It’s a constituent part, a structure which belongs to it,” he said.

“We still relate to the Holy Father through the Congregation for the Doctrine of the Faith and they’re still very supportive.”

The ordinariate received a morale boost in October 2019, when the pope canonized John Henry Newman.

“To see Newman’s image above some St. Peter’s Square, a person who — rather more dramatically than us, I imagine — had also been an Anglican clergyman and made the journey to full communion, to be canonized as a saint was an amazing experience. And of course he’s also our patron, so that’s also doubly important for us.”

Newton said that since the canonization more Anglican clergy had contacted the ordinariate inquiring about the possibility of becoming Catholic priests.

“They’ve been younger priests rather than older ones,” he said.

The coronavirus crisis has forced the ordinariate to put its 10th anniversary celebrations on hold, though Newton will celebrate a Solemn Mass and Te Deum on Jan. 16, livestreamed from the ordinariate’s London church at noon local time.

The ordinariate has set out its vision for the years ahead in the document “Our Calling and Our Mission.” It focuses on strengthening the ordinariate’s communal life, vocations and formation, and evangelization.

Newton believes that the ordinariate can make a distinctive contribution to the “new evangelization,” a term popularized by Pope John Paul II.

“I think we can always remind the Catholic Church that evangelization is a lot more than simply getting lapsed Catholics back to church,” he said. “Often that’s the sort of language we hear when actually the Great Commission is to go out to everybody.”

“And in our country, you have many people who’ve got no faith, or have lapsed from any practice of the faith, and our evangelization is about all of them.”

“And I think that’s one of the things that former Anglicans understand. When we were Anglican priests, we had a ministry to the whole parish, not just to the congregation. And I think that’s an aspect of evangelization that we ought to keep in front of people.”