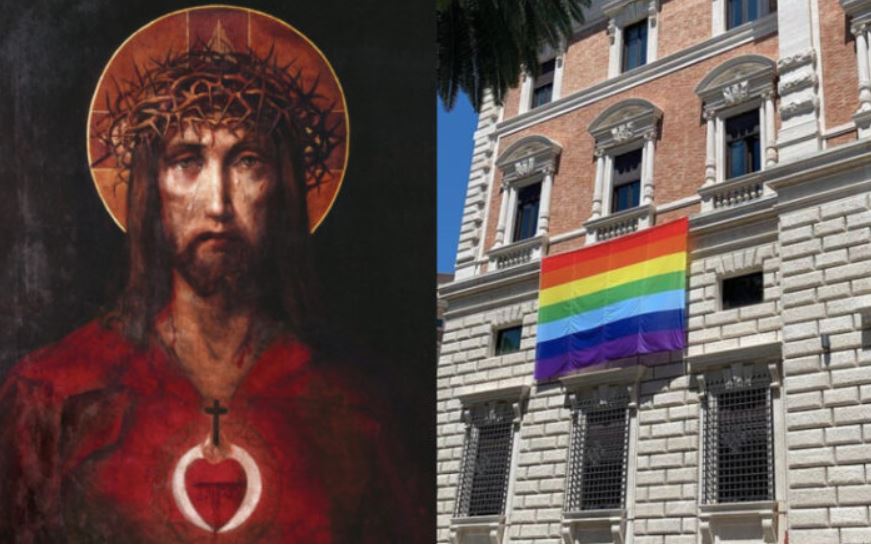 Pray for our country!

The United States Embassy to the Holy See expressed its support for LGBTQ+ Pride Month in social media posts on Tuesday, June 1. Many Catholics responded negatively, as the Catholic Church traditionally dedicates June to the Sacred Heart of Jesus.

Here’s the one of the posts below:

The Instagram post reads, “The U.S. Embassy to the Holy See celebrates #PrideMonth with the Pride flag on display during the month of June. The United States respects the dignity and equality of LGBTQI+ people. LGBTQI+ rights are human rights.”

The post received many negative responses from social media users.

Here’s how some users reacted:

Former Little Rascals actor and practicing Catholic Bug Hall commented on the embassy’s Twitter post. He published a photo of the Sacred Heart of Jesus crowned with thorns.

Hall’s tweet reads, “Pride goeth before the fall. Most Sacred Heart of Jesus, have mercy on us. #PrideMonth.”

Another Twitter user commented, “I’ll never get people who demand that the Catholic Church bless their sins. I’m a sinner, a terrible one, and the whole joy of the faith for me is the sacramental balm of forgiveness, which doesn’t quite work if you rejigger her divine teachings to exclude your particular sin.”

This Twitter user also wrote, “What utter wickedness. How dare you occupy the US Embassy to the Holy See even as you try to destroy souls.”

An Instagram user also commented, “Take that down now. This is blasphemous and heretical. Y’all should be ashamed of yourselves.”

Another Instagram user wrote, “This is contrary to Catholic teaching and a slap in the face to actual practicing Catholics. Funny how you don’t post this flag in Saudi Arabia and other countries…”

This Instagram user added, “What are you doing? This is so wrong. Why don’t you post that June is dedicated to the Sacred Heart of our Lord and Savior Jesus Christ?”

The Catholic Church teaches that people with homosexual tendencies “must be accepted with respect, compassion, and sensitivity,” but that homosexual acts constitute “grave depravity,” are “intrinsically disordered,” and that “under no circumstances can they be approved.” Instead, “homosexual persons are called to chastity.” (CCC 2357-2359)

Sacred Heart of Jesus, please have mercy on us!

European Parliament due to vote on...