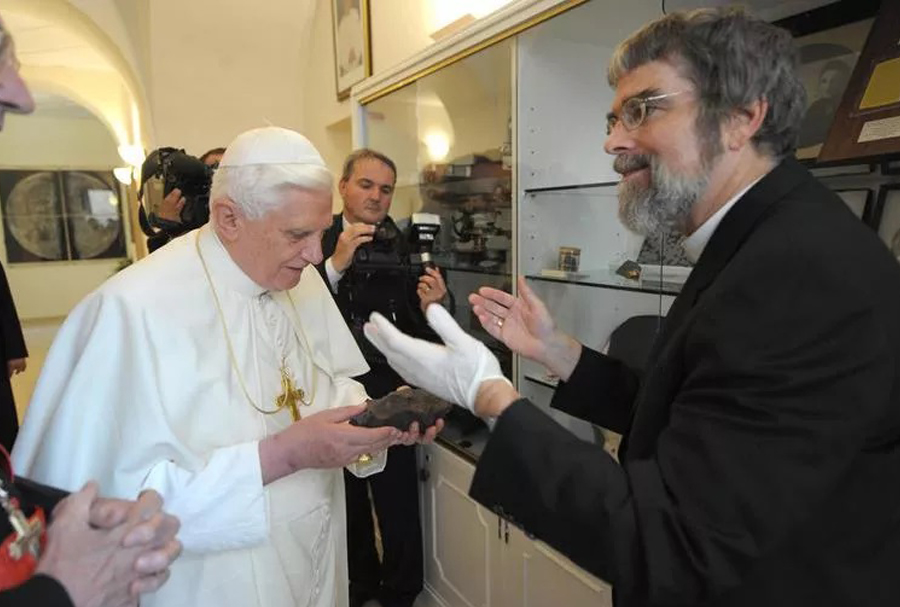 The discovery of astronomers Father Gabriele Gionti and Father Matteo Galaverni ‘could spark a revolution in our understanding of the early universe.

VATICAN CITY — Two Italian priests of the Vatican Observatory have discovered a new mathematical approach that will help astronomers better understand how gravity behaved at the time of the Big Bang when the universe was created — a new finding which, they say, “confirms that our universe appears mathematically ordered and harmonious.”

In their groundbreaking discovery — the latest in a series of achievements at the Vatican Observatory — Jesuit astronomer Father Gabriele Gionti and associate astronomer Father Matteo Galaverni used a new mathematical technique for determining the exponential expansion of the universe soon after the Big Bang — what is known as “cosmological inflation.”

According to a Vatican Observatory (VaticanObservatory.org) press release, scientists have long known about the effects of gravity on large objects in the universe, such as planets and stars, thanks to Albert Einstein’s Theory of General Relativity. But they have not had an accurate picture of the physics describing the very first moments of the universe.

For this, a theory of quantum gravity has been needed — how gravity behaved on a tiny scale (atoms, electrons, and quarks). Such a theory could then be combined with Einstein’s General Relativity to give a clearer picture of the behavior of gravity during the time of the early universe.

The Vatican Observatory said the new findings of Fathers Gionti and Galaverni “do not deal directly with the search for a quantum theory of gravity,” but they do offer a mathematical formula that is superior to previous “alternative” theories, such as the “Brans-Dicke” gravitational theory that “does not always hold” and would only give “approximate” results.

They added that as “cosmological inflation is a consequence of early gravitational fluctuations caused by quantum gravity,” their findings “could have consequences in favor of some particular theory of cosmological inflation among the many that have been proposed.” The priest-astronomers said their particular theory “could be used to discriminate among the different possible theories of quantum gravity that have been proposed by researchers.”

The findings are “completely new,” they said, and determined to be worthy of publication in a prominent journal of astronomy. But they also said “it is just one part of the much broader scientific effort to understand the universe, with many other scientists also publishing valuable research, all the time.

“To really see the impact of this research, and whether it creates a ‘big’ stir, will require time, but the Vatican Observatory is very pleased with the publication and to have been able to make this contribution to scientific knowledge,” they said.

In a press statement, the observatory said the priests’ newly found perspective “could spark a revolution in our understanding of the early universe,” and in particular “offer a fresh perspective on previously formulated theories of the initial rapid expansion of the universe, especially those by the Russian scientist Alexei Starobinsky” (an astrophysicist and cosmologist, Starobinsky pioneered the theory of cosmic inflation, along with two other scientists in 2014). “Moreover,” they added, “they can also advance the search for a more general quantum theory of gravity.”

Confirmation of an Ordered Cosmos

Asked what the faithful could draw from this discovery, perhaps about the nature of the universe and God’s creation, Fathers Gionti and Galaverni said it “confirms that our universe appears mathematically ordered and harmonious.” They pointed out that the cosmos means “order” in Greek, as opposed to “chaos” meaning “disorder.”

“It makes sense for a person of faith to think that this order is the fruit of a creation by a benevolent God,” they said. “He has created the universe with mathematical order and has sent his only begotten Son to further perfect it by taking on this ‘matter,’ which is a ‘product’ of this same created universe.”

But they stressed that this is “not a proof of the existence of God, but an ‘aesthetic’ reasoning, in the sense that from the mathematical beauty of this universe believers are inflamed with a love for God who for love created this universe.”

“As believers, we know that God created this universe in a relationship of Love with the Son and that this Love is actually the Holy Spirit,” the priests explained. “When we do science, it is like finding traces of this Love in the universe and, therefore, a trace of God. This is why we say sometimes that doing research is a form of prayer.”

They recalled the words of 19th-century Catholic astronomer Agnes Clerke, who, when astronomical knowledge was growing and changing rapidly, wrote that even though mankind knows so little compared to what can be known, and even his best ideas today may turn out to be wrong, scientific research “is not to be despised, since by it we reach up groping fingers to touch the hem of the garment of the Most High.”

The astronomers said that “the more we advance in the study of the universe, the more we discover new questions” and that the efforts made to discover the laws of the universe help to “keep alive the fundamental questions that all people carry within themselves.”

They recalled words of Pope Francis to the Vatican Observatory in 2014, in which he said “only a fraction of the global population has access to such knowledge, which opens the heart and the mind to the great questions which human beings have always asked: Where do we come from? Where are we going? Does this universe made up of hundreds of millions of galaxies have any meaning?”

“The search for an answer to these questions can lead us to an encounter with the Creator, the loving Father, for ‘in him we live and move and have our being’ (Acts 17:28),” the Pope said.

One of the World’s Oldest Observatories

The Vatican Observatory is one of the oldest astronomical research institutions in the world, dating back to the reform of the calendar in 1582, when Pope Gregory XIII first consulted astronomers such as Jesuit Father Christopher Clavius. It has existed in its current form since its institution by Pope Leo XIII in 1891 and has been headquartered at the papal summer residence in Castel Gandolfo since 1935. In 1980, due to the light pollution around Rome, another center was opened at the University of Arizona in Tucson.

The observatory says that, to this day, it strives to remain faithful to its mission of witnessing how, in the words of Pope Leo XIII in 1891, “the Church and her Pastors do not oppose true and solid science, both human and divine, but that they embrace, encourage and promote it with all possible commitment.”

Professor Christopher Graney, an adjunct scholar at the Vatican Observatory, recalled a “long tradition” of the Church contributing to science and told the Register that Fathers Gionti and Galaverni “are following in the footsteps of other Catholic scientists who studied gravity.”

As examples, he pointed to Fathers Giovanni Battista Riccioli and Francesco Maria Grimaldi, who performed “the first precision studies of gravity” in the 17th century, and Father Georges Lemaître of Belgium, working from Einstein’s ideas, who developed the Big Bang theory in the 20th century. Father Lemaître’s ideas were later confirmed by the telescopic observations of the American astronomer Edwin Hubble.

Over the last 30 years, the Vatican Observatory, through its Vatican Advanced Technology Telescope (VATT) in Arizona, has been involved in several important contributions to astronomy. These include helping to identify galaxies discovered through the Hubble Space Telescope in the 1990s and surveying open star clusters in the 2000s. In February, the observatory announced the discovery of an object orbiting the sun at a distance of between 3.3 and 4.8 billion miles, which could help to aid scientists in understanding more about the origins of the solar system.

Graney told the Register that that discovery and the research of Fathers Gionti and Galaverni are “certainly helping to remind the world that the Vatican Observatory is here and is doing good science.”  Three staff astronomers — Graney, observatory director Brother Guy Consolmagno and Ileana Chinnici — also recently received prestigious awards for their work.

“So it has been a good year — and it is only May,” Graney said. “All this means that it is a fun time to be at the Vatican Observatory.”