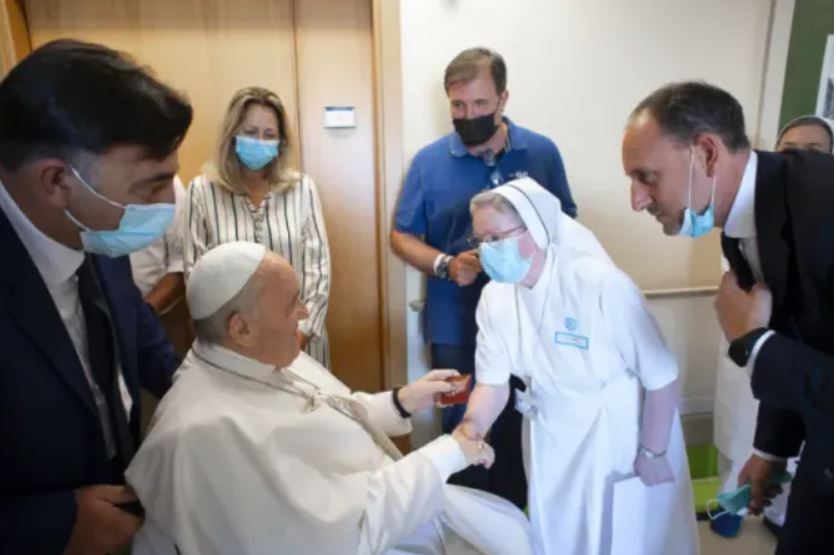 On the pope’s 10th day in the hospital following intestinal surgery, the Vatican said that Pope Francis’ ongoing medical treatment would allow him to “return to the Vatican as soon as possible.”

“The Holy Father is continuing his planned treatment and rehabilitation, which will allow him to return to the Vatican as soon as possible,” Matteo Bruni, the Holy See press office director, said on July 13.

Pope Francis was hospitalized on July 4 to undergo an operation to relieve severe stricture of the colon caused by diverticulitis. The three-hour surgery included a left hemicolectomy, the removal of one side of the colon.

On July 12, the Vatican confirmed that the 84-year-old pope would remain at Rome’s Gemelli Hospital for “a few more days” before being discharged, “to optimize the medical and rehabilitation therapy.”

The Vatican spokesman had originally announced that the pope would spend around seven days hospitalized, “barring complications.”

During the pope’s recovery in the hospital, he has taken time to meet with young patients in the nearby oncology ward, as well as other patients and medical staff on the 10th floor of the Gemelli Hospital, where he is being treated.

Young cancer patients joined Pope Francis as he led the Sunday Angelus from a balcony on the 10th floor on July 11.

“Among the many patients [Pope Francis] has met during these days, he addressed a special thought to those who are bedridden and cannot return home: May they live this time as an opportunity, even if experienced in pain, to open themselves with tenderness to their sick brother or sister in the next bed, with whom they share the same human frailty,” Bruni said in the latest health update from the Vatican.

While in hospital, the pope has been staying in a wing reserved for papal medical emergencies, in the same suite where St. John Paul II stayed for medical treatments in different points of his pontificate.

This was Francis’ first major operation during his pontificate. In 2019, he had an outpatient surgery for cataracts and he occasionally suffers from flare-ups of sciatic pain.

“In these days of being hospitalized, I have experienced how important good healthcare is, accessible to all, as it is in Italy and in other countries,” Pope Francis said in his first public appearance after his surgery.

He also expressed his appreciation and encouragement to doctors, healthcare workers, and hospital staff.

“They work so hard,” the pope said.

Fulton Sheen and the Specter of Co...