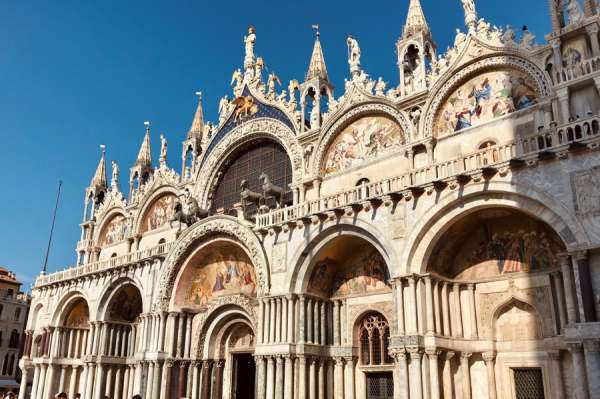 Rome Newsroom, Mar 25, 2021 / 05:00 pm (CNA).- Venice traces its founding back to 1,600 years ago when the cornerstone of its first Catholic church was laid on the feast of the Annunciation.

The Italian city of canals and lagoons celebrated its 1,600th anniversary Thursday with a Mass in St. Mark’s Basilica.

The Patriarch of Venice, Francesco Moraglia, said in his homily on March 25 that the city of Venice was built on “foundations that were not only human and therefore transitory, but in some way transcendent.”

“Venice wanted to link its beginning and its history to a foundational event of the Christian faith and so the city joined the Mother of Jesus, Mary, with whom it will always maintain a direct and uninterrupted thread,” Moraglia said.

According to tradition, Venice was founded on March 25, 421, when construction began on the Church of St. Giacomo on the island now known as the Rialto. The patriarch noted that an 11th-century text describes this founding as the Monday in Holy Week.

“That at its beginning Venice ‘identified’ itself, in a certain sense, with the construction of a church tells us how the city was perceived not as an absolute reality. On the contrary, it means that there is something that is above her, comes before her, and remains after her,” the bishop said.

“The original event — the building of a church — tells how the dimensions of Christian faith and hope are recognized as publicly relevant … and not subordinated to political power,” he said.

The patriarch pointed to the many artistic depictions of the Annunciation that can be found in churches and civil buildings in Venice from over the centuries.

He highlighted in particular the Basilica of Santa Maria della Salute (Holy Mary of Health), located between Venice’s Grand Canal and the Giudecca Canal, where an inscription in the floor of the basilica states: “Unde origo inde salus.”

“That is: from where (Venice) originated, from there, (from Mary), its salvation came,” Moraglia explained, noting that this church was dedicated to Our Lady of Good Health, whom Venetians say rescued the city from a terrible plague in 1630.

The patriarch said that the city — which has been hard hit by both the coronavirus itself and the resulting loss of tourism — is once again facing difficulties.

“We are living through difficult years. To find something similar we have to go back to the years after the Second World War. We live in a time when we need true hope, the one with a capital H, not a counterfeit or a substitute for it. We need human and Christian hope like the air we breathe and, in these times, we have discovered that even breathing is never to be taken for granted,” Moraglia said.

The Patriarch of Venice added that this 1,600th anniversary year is “an opportunity that is offered to us to start over so that the city can restart and rebuild itself as a civil community (civitas) starting from its values.”

The city of Venice has more than 200 events scheduled — coronavirus permitting — for the year ahead to mark the anniversary.

“We trust in the maternal intercession of Our Lady of the Venetians, our dear Holy Mary of Health,” he said. “Happy birthday, Venice!”