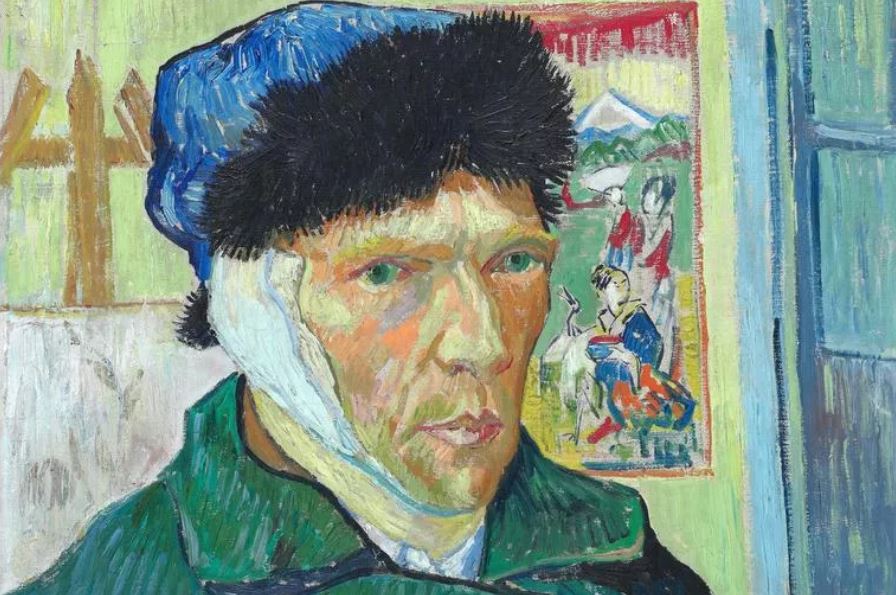 “Be clearly aware of the stars and infinity on high,” said Van Gogh. “Then life seems almost enchanted after all.”

The artist Vincent Van Gogh seems to be on everyone’s minds these days.

Across the United States and around the world, several “Immersive Van Gogh” exhibits have offered art enthusiasts a modern-day take on the artist’s familiar character studies and fields of flowers. This newest iteration of the artist’s masterpieces is a contemporary light show, replete with colorful images of “The Starry Night” and other familiar works that slide across walls and floors and ceilings. Accompanying the art show is lilting music; in some venues, the sensory experience is enhanced by floral scents and virtual-reality headsets.

Also in the news: In September 2021, a previously unseen Van Gogh sketch went on display in Amsterdam. Titled “Study for Worn Out,” the pencil drawing — which had been in a private collection for more than a century — depicts an exhausted old man sitting slumped over on a wooden chair, his head in his hands.

The Artist’s Brief Career in Ministry

Vincent Van Gogh was indeed a gifted artist; but he may not have taken up the brush at all, had he not failed at his earlier career as a missionary. From his early years in a Dutch Reformed household, Vincent had a fervent faith. Despite failing the entrance exam for seminary, he set out on his own to minister to Belgian coal miners. Deeply touched by the miners’ impoverished living conditions, Van Gogh gave them all of his possessions, including most of his clothing.

But Van Gogh’s personal sacrifices did not impress leaders in the Dutch Reformed Church. Rather, they considered his overarching generosity to be “odd” and even “excessive.” Just three years after he began his missionary journey, Van Gogh’s church hierarchy rejected him — taking issue with his overzealous giving, his inelegant manner of speech, and his poor apparel. In 1879, embittered by their cold reception, he left the church.

The Faith That Sustained the Post-Impressionist

But while he no longer served in public ministry, Vincent Van Gogh retained his deep faith. In a letter to his brother Theo, Vincent wrote, “I am still far from being what I want to be, but with God’s help I shall succeed.” Despite his rejection by his own church, he clung to his connection to the Lord.

“One cannot do better,” he wrote, “than hold onto the thought of God through everything, under all circumstances, at all places, at all times, and try to acquire more knowledge about Him, which one can do from the Bible as well as from all other things.”

Van Gogh took up the paintbrush with the goal of celebrating God’s creation. And in fact, many of his works are decidedly spiritual — whether stories from the Bible, or renditions of the beauty of creation. Included among his works are biblical scenes like “The Good Samaritan” and “The Raising of Lazarus” and “The Sower.” In “The Angelus,” Van Gogh’s painting fashioned after the work of artist Jean-François Millet, a farmer and his wife stand in the foreground with heads bowed in prayer, a basket of potatoes at their feet. In the distance, a church steeple is clearly visible.

While some of Van Gogh’s works are personal interpretations of Scripture, others are celebrations of beauty. Musing on his classic “The Starry Night,” the artist said, “Be clearly aware of the stars and infinity on high. Then life seems almost enchanted after all.”

How Van Gogh’s faith was reshaped through his life is a matter for some discussion. Christian writer Joseph Hartropp wrote of the artist:

Van Gogh was certainly religious, although his beliefs did change with time. … Vincent ultimately came to see nature and human history as jointly symbolizing ‘God.’ Not a defined god, but ‘something up there’ — something that can’t be named. Actually, an extremely modern stance for the time.

William Havlicek, author of Van Gogh’s Untold Journey, saw it differently. “Vincent was a very generous man,” Havlicek wrote. “He understood that unconditional love of God extended to unconditional love for others. He would never recognize love that was not an action.”

Havlicek doesn’t buy into the common narrative which describes Van Gogh as mentally unstable and emotionally unfit. Instead, he describes him as “an unknown, adventurous, deeply compassionate man whose essence seems to have been lost in the dramatic and often apocryphal stories surrounding his illness and early death. My effort is to resurrect an unknown aspect of Vincent — one that is even heroic and certainly praiseworthy…”

Indeed, there is reason to regard Van Gogh as ambivalent. He once wrote, “For my part I know nothing with any certainty, but the sight of the stars makes me dream.”

On the other hand, in June 1888 he wrote to his friend Emile Bernard, “You do very well to be reading the Bible.” And why was this so important, in Vincent’s mind? Later in that lengthy letter, he explained:

Christ alone, of all the philosophers, magicians, etc., has affirmed eternal life as the most important certainty, the infinity of time, the futility of death, the necessity and purpose of serenity and devotion. He lived serenely, as an artist greater than all other artists, scorning marble and clay and paint, working in the living flesh. In other words, this peerless artist, scarcely conceivable with the blunt instrument of our modern, nervous and obtuse brains, made neither statues nor paintings nor books. He maintained in no uncertain terms that he made … living men, immortals. That is a profoundly serious matter, the more so as it is the truth.

Not the words of a man who took God lightly.

How to Be Equipped, Empowered and...