‘We Must Never Lose Hope’: Meet the New Rector of Walsingham 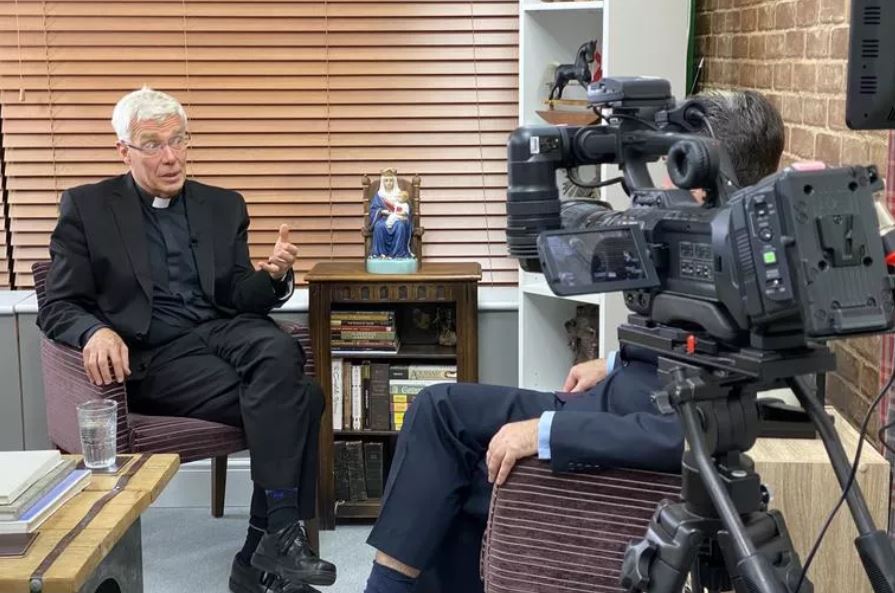 ‘We Must Never Lose Hope’: Meet the New Rector of Walsingham

In the year of COVID-19 Msgr. Philip Moger takes over at the Marian shrine.

LONDON — In November 2019, Msgr. Philip Moger took a call that changed his life. His bishop, Bishop Marcus Stock, was on the other end of the phone asking Msgr. Moger to come for a chat. During the subsequent discussion, he was invited to become rector of England’s chief Marian shrine at Walsingham. After some further discussion and discernment, Mgr. Moger was on his way to the Norfolk.

Msgr. Moger was “very surprised” by his appointment, he told the Register this week, adding that this new appointment came “completely out of the blue,” especially as he was only 10 weeks into an appointment as pastor of a new parish.

Msgr. Moger arrived at Walsingham in September 2020. But 2020 was no normal year. The shrine was largely empty as the COVID-19 pandemic still raged across England.

He explained: “The much smaller number of pilgrims in the late summer, before the current lockdown, meant that I didn’t see the shrine at its normal pace in September when I arrived.” This is an understatement, as a national lockdown and the subsequent restrictions meant that a shrine that once welcomed hundreds of thousands of pilgrims each year now hosted a mere trickle of day-trippers.

From the beginning of lockdown, however, the shrine quickly adapted to providing online resources and liturgies to the wider Church. “From the first lockdown in 2020,” observed Msgr. Moger, “there has been a substantial provision of livestreamed activities, in addition to daily Mass, devotions, exposition of the Blessed Sacrament and the Divine Office. This has brought Walsingham to the attention of many who were barely aware of Our Lady’s shrine, as well as those who missed being here physically.”

The new rector of the shrine is aware that Walsingham is not just one among many English shrines to Our Lady. As he said, “It’s the national Marian shrine for England, so it has a unique and dedicated focus of prayer and devotion to Our Lady in our country.” This being the case, how does he see his new role as rector of that shrine? “Thankfully, my predecessor [Msgr. John Armitage] ensured that the shrine has a strong infrastructure, which leaves the rector to oversee the provision of liturgies and devotions, to welcome visiting priests, bishops and pilgrims and to work with the Franciscan friars, religious and lay staff who also work at the shrine.”

Msgr. Moger senses Walsingham has a particular message for these dismal times, namely, that

“we must never lose hope. Remember Our Lady, our patron, who, though she didn’t know what the future held, knew who held the future.”

The rector is responsible for Walsingham’s spiritual mission, but he also has to deal with many practical responsibilities, not least the financial ones attached to the shrine. Surely, no pilgrims equates to no income? “Yes, indeed,” replied Msgr. Moger, “the shrine is entirely reliant on the donations and offerings of the faithful for its upkeep, ministry and outreach.” But, since the start of the pandemic, there has been a welcome generosity of response from many across England and beyond during the lockdown, no doubt including from many who have come on pilgrimage to Walsingham in the past. “People have been very generous via the phone, online or with cash, so that at the end of our financial year (December 2020), we broke even on our operations,” reported Msgr. Moger, before adding, “January 2021 is a new beginning, and challenges are ahead of us!”

Discovery of a Vocation

Born in 1955, Msgr. Moger grew up in Halifax, in the northern English county of Yorkshire. At age 5, he lost his mother and was subsequently raised by his grandmother and father. His first intimations of a priestly vocation were while he was still very young, at only 8 years old; this call returned again even more strongly as a teenager. Still, he began his working life in a bank, but this was not to last. In his early 20s, believing God was calling him to the priesthood, Moger entered Ushaw Seminary in County Durham.

Father Moger was ordained in 1982. After that, he exercised his priestly ministry in the Diocese of Leeds, serving in a number of both inner-city and suburban parishes. One of the parishes to which he was assigned was St. Cuthbert’s parish in Bradford. This was the parish founded in 1919 by Msgr. John O’Connor, a priest instrumental in receiving many famous converts into the church, not least G.K. Chesterton. In fact, Msgr. O’Connor was the model for Chesterton’s priest detective Father Brown.

One of the more-high-profile roles Msgr. Moger has been given was during the visit of Pope Benedict XVI to the United Kingdom in 2010. Two days before Christmas in 2009, Msgr. Moger received a call from his then-bishop, Bishop Arthur Roche, asking him to take charge of liturgy for the coming papal visit. Msgr. Moger has fond memoires of that visit. “It was a wonderful experience,” he recalled. “The Pope depended utterly on the Holy Spirit and on other people to smooth the way for him. There was a calmness about his presence.” Msgr. Moger remembers in particular “the absolute silence in Hyde Park” during the papal-led adoration of the Blessed Sacrament that took place at the park in the heart of London.

In 2008, Msgr. Moger was appointed dean of the Leeds cathedral. His future seemed settled when he was appointed last year to a new parish in the Leeds Diocese. Then the telephone rang, with his bishop proposing the possibility of a different mission.

Msgr. Moser’s appointment to Walsingham moved him from a busy city parish to the quieter, decidedly rural life at the Norfolk shrine in a new diocese. However, Msgr. Moger feels that this major change in his life has not yet fully started due to the unexpected and ongoing restrictions of COVID-19. What the “new normal” will be once this current pandemic passes, and, in particular, what future implications the virus will have for the shrine and for pilgrims traveling there is unclear. But the monsignor remains hopeful, nevertheless.

Regardless of what does happen in the future, Msgr. Moger sees Walsingham playing its part in rebuilding the Church in England in the months ahead. “We don’t know when things will be back to ‘normal’; we don’t know what the new ‘normal’ will be,” he said. “But we shall still be here to offer comfort to the weary, solace to the afflicted and the message of Our Lady: ‘Share my joy in the Annunciation’ — God reaching down to humanity in order to raise humanity to where he is. God makes so many things depend on his creatures; he will still have need of us!”