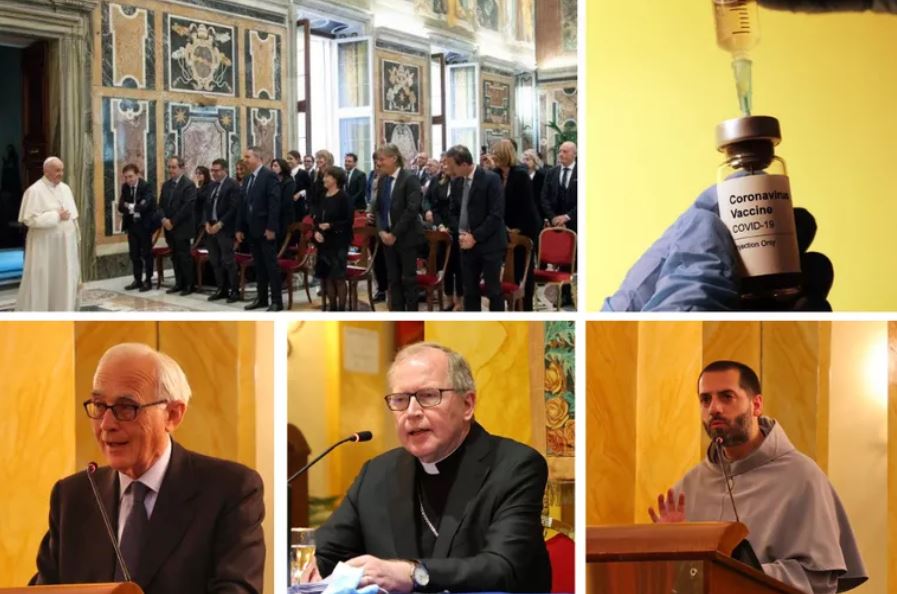 Church leaders and theologians who spoke with the Register indicate that the Holy Father’s arguments in support of conscientious objection for health professionals might also have an application in the context of abortion-tainted vaccines.

VATICAN CITY — Could a health-care worker’s right to conscientiously object to assisting in an abortion be licitly extended to those who object to taking abortion-tainted COVID-19 vaccines, therefore allowing them a religious exemption?

In a recent address to Italian pharmacists, Pope Francis firmly upheld the right to conscientious objection for health professionals in the context of abortion, arguing that such a right “should never be negotiated” and acts as a “denunciation of the injustices done to the detriment of innocent and defenseless life.”

Noting that some medicinal substances “can become poisons,” the Pope reminded members of the Italian Society of Hospital Pharmacy on Oct. 14 that they are “always at the service of human life” and so their work can in some cases lead to “conscientious objection which is not disloyalty but, on the contrary, fidelity to your profession, if validly motivated.”

Abortion is “homicide and it is not licit to become an accomplice,” the Holy Father said while stressing that conscientious objection in this area of healthcare is a “very delicate issue” and that it must be “validly motivated.”

The question regarding whether the Holy Father’s remarks on conscientious objection and abortion can be applied to COVID-19 vaccines has yet to be answered directly. All the COVID-19 inoculations produced so far are tainted with abortion to varying degrees in that their production and, or, testing has utilized tissues derived from the stem cells of babies aborted in the 1970s.

Although the Congregation for the Doctrine of the Faith issued guidance last December, stating it was “morally licit” to take these vaccines primarily because cooperation in evil in the procured abortion was “remote,” some Catholics have concluded they cannot, in good conscience, receive them.

Such faithful believe they would be accomplices to abortion were they to receive them as they contend that their use involves the “ongoing commercialization” of an  unborn child’s bodily remains, and that taking the vaccines contributes to the culture of death.

This emphasis on conscience rights has remained salient as mandatory vaccinations and other policies aimed at coercing people to take the vaccine have increased and some Catholics have sought religious exemptions, often in the face of losing their employment.

The Congregation for the Doctrine of the Faith recognized these and other concerns, commenting in the December 2020 doctrinal note that vaccination “is not, as a rule, a moral obligation and that, therefore, it must be voluntary,” and that “for reasons of conscience” some of the faithful “refuse vaccines produced with cell lines from aborted fetuses.” But such conscientious objectors, it stressed, “must do their utmost” to take other measures to help prevent the spread of the virus.

Theologians contacted by the Register all agreed with the notion that the right to conscientious objection for health-care workers could be extended to those who cannot take the vaccine in good conscience, but some added a cautionary caveat.

Rome-based Italian theologian Father Giórgio Ghio believes that the Pope’s words on conscientious objection could, in his opinion, be extended to the COVID-19 vaccines, “especially since [Pope Francis] clearly states that medicinal substances can turn into poisons and reiterates that abortion is murder, regardless of the ends and circumstances.”

Father Ghio noted that the CDF guidance “explicitly admits that Catholics can refuse vaccination for reasons of conscience,” and he highlighted the CDF’s emphasis on the vaccination being voluntary. “Forcing people to vaccinate is objectively contrary to the moral law,” he said.

Father Serafino Lanzetta, a professor of dogmatic theology resident in the diocese of Portsmouth, England, agreed that people have the right to “decide in conscience” whether to receive the vaccine, just as health-care workers do when it comes to refusing to be an accomplice to abortion. Asked if he agreed the Pope’s words on conscientious objection should therefore apply to the vaccines, he said, “He should extend it, yes I do agree.”

Father George Woodall, professor emeritus of moral theology at the Pontifical Athenaeum Regina Apostolorum in Rome and a priest of the Diocese of Nottingham, England, underlined the importance of the Pope’s cautionary words to the Italian pharmacists that conscientious objection be “validly motivated.” Father Woodall warned of the danger of “leaping into making an objection which might not be justified,” especially where there are “strong feelings, serious political division and even prejudice.

“Simply to embrace a ‘no vax’ attitude for political or ideological reasons would not justify conscientious objection,” he said, and argued that such opinions “need to be examined very critically in conscience, precisely to exclude operating or acting on such a basis.”

“As those who laudably oppose the scourge of abortion rightly point out, conscience is not to be reduced to mere feelings,” Father Woodall explained. “It is an act of right reason, judging whether an act is morally right or wrong, which demands that we ensure that it is truly an act of right reason. Nor does the opposition to procured abortion, something always required and always legitimate, mean that every action connected to or related to such an abortion is itself necessarily immoral.”

He made the distinction between formal and direct cooperation in a gravely immoral act such as abortion, which is always immoral and never permissible, and material cooperation that has no direct contribution to the termination of a pregnancy or its preparation.

“Yet, when all this is said, there may well remain people who are honestly convinced that the systematic compromises with abortion by governments, health authorities, scientists and technicians has been, and is such, that they ought to exercise conscientious objection in this matter of anti-COVID vaccines,” he said.

The Catechism of the Catholic Church teaches that every person “has the right to act in conscience and in freedom so as personally to make moral decisions.” It adds: “He must not be forced to act contrary to his conscience. Nor must he be prevented from acting according to his conscience, especially in religious matters” (1782).

The Catechism later goes on to state: “A human being must always obey the certain judgment of his conscience. If he were deliberately to act against it, he would condemn himself. Yet it can happen that moral conscience remains in ignorance and makes erroneous judgments about acts to be performed or already committed” (1790).

Those opposed to applying conscientious objection rights in the case of COVID-19 vaccines, such as bioethics professor M. Therese Lysaught at Loyola University in Chicago, believe that those who do so are not serving God and their neighbor, are cherry-picking Catechism and other teachings, and acting out of ignorance and a poorly formed conscience. Some bishops take a similar approach, including San Diego Bishop Robert McElroy and Cardinal Blase Cupich of Chicago.

But others have made statements in support of such an exercise of conscience, including the Colorado Catholic Conference which has issued a template priests can sign for those seeking a religious exemption. Auxiliary Bishop Athanasius Schneider of Astana, Kazakhstan, has also offered to sign a personalized affidavit for any Catholic who believes abortion-tainted vaccines are gravely immoral.

Bishop Schneider has led the way in conscientiously objecting to the vaccines due to their abortion links, rejecting the view propounded by the CDF that taking the vaccines is remote material cooperation and therefore licit for most anti-COVID vaccines. He contends that by taking any vaccine that has utilized abortion-derived tissues, however remote that may be, mankind is physically benefitting “from the ‘fruits’ of one of the greatest evils of mankind — the cruel genocide of the unborn.”

He and others are concerned that Church leaders’ approach to the vaccines will make abortionists and those responsible for biomedical research “conclude that the hierarchy has acquiesced to this situation, which includes an entire chain of crimes against life and indeed can aptly be described as a ‘chain of death.’”

Professor Roberto de Mattei, a lecturer in Church history at the European University of Rome who disagrees with Bishop Schneider’s view and has written a booklet arguing that taking the vaccines is morally licit, nevertheless supports conscience rights, as well.

“If you have a religious objection, a moral Catholic objection of conscience — for example, you follow the idea of Bishop Schneider and in good faith you’re convinced getting the vaccine is a sin … then any Catholic has the right to follow his conscience, also if it is a mistaken conscience, because otherwise if you don’t follow it, you commit a sin,” De Mattei told the Register at an Oct. 23 Rome conference on COVID-19 and vaccination hosted by Voice of the Family. “So I think it’s important to respect this specific case of conscientious objection.”

Like Father Woodall, he also made the point that the conscience should be based on religious principles and moral conviction, and not on the basis of political objections.

Various vaccine mandates have been imposed across the world. In September, President Joe Biden ordered sweeping new federal vaccine requirements for as many as 100 million Americans, covering private-sector employees as well as health-care workers and federal contractors.

In Italy and the Vatican, a Green Pass was imposed on all workers (and visitors to the Vatican) in October, whereby a certificate must be shown proving vaccination, a negative COVID-19 test, or recent recovery from the disease. The introduction of the pass has been controversial and drawn widespread protests across Italy and especially in the port city of Trieste.

So far the Vatican has not publicly defended a right of religious exemption for those who conscientiously object to taking abortion-tainted vaccines. Its decree issued Sept. 28 imposing its own pass on all Vatican employees and visitors, only allowed for a medical exemption.

Father Lanzetta is among those who disagrees with the Green Pass policy, telling the Register that he sees it as contradicting the authorities’ own claim that the vaccines are not mandatory, and therefore not allowing the public to make a consciously free choice.

Those who do not comply are “punished, they are fined, they are not paid,” he said. “So what about their possibility to choose in conscience? If you’re not getting vaccinated, you can’t choose freely, because it’s an imposition, although masked as an indirect imposition.”

The Register asked Vatican Secretary of State Cardinal Pietro Parolin if the Vatican would be introducing such a religious exemption in the Roman Curia, one that could also possibly be used in Catholic institutions worldwide. He responded by simply referring to the policy set forth in the Sept. 28 decree, and the December 2020 CDF “note on the morality of using some anti-COVID-19 vaccines.”

Cardinal Willem Eijk of Utrecht, Holland, who is a trained physician and member of the Pontifical Academy for Life, is a firm believer that COVID-19 vaccines should be voluntary, even though he believes, like Pope Francis, that it is a “moral obligation” to be vaccinated.

He told the Register Oct. 23, “You have to respect conscientious objection in the way that you’re not allowed to force people to get vaccinated.”

Cardinal Eijk said he supports the Green Pass requirement, as long as it offers “an alternative to overcome the problem of the conscientious objection against the vaccines.” He said this would be the case if frequent tests were also allowed as a substitute, but only if they were offered free of charge.

In the Vatican, the costs must be met by the employee or visitor and the refusal of workers to obtain a Green Pass incurs suspension without pay.