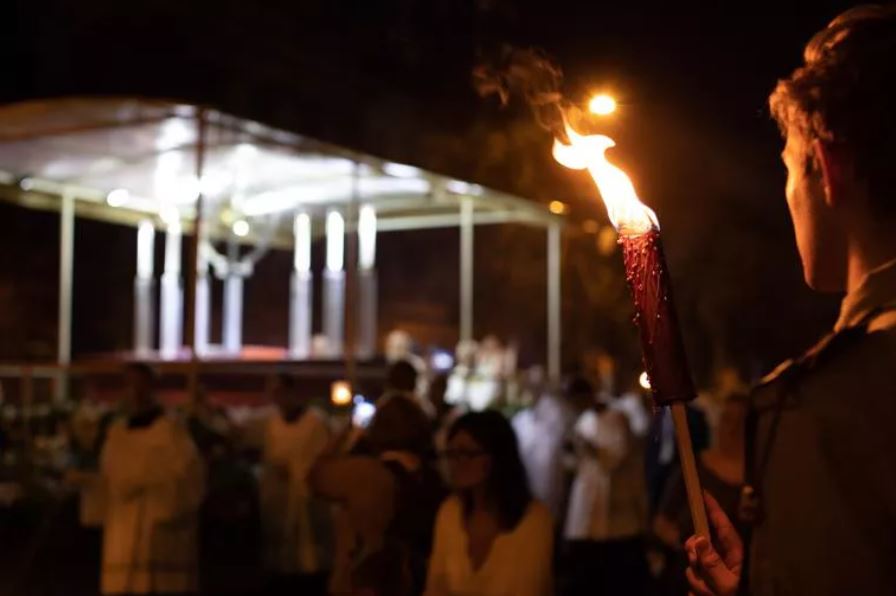 COMMENTARY: A wonderful event that gave hope to hundreds of thousands of pilgrims in the heart of secularized Europe was unfortunately promoted by many as a ‘liberal’ Pope meeting an ‘illiberal’ prime minister.

It has been one week since the papal plane landed on Hungarian soil and brought Pope Francis to Budapest, where he celebrated the concluding Mass of the 52nd International Eucharistic Congress.

If one looked at the coverage of the Congress, however, many of the eyes of the mainstream press were fixed on the meeting of the “liberal” Pope Francis and the “illiberal” Hungarian Prime Minister Viktor Orbán.

This resulted in an unfortunate politicization of a wonderful event that gave hope to hundreds of thousands of pilgrims in the heart of a secularized European continent.

As always, the anti-Christian mainstream media and its promoters were very creative in finding ways to divert attention from what actually occurred during the Congress and between the leader of the Catholic Church and the leader of a new “European Christian political bloc.” They had several reasons for this manipulation as neither event fits into their desired narrative. Let’s see why.

This year was, in fact, the second time Hungary hosted a Eucharistic Congress. The first one was held on the eve of the Second World War in 1938. The 34th Eucharist Congress in Budapest would be one of the last public expressions of European Christendom before the beginning of a very dark era of persecution, suppression and hardship. Little did the planners know, that the memory of those days would serve as hope for the faithful suffering under the Nazi occupation or the brutal Soviet communist oppression afterward.

Historic figures like Cardinal József Mindszenty, reinforced by the experience of the Congress of 1938, have since become part of the country’s common memory. Thus, the organizers of the most recent Congress, which had had to be postponed one year due to the pandemic, knew that a very serious legacy was at stake. Not only did this Congress represent an enormous opportunity to strengthen the faithful, it also could prove that Catholicism does not only have a shining past, but a hopeful future in Hungary. Those who had the fortune to be there at the candlelight procession on Sept. 11 or the papal Mass the day after, had no doubt that the Congress, as an American pilgrim observed, “was thus a statement about the rebirth of Hungary and the persistence of faith.”

This “rebirth” is vital as, despite the current political rhetoric, religiosity in Hungary is not significantly better than in the West. There are several reasons behind this reality. The first lies in Hungary’s experience with “Goulash Communism.”

After Hungarian freedom fighters revolted against communism in 1956, the Hungarian regime changed tactics. Instead of the harsh oppression it utilized before, the “reformed” regime aimed for compromise in exchange for economic benefits.

Due to the relatively wide range of traveling and economic opportunities, and the relaxing of open ideological oppression, Hungary became known as the “happiest barrack” in the Soviet bloc. This led to a tragic paradox: In countries like Poland or Romania, where the political systems continued to persecute Christianity, the resistance grew, while in Hungary, the seemingly more tolerant “Goulash Communism” weakened resistance to the regime and political system.

Although the Church went through a revival after the regime change, the Church did not keep up with the newest challenges of the world, due to the 45 years of separation behind the Iron Curtain. Most importantly, she failed to realize that her future was in the cities rather in the old structure of the rural parish system.

This year’s Eucharistic Congress, however, marked a notable step in this realization process as everyone could see that although a many of the participants came from rural areas, the organization and the most dynamic (also youngest) communities to promote and execute the event were urban.

Since the Orbán government prides itself on preserving Hungary’s and the West’s Christian heritage against the insanity of unfettered progressivism, it would have been incredible for it not to lobby for and support such an event. In fact, one would be hard-pressed to find a government in Europe that supports Catholic values more than the Hungarian government. Although politics will always approach civilizational and cultural questions from a different perspective than the Catholic Church, they have been able to find common ground in areas such as strengthening large families by encouraging the youth (through sustainable financial means) to have more children, helping persecuted Christians, and maintaining the conversation about the Christian roots of Europe.

However, because of the Hungarian government’s strong opposition to mass migration, many awaited a clash between Orbán and the Latin American Pontiff, who is known for urging Western leaders to open their borders to immigrants.

Much to the disappointment of the press, this clash did not happen. It would take hours to compile a list of those “unbiased” articles that at first, doubted the papal visit, and then that the Holy Father wouldn’t meet Orbán and finally assured the reader that the Pope would then definitely go to challenge “thugs” like Orbán.

The narrative even went so far as to present the length of the visit (Pope Francis only visited Hungary for seven hours while visiting Slovakia for three days) as a papal signal to Hungary’s “populists.”

What actually occurred during the congress contrasted those predictions. The meeting between Pope Francis (accompanied by Cardinal Pietro Parolin, the Vatican’s secretary of state, and Archbishop Paul Gallagher, the secretary for relations with states) and Hungary’s political leadership, lasted longer than expected in a “cordial atmosphere.” Later both sides revealed that they talked primarily about ecology and Hungary’s pro-natal policy.

During his return to Rome, Pope Francis spoke to the press and expressed his appreciation for Hungary’s family policy and the preservation of nature while admitting the topic of migration wasn’t discussed at all. He also clarified that the brevity of his visit to Budapest was only due to logistical reasons, dispelling any doubts about whether it was political signaling.

During the second half of the press conference he spoke about the EU as “dreamed of by Schuman, Adenauer, De Gasperi” and that some interests “try to use the EU for ideological colonization and this is not good.” These statements, much to the press’s chagrin, are very close to statements made by Orbán which so often provoke the ire of Europe’s political elite.

If there was one mention of migration, it was through Orbán’s gift to the Pope, a copy of a 1243 letter from Hungarian King Bela IV to Pope Innocent IV. In this letter, King Bela IV wrote to the Pope that he would strengthen fortifications along the Danube River in Hungary in preparation for a Mongol invasion. Bela IV, a member of the Arpad dynasty which brought Christianity to the Hungarians, does not represent a rebellious counterpoint to the papacy.

St. Stephen I,the first Christian king of the Arpad dynasty, received  Hungary’s Holy Crown from Pope Silvester II and offered the country to the Virgin Mary, and through this pledged Hungary to a political and cultural alliance to the West.

Bela’s message to Pope Innocent was one of serious fraternal concern (a concern that was proved valid when the Mongols reached as far as Germany while ravaging Hungary to the point of extinction). It represents an acknowledgement that both Hungary and Rome are of the same world and serve the same purpose, although in different positions. After the devastating invasion, it was King Bela who rebuilt the country and earned the title of “second founder of Hungary.” It is no coincidence that his statue was behind the great altar of the Eucharistic Congress where Pope Francis celebrated Mass.

In these uncertain times such alliances can offer real protection against the new forms of invasions that Pope Francis spoke about. The Eucharistic Congress of Budapest did not only give hope to Catholics but to everyone who wants Europe to be what it has always been: a continent not just defined by curiosity, innovation, and openness, but also of pilgrimage, procession and prayer.

How Will the Vatican Enforce the A...