What’s behind a false rumor about Pope Francis resigning ‘in the next few hours’? 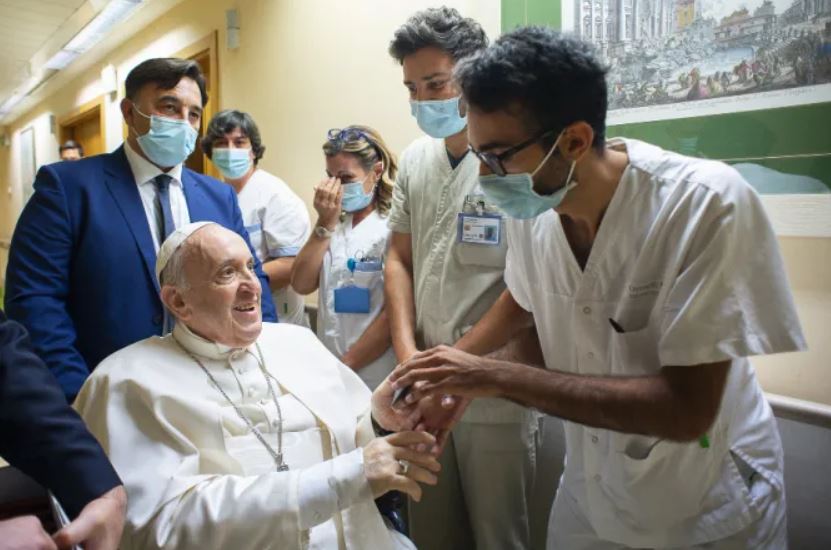 What’s behind a false rumor about Pope Francis resigning ‘in the next few hours’?

Rumors started to fly around social media Monday claiming that Pope Francis was “likely” to resign from the papacy “in the next few hours.”

The pope is currently hospitalized after undergoing a surgery July 4 to remove part of his colon, fueling reports that health reasons could have prompted Francis to take this step.

In fact, there is no sign that Pope Francis intends to resign soon. And the confusing reports are probably explained by a mistranslation of Italian into English.

In the post, the website’s editors commented on a video showing Pope Francis being pushed in a wheelchair in Rome’s Gemelli Hospital on Sunday, July 11, as he greeted medical workers and patients.

Some social media commentators quoted an out-of-context and poor English translation of the last sentence of the article.

The final sentence of the post, which was published at 9:22 a.m. Rome time, said, “meanwhile, rumors are coming from Gemelli about the likely discharge of the Pope in the next few hours.”

The Italian sentence used the word “dimissione,” which in context meant “discharge” or “release” from hospital.

The confusing part is that the same Italian word can also be translated to mean “resignation” in English.

Online A.I. translators like Google Translate do not have context for translations and are likely to give the most frequently or commonly used meaning of a word. Thus translating “dimissione” as “resignation.”

On July 5, the Vatican spokesman said that, barring unexpected complications, Pope Francis was expected to spend around seven days in hospital following his surgery, which would make his release to return home on Monday, July 12, a plausible rumor.

But shortly after noon Rome time, and a few hours after the Il Sismografo article was posted, Matteo Bruni said that the pope would be spending “a few more days” in hospital to continue his recovery.

There are several signs that Pope Francis is probably not thinking about resigning, not only in the coming hours, but in the coming days and months.

On Sunday, he was well enough to give his regular Angelus address from a balcony on the 10th floor of Gemelli Hospital, and though he spoke for a little less time than usual, he was able to stand, smile, and wave at the people gathered below.

Francis is also planning several trips in the coming months: first to Hungary and Slovakia in September and then Scotland in November.

While it is unlikely a papal resignation is imminent, that does not mean it is not possible in the future.

Pope Francis has before hinted at the possibility that he might resign, saying in 2015 that the Catholic Church should not have “leaders for life,” and noting in 2014 that Pope Benedict XVI’s 2013 resignation “cleared a path” for future papal resignations.

In a homily during one of his morning Masses in 2018, he asked Catholics to pray for priests, bishops, and the pope, who he said, must learn to leave their posts when it becomes necessary.

Francis noted that St. Paul, who was “compelled by the Holy Spirit” to leave Ephesus and journey to Jerusalem, “shows us the pathway for every bishop when it’s time to take his leave and step down.”

“When I read this, I think about myself,” Pope Francis said, “because I am a bishop and I must take my leave and step down.”

Christ the Redeemer Appears in Bea...