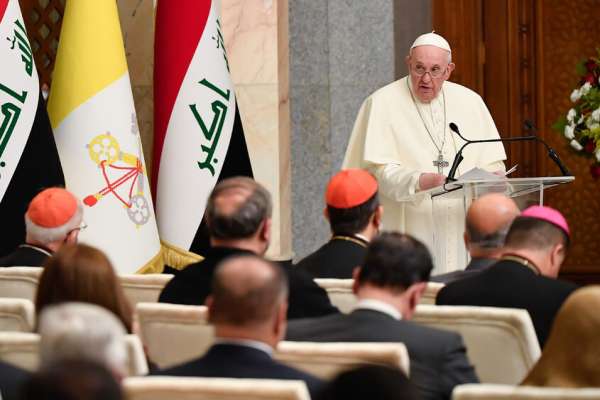 Washington D.C., Mar 5, 2021 / 02:00 pm (CNA).- Pope Francis’ visit to Iraq is hoped to bring a “reset” for the country, said one U.S. religious freedom advocate who has visited the region multiple times in recent years.

“Iraq cannot continue the way that it is, and see good outcomes. So there has to be some adjustments,” said Nadine Maenza, a commissioner at the U.S. Commission on International Religious Freedom (USCIRF), in an interview with CNA on Friday.

“I’m hoping that the light being shown on Iraq, and on Christians in particular, by the pope coming—it’s such a beautiful moment of just saying these people have value, they belong in Iraq, we all need to figure out how we can build a better Iraq together—I just hope it does have a restart for the country,” she said.

Maenza has traveled to the region multiple times in the last two years, including a visit to Sinjar, home to the Yazidi religious minority, as well as Erbil, in Iraqi Kurdistan, where many Christians fled from ISIS in 2014.

She spoke to CNA at the outset of Pope Francis’ visit to Iraq, the first-ever visit of a pope to the country. From March 5-8, Pope Francis will meet with the country’s political and religious leaders, hoping to encourage the local church and foster interreligious dialogue.

The pope addressed the Catholics at the Syriac Catholic Cathedral of Our Lady of Salvation, where 48 people were martyred during a 2010 terrorist attack.

Christians in Iraq have been devastated by the U.S. invasion in 2003, the resulting sectarian violence, and the rise of ISIS in 2014. Their population has been steadily dwindling for decades, from around 1.5 million in 2003 to around 250,000 Christians in the country.

However, when ISIS swept across the region in 2014, many Christians fled into neighboring Iraqi Kurdistan, taking refuge in and around the city of Erbil.

Maenza told CNA that Iraqi Christians are currently suffering from two chief problems: a lack of security and a lack of economic opportunity. She hoped Pope Francis’ visit would draw attention to these matters and help produce a solution.

Christians and Yazidis want to be involved in the decision-making about the future of the country, but they have not been given a seat at that table, she said.

“These people feel powerless,” Maenza said, noting their frustration that they don’t have a say in economic or security policy.

Iraq has resources, including the fifth largest oil reserves in the world, but the country is not able to even provide consistent electricity or water to its citizens, much less a sufficient number of jobs, she said.

After ISIS was defeated, many Christians in the country’s north have been unwilling or unable to return to their liberated towns on the Nineveh Plain or in Mosul. They still have serious security concerns, Maenza explained.

A number of militia units of the Popular Mobilization Forces (PMF), as well as the country’s security forces, the Kurdish Peshmerga, and Christian militias, are all active in the region, she said, yet many of their members do not hail from the local towns they occupy.

Maenza compared the situation to the “Wild West,” where any citizen traveling through the security checkpoints is subjected to a shakedown. Thus, many Christians who fled ISIS but who remain in Iraq have not yet returned to their homes because they don’t feel safe with the presence of the militias and security forces.

Christians need to be reminded that they are a part of Iraq’s future—which will hopefully be a fruit of Pope Francis’ trip, she said. “Diversity is a good thing,” Maenza said of the Sunni and Shia Muslims and the number of ethno-religious minorities that make up Iraq’s population.

Pope Francis on Friday used the metaphor of a complex carpet to describe the different Christian churches in the country.

“The different Churches present in Iraq, each with its age-old historical, liturgical and spiritual patrimony, are like so many individual coloured threads that, woven together, make up a single beautiful carpet, one that displays not only our fraternity but points also to its source,” the pope said.

“For God himself is the artist who imagined this carpet, patiently wove it and carefully mends it, desiring us ever to remain closely knit as his sons and daughters.”

The meeting is significant, Maenza explained, and hoped that the pope could successfully push for Shiite militias on the Nineveh plain to stand off so that local Christians can safely return to their homes and live peacefully.

“That kind of conversation is a good thing,” she said.

The True Story of a Catholic Chapl...