Why did Pope Francis visit a record store in Rome? 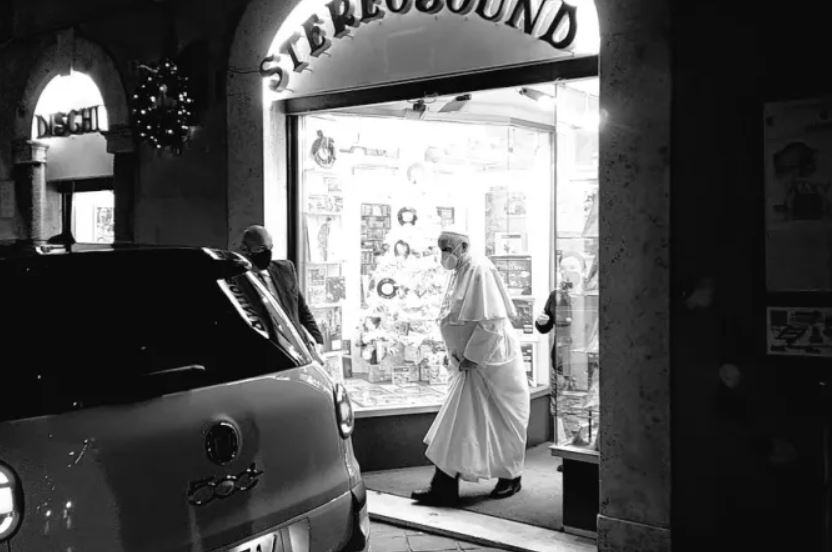 Why did Pope Francis visit a record store in Rome?

A photo showing Pope Francis exiting a record store gained traction on social media Tuesday as people asked the question: What did the pontiff purchase?

Javier Martínez-Brocal, director of international news agency Rome Reports, tweeted the black-and-white photo reminiscent of an album cover along with a caption in Spanish that translates to read, “The Pope, in a record store in Rome.”

The photo shows the masked pontiff leaving a store with a sign reading “Stereosound” above the door. Another nearby sign reads “dischi” or “discs.” Inside the store window, the photo reveals a Christmas tree decorated with records as ornaments.

According to La Stampa, Pope Francis visited the newly-renovated store to bless it. During his 12 minutes inside the shop near the Pantheon, he received a disc of classical music from the shopkeepers. The paper reported that the owner, named Letizia, together with her daughter and son-in-law, are old friends with the pontiff, who was a customer long before he became pope. He promised to return one day and visit them as pope, according to the report. On Tuesday, he appeared to do just that.

Familigia Cristiana reported the owner as saying: “He already came when he was a cardinal. It was very emotional. We gave him a classical music record as a gift.”

According to CNN’s Delia Gallagher, a Vatican spokesperson confirmed that Pope Francis blessed the shop.

In addition to the photo, Martínez-Brocal also shared a 24-second video of Pope Francis’ departure, as he exits the store and climbs into a white Fiat 500L.

In 2016, Aleteia reported that the pope enjoys classical music including from composers Mozart, Bach, and Beethoven.