Why France is losing one religious building every two weeks 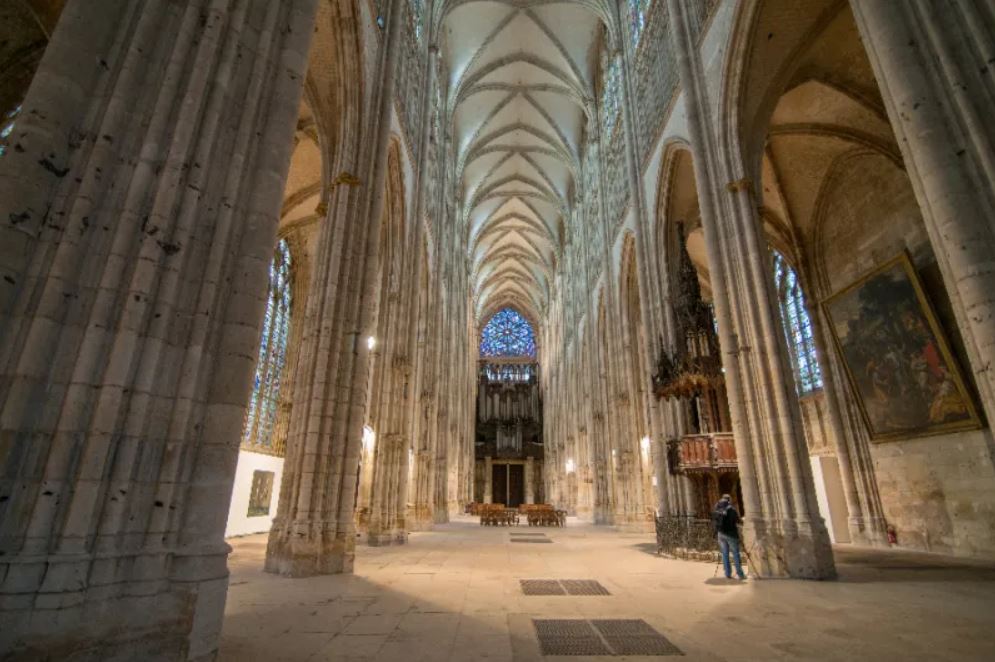 Why France is losing one religious building every two weeks

The nave of Saint-Ouen Abbey in Rouen, Normandy, France. / Jorge Láscar via Wikimedia (CC BY 2.0).

One religious building is disappearing in France every two weeks.

That is the conclusion of Edouard de Lamaze, president of the Observatoire du patrimoine religieux (Observatory of Religious Heritage) in Paris.

He is raising the alarm in the French media about the gradual disappearance of religious edifices in a country known as the “eldest daughter of the Church” because the Frankish King Clovis I embraced Catholicism in 496.

Lamaze’s appeal for increased awareness came after a fire destroyed the 16th-century Church of Saint-Pierre in Romilly-la-Puthenaye, Normandy, northern France. The fire, deemed accidental, took place on April 15, exactly two years after the blaze that devastated Notre-Dame Cathedral in Paris.

The unforgettable image of the burning cathedral, which circled the planet in 2019, pointed to a deeper issue within French society: serious shortcomings in the preservation system of religious monuments, coupled with increasing hostility toward religion.

Lamaze told CNA in an interview that in addition to one religious building disappearing every two weeks — by demolition, transformation, destruction by fire, or collapse — two-thirds of fires in religious buildings are due to arson.

While these statistics include buildings belonging to all religious groups, most of them concern Catholic monuments, which still represent a large majority in France, where there are roughly 45,000 Catholic places of worship.

“Although Catholic monuments are still ahead, one mosque is erected every 15 days in France, while one Christian building is destroyed at the same pace,” Lamaze said. “It creates a tipping point on the territory that should be taken into account.”

Lamaze believes that on average more than two Christian monuments are targeted every day. Two-thirds of these incidents concern theft, while the remaining third involve desecration.

According to the most recent figures from France’s central criminal intelligence unit, 877 attacks on Catholic places of worship were recorded across the country in 2018 alone.

“These figures have increased fivefold in only 10 years,” Lamaze said, noting that 129 churches were vandalized in 2008.

“At the beginning of the 1970s, writer and journalist Michel de Saint Pierre published a book entitled églises en ruine, Eglise en péril [“Churches in ruin, endangered Church”], in which he already sounded the alarm. But the situation has heightened tenfold, or even hundredfold, since then.”

Currently, 5,000 Catholic buildings are potentially in danger of disappearing.

Apart from the growing hostility to which they are subject, these religious sites are also suffering from deep negligence on the part of public authorities.

This state of affairs is partly explained by the fact that, by virtue of the 1905 law on the Separation of the Churches and the State, municipalities became the owners of France’s religious buildings. In many cases, they have been unable to meet the costs of maintaining the sites.

“These buildings have not been maintained for over a century, and they have never been subject to restoration work or protection measures against theft or fire,” Lamaze said.

He explained that only 15,000 Catholic sites are officially protected as historical monuments, while the other 30,000 buildings are practically left to decay.

Lamaze argues that another significant and emblematic example of the mismanagement of this heritage is Saint-Ouen Abbey, a jewel of Gothic architecture belonging to the city of Rouen in Normandy.

“This abbey church is endowed with a ‘forêt’ [the church’s distinctive style of roofing] that is even bigger than that of Notre-Dame. It is a pure marvel and yet there is no alarm system of any kind.”

“It is another candidate for destruction. It is enough to make you cry!”

He continued: “Fires are also sharply increasing because buildings are more and more dilapidated, and this negligence also attracts a lot of thefts of paintings, statues, or gold chalices…”

Although French cathedrals benefit from a special status and are owned by the state, they have not been spared in the wave of fires that have hit Catholic sites in recent years. The blaze at Notre-Dame de Paris in 2019 was preceded by a fire at the Cathedral Saint-Alain of Lavaur in Tarn, southern France, and followed by fires at the cathedrals of Rennes and Nantes in 2020.

“The current minister of culture is seeking to establish a protection charter, but the situation is extremely serious and, alas, I don’t see any real awareness growing, nor any sense of responsibility in the face of this crucial challenge for our national heritage,” Lamaze said.

“In fact, beyond the religious aspect, it is our country’s culture that is at stake here, as these jewels of art and architecture are an integral part of the spirit and greatness of France. And if we keep going like this, one day our heritage will be completely destroyed. We will lose everything.”