Why I Love the Extraordinary Form of the Mass 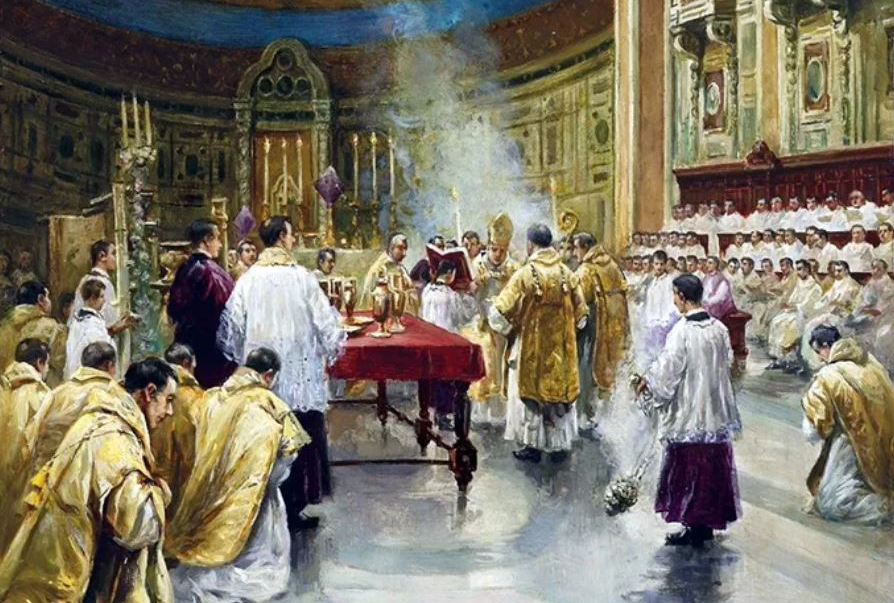 Why I Love the Extraordinary Form of the Mass

“The People of God need to see priests and deacons behave in a way that is full of reverence and dignity, in order to help them to penetrate invisible things without unnecessary words or explanations.” —Pope St. John Paul II

“What earlier generations held as sacred, remains sacred and great for us too, and cannot be all of a sudden entirely forbidden or even considered harmful. It behooves all of us to preserve the riches which have developed in the Church’s faith and prayer, and to give them their proper place.” —Pope Benedict XVI (regarding the Extraordinary Form of the Mass)

I confess. I am passionately orthodox and traditionally minded, and I’m tired of hiding it. I’m crawling out of my hideous little liturgical cave — just watch me. Just mention the words, “the universal tongue,” and I’m off sailing into the supernal skies, hunting for the closest Latin Mass, even if I have to call a helicopter ambulance so I can get there before the Gospel reading so I can receive Holy Communion most reverentially at the Communion rail. Just whip a golden-frilled chapel veil my way, and I’ll swoon miserably. Show me a holy card of an eternal priest of Jesus Christ raising the sacred chalice to the heavens, facing ad orientem, and I’ll need natural blood pressure supplement ASAP. Seriously!

The Latin Mass knocks my soul’s socks off. Why? Well, now I know. For a decade, I’ve treasured the Latin Mass, but more recently, I’ve come to actual moral convictions about its redeeming place in the Church. It is re-surging with a wondrous energy and vivacity. In the 1980s, there were fewer than 10 locations in the United States where one could find a Latin Mass offered by a priest in good standing with Rome each Sunday. Now in 2017, there are reportedly more than 400 such places. In a recent article I wrote for the Dakota Catholic Action, I included a personal testimony of my journey:

“Having just joined the Church, I was still learning basic Catholic teachings, getting the hang of praying the Rosary and starting to change my life for the better. I definitely wasn’t overly familiar with Ecclesiastical Latin, and if you mentioned that a priest wore a ‘cassock’ to me, I’d probably wonder why you were talking to me about his footwear.

“On a practical level, as I sat through the Latin Mass, I didn’t understand what was going on. I was just a broken, searching  young person looking for a little peace and guidance in life, and yet, I instinctively knew a few things for certain. I knew that when I was at the Latin Mass, I was on ‘sacred ground’; I was in touch with the lifeblood of God’s very heart.

“As I watched the priest offer the Sacrifice of the Mass ad orientem (‘to the east’), I knew that Christ was radiantly alive in the world today, just waiting to take the sorrows and sins of us poor pilgrims upon Himself. I also knew that this divine liturgy brought solace to my soul in a unique, overpowering way — such as I had never felt before. As I attended the Latin Mass over and over, I began to sense that it was like a clandestine jewel of Christ the King, tucked away in the bosom of the Church; it had the capacity to bring a glimpse of Heaven to even the most pitiful of souls. And I began to see that in some beautiful way, God deems us, His creatures, worthy to walk on this ‘sacred ground’; to attend this Mass so akin to the praise of the celestial angels.”

And, the truth is, I am surely not alone. Centuries of devout Catholic souls have cherished what we now call the Extraordinary Form of the Mass and, time and time again, found themselves fortified by its limpidity and inspired by its authenticity. At the height of a solemn High Mass, if you just keep your heart open, you will find yourself worshiping Almighty God with such purity — you will see that he is a God so omniscient and omnipotent that he is worthy of the same worship that centuries of saints have offered to him. As described on the website, latinmassmontana.org:

Like many devout Catholics, I’ve savored the Latin Mass from the moment I first encountered it, but now I have come to a point where I don’t just savor it, I believe in it. I believe it is like the fantastical wellspring of water that sprang out of the rock that Moses struck to feed God’s chosen people in the wilderness. I believe it is one of the ways that God is lending to rescue the Church at sea from battering winds of the culture of death. It makes a prodigious impression on the meek of the earth and it raises the brokenhearted to a place of healing. And I do believe it makes us free — free creatures that can worship God on high without an earthly care. It does not tie us down to the sensory demands that overly affective and cheaply emotional worship forms of worship tend to do. It pierces the soul with its ethereal radiance, and a genuine encounter with it will never be forgotten.

As Wyoming Catholic College professor Dr. Peter Kwasniewski writes in his book, Resurgent in the Midst of Crisis:

“This is the challenge that the traditional Roman liturgy makes to us again and again, in its prayers, its ceremonies, its calendar, and its ethos. It is not accommodated to our worldly compromises. … It proclaims unequivocally the primacy of things heavenly and spiritual. It is the luminous expression of an ageless tradition of worship, as carried out by men and women who made this worship their primary work in life. As such, it does the opposite of pandering to us moderns; it confronts us with our need for radical conversion. The old Missal is the unwavering,   undying repository of the radical message of Jesus Christ, our Lord and God. Are we ready to hear this Gospel and take up the Cross?”

Despite its seemingly radical edge, Pope Benedict’s motu proprio is ardently supported by some of the Church’s foremost liturgical experts.

Cardinal Robert Sarah, Prefect of the Congregation for Divine Worship and the Discipline of the Sacraments, is known to endorse both the Novus Ordo and the traditional Latin Mass. Last October, he notably, and with remarkable encouragement, addressed pilgrims who had traveled to Rome to celebrate Benedict XVI’s motu proprio Summorum Pontificum. Further, regarding the Extraordinary Form of the Mass, he once said, “Vatican II never asked us to reject the past and abandon the Mass of St. Pius V, which spawned many saints, nor discard Latin. But at the same time we must promote the liturgical reform sought by the Council itself.”

In 2001, Pope St. John Paul II, in an address to the plenary assembly of the Congregation for Divine Worship and the Discipline of the Sacraments, said:

“The People of God need to see priests and deacons behave in a way that is full of reverence and dignity, in order to help them to penetrate invisible things without unnecessary words or explanations. In the Roman Missal of Saint Pius V, as in several Eastern liturgies, there are very beautiful prayers through which the priest expresses the most profound sense of humility and reverence before the Sacred Mysteries: they reveal the very substance of the Liturgy.”

So, this being said, who’s on board?

5 Fascinating Facts About the Cruc...