Why Ireland Needs St. Patrick More Than Ever 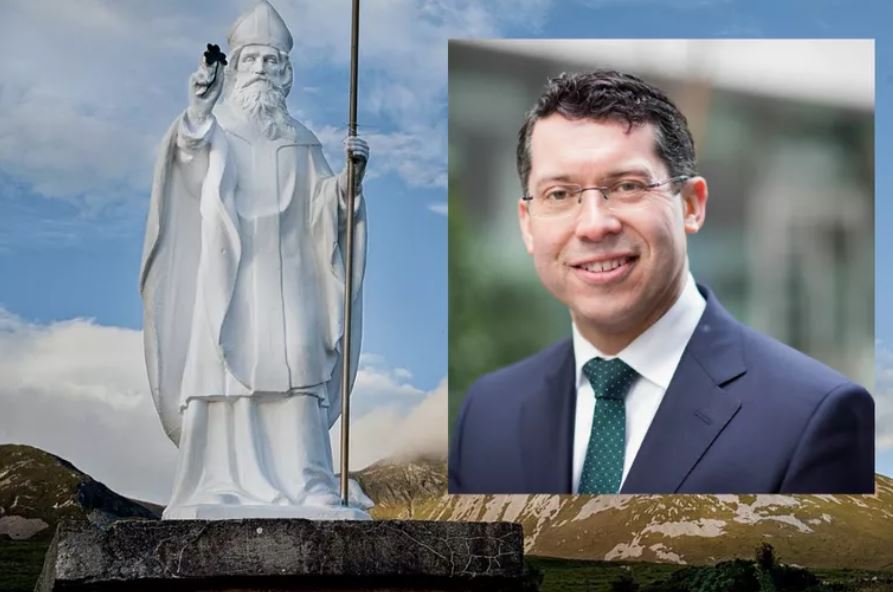 Why Ireland Needs St. Patrick More Than Ever

“Freedom of worship is severely curtailed, with police threatening priests who would be prepared to distribute Holy Communion. Throughout the pandemic, the Church leadership felt that it had no option but to go along with restrictions on public worship — despite Ireland’s strong constitutional protection of freedom of worship. In recent times, however, they have questioned the extent of these restrictions and have encouraged the faithful to lobby government politicians to let the churches open in time for the Easter ceremonies.”

Sen. Rónán Mullen was speaking to the Register March 9 from his office at the Irish Parliament in Dublin, from a country with one of the harshest lockdown regimes in all Europe.

Ireland, like everywhere else, continues to live through the COVID-19 crisis. Relatively speaking, the number of virus-related deaths has been lower there than in other countries; 80% of deaths have occurred in nursing homes. Mullen acknowledges that mistakes were made by the Irish government, not least in its failure “to get ahead of the curve” as the virulence of the virus became apparent to all. As he points out, vaccine rollout has been slower in Ireland than in neighboring Britain, or in Israel, a country of similar size to Ireland.

While acknowledging the need for the current lockdown, he describes the government’s approach as “hypercautious,” something he understands. “I have elderly parents myself,” he said. “But I do wonder if some of the measures are unjust and an overreaction.” He also thinks that the current Irish government directives are at times guilty of giving “mixed messages” to the public, not least when it comes to the subject of public worship and the ease with which government ministers have dismissed any attempts for pragmatism on that subject. “The authorities are just not aware of the need for public worship,” Mullen concludes, an attitude he finds troubling.

Mullen represents the National University of Ireland constituency in Seanad Éireann, Ireland’s Upper House of Parliament. First elected in 2007, Mullen has been reelected three times, most recently in 2020. As an independent politician and chairperson of the Human Dignity Alliance, he advocates for a human dignity perspective in policy and lawmaking. In his parliamentary contributions to date, he has emphasized issues such as the right to life; protections for the victims of human trafficking; support for improved palliative care in hospitals; support for those with special needs; maintaining Ireland’s commitment to Overseas Development Aid; and social welfare protection for those deemed economically vulnerable.

Mullen established the Human Dignity Award in 2014. It is presented annually to a person or group whose commitment to the promotion of human dignity has been exemplary.

Mullen was born and still lives in Ahascragh, County Galway. He took a B.A. in English and French in The National University of Ireland Galway and a master’s degree at Dublin City University. Later, he completed studies at the Honorable Society of King’s Inns in Dublin, thereafter practicing as a barrister in the Irish courts. In addition, he has lectured in law and communications at Dublin’s Institute of Technology. He also worked as communications officer and spokesperson for the Archdiocese of Dublin from 1996 to 2001. He has written weekly newspaper columns for the Irish Examiner and Irish Daily Mail.

His perspective enables him to weigh in on the current cultural climate in Ireland.

The current pressure on the health service is made worse by the need to continue to meet the new abortion regime, officially sanctioned since 2019 following the 2018 abortion referendum, which for the first time allowed unfettered abortion access within the Irish Republic.

“It’s a very sad situation,” says Mullen, “to go from a constitutional safeguard for the unborn [this was removed as a consequence of the 2018 referendum] and a health service that provided high-quality maternity care, with low numbers of women traveling to Britain for abortions to the present reality. Since 2019 — the first year in which the abortion referendum result was implemented — we have witnessed a loss of value and respect for life in the womb, with 6,666 abortions performed in Ireland in that first year alone. Using the figures for the numbers who traveled to Britain for the purpose of abortion prior to the referendum, that’s around a 75% increase in abortions.” Since the referendum, Mullen senses a “normalization of abortion” in political discourse in general, and in the Irish media in particular, so much so that “no other narrative is ever allowed to say that abortion is a bad thing.”

Undoubtedly, Irish society shifted in a new direction with the legalization of abortion following the 2018 abortion referendum. That result, and the earlier 2016 referendum on marriage, killed off any lingering idea that Ireland’s historic Catholicism dominated the social and political discourse of the nation. Yet Mullen belongs to a small minority of Irish politicians who still hold to traditional moral positions on the sanctity of life and the view that marriage is solely between a man and woman — positions increasingly unwelcome in the Irish public square. “People will silence you,” he says, thinking of the current mania for the so-called “cancel culture” around unpopular opinions. “If they don’t care about your freedom of speech, before too long these same people will decide you must be prevented from voting, too.”

As the St. Patrick’s Day national holiday approaches, Mullen reflects on this emerging reality in a country that once claimed to be “The Land of Saints and Scholars.” On March 17, more than at any other time of the year, Irish Americans recall the land from which their ancestors hailed. Few Americans, Mullen thinks, are aware of the reality, however, of the “new Ireland” emerging. The Irish Diaspora breaks down, he feels, into two groups: those no more conscious of the radical shifts in Irish society than they are of similar movements in American society and then those who are as concerned about the direction being taken by Irish society as they are about that of the United States.

With a heavy heart Mullen tells of an Irish American friend who used to be a frequent visitor from the States to Ireland and a lover of all things Irish but who has chosen not to fly his Irish flag on St. Patrick Day following the abortion referendum result of 2018. Mullen understands this. The country emerging now, however, spurs him on to fight for a radically different vision of Ireland.

Mullen and his few political allies on these moral issues appear to be voices crying in the Irish political wilderness and, at times, also crying into a vacuum. The reason for this is that the Irish mainstream media is dominated by a liberal “progressive” secular agenda. Mullen identifies a “herd mentality” in certain politicians and throughout most sections of the Irish media. It is one he describes simply as “aggressively secular and hostile to Christian values.” While acknowledging the disastrous legacy of past Church failures, Mullen maintains that this secular “hostility” is “born of indifference, ignorance and a market-driven ‘wokeism.’”  He observes a similar phenomenon abroad in what he terms an “international closing down of diversity”. He feels, however, that this phenomenon is more prevalent in Irish society than in either the United States or the United Kingdom, due to the fact that there is little by way of an Irish conservative narrative — either political or social — to counter it.

Given this situation, one wonders what chance Mullen has to propagate a message other than that promoted by the current establishment. Part of any future battle, he believes, is for Christians and their allies of goodwill to enter the political fray. “People have been fed and internalized a worldview that ‘reactionary’ means going back to the previous situation. As a result, there is a ‘myth of progress’ in which people have been taught to leave their faith to one side, committing to a future without it. On this point, our opponents have been very successful. Yet, as we can see, in spite of this supposedly ‘progressive’ approach, the world continues to fail to overcome its problems. That is because these ideas of ‘progress’ fail to follow any overriding moral principles.”

Despite the political climate, Mullen’s Catholic faith is the cornerstone of his personal political philosophy. His inspirations include Catholic politicians such as the British peers Lord Alton and Baroness O’Loan. It is easy to see why. All three politicians have opted for unfashionable, and at times unpopular, positions that fly in the face of modish fashion but which point to beliefs and convictions that are perennial. He also cites the martyred Pakistani politician Shahbaz Bhatti as a model of how to witness to Christ in the world of politics.

“Faith is real or it isn’t, and if it’s real, then it must form part of what one is proposing as political ideas,” states Mullen.

Mullen still dreams of a different country emerging from the uncertainties of the current malaise. His vision is rooted in his Catholic faith — and by extension of the many who suffered down the centuries so that he could have that faith. His politics are, however, a calling to practical action today, to build a better society from the ruins of one shattered by a virus. And with this project, Mullen urges his fellow Irish of whatever background “to get involved, as there is a field to be tilled. Ireland needs to rediscover its Christian principles for its own sake and then determine what sort of society can be built from that; rather than one controlling a narrative, it could be a people searching for truth.”

“The cultural trendsetters of Ireland have turned St. Patrick into a kind of ‘green Santa Claus,’ a mere mascot for the ‘Paddy’s Day’ parade,” says Mullen. Yet he feels St. Patrick is “the ideal patron saint for those who work for a revival of committed Christian faith throughout this country.” Mullen points to the fact that St. Patrick heard the voice of the Irish who had enslaved him. Then, “with love in his heart, he returned to the ‘peripheries,’ as Pope Francis would say, of the known world. He went beyond the boundaries of the old Roman Empire to brave the terrors of a pagan land whose people needed the Gospel. The descendants of those people have the same need today. And like St. Patrick, we Irish Christians must hear the voice of our contemporaries who yearn to hear that human life has a meaning and purpose.”

Patrick: The saint who knew what i...

‘Everybody needs a little Jesus’:...