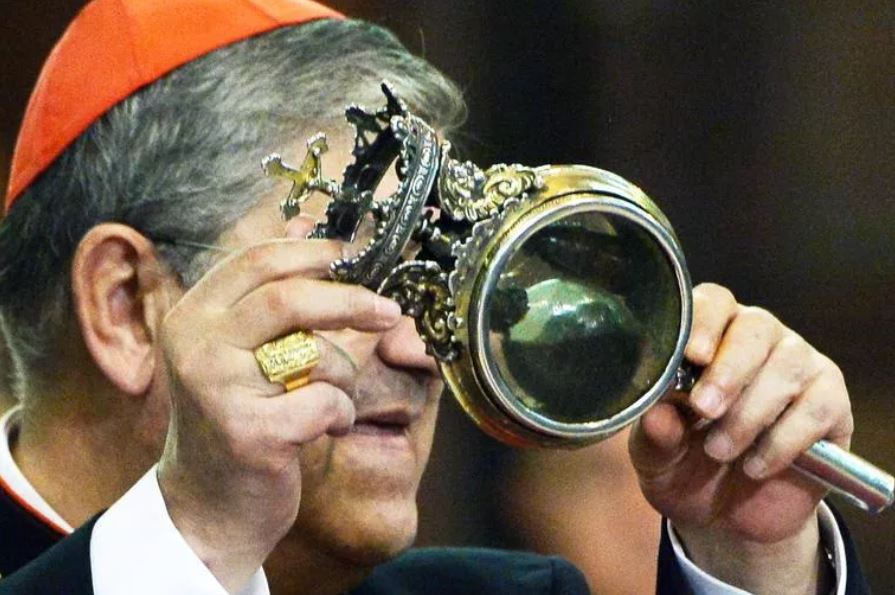 St. Januarius (San Gennaro) will have much attention on Sept. 19 when people in Naples, Italy, wait anxiously to see whether his blood will liquefy. At the same time, 4,000 miles away, the San Gennaro festivities are underway in New York City’s Little Italy.

Once again on Sept. 19, thousands of people will be waiting to see if the blood of fourth-century martyr St. Januarius will liquefy on his feast day, as it has done almost ceaselessly for hundreds of years.

People in Naples, where the saint’s body and head along with his blood have been kept for centuries, and those who come from other locales and countries, will eagerly go to the Cathedral of the Assumption of Mary, also known locally as Naples Cathedral, or sit by their radios and TVs, to see and hear if his blood liquefies on schedule. St. Januarius — or San Gennaro as he is also known — is a hometown saint and the principal patron saint of Naples.

At the same time, in New York City in the section known as Little Italy, crowds will attend the annual Feast of San Gennaro which was first celebrated 95 years ago —in September 1926 to be exact. Naturally, it was started by Italian immigrants, mostly Neapolitans who had immigrated from Naples. What began as a one-day celebration of their patron San Gennaro, weaving in their Italian traditions and culture, would eventually grow and expand to include large numbers of non-Italian New Yorkers and out-of-town visitors.

This Italian-American feast also expanded from that initial one-day event of a solemn celebration of their patron saint, along with a neighborhood party on Mulberry Street, to today’s 11-day Italian-American festival that began Thursday and runs through Sept. 26.

To celebrate San Gennaro it weaves some religious festivities together with continuous food fests, a parade, daily entertainment and vendors. The streets and atmosphere are filled with sausage-and-pepper sandwiches, eggplant, chicken parmesan, mozzarella sticks, calzone, fried dough,cannoli, zeppole and more.

Naturally, the saint’s image became the central figure in a large solemn precession through the streets of Little Italy. His unofficial national shrine was, and remains, in Most Precious Blood Church, where the Italian populace has worshipped for more than a century. As was their custom, people would honor the saint and at the same time make an offering for the poor in the surrounding neighborhoods by pinning money to ribbons affixed to the garments of San Gennaro.

At one time more than 25 Catholic schools and religious organizations, and even a few secular groups, were recipients.

Although little is known about him, Januarius was the Bishop of Benevento, a city northeast of Naples. He hid Christians during the persecution of Diocletian, but he was himself caught, and in the year 305, he and his companions were thrown to the lions. The beasts refused to harm them. Then like Daniel’s companions, he was thrown into a furnace, but the fire had no effect. He came out unharmed. Finally, the proconsul, undoubtedly frustrated, had him beheaded.

After Sept. 19, another major annual liquefaction of his blood — turning from solid to liquid —occurs on the Saturday before the first Sunday of May in memory and celebration of the date his separated relics — body and head — finally arrived at Naples Cathedral.

It’s quite interesting that the last place for his relics before coming to the cathedral was in Monte Virgine, an abbey in the province of Naples that is purported to contain relics (brought from Jerusalem by Emperor Frederick II) of the bodies of Shadrach, Meshach, and Abednego. These were Daniel’s companions, who were also saved from the fiery furnace (Daniel 3:16-97) as Januarius would be.

The third major time the blood of St. Januarius-San Gennaro liquefies is Dec. 16.  This date marks the anniversary of his intercession that saved Naples from sure destruction in 1631 when nearby Mount Vesuvius was about to erupt. People implored his help to save the city, and Naples was spared from what loomed as sure tragedy. The following year, on Dec. 16, 1632, for the first time on this date, San Januarius’s blood liquefied, and has continued ever since, in commemoration of that event.

No reason to wonder why for centuries on these three days the Neapolitans, civil as well as religious, annually celebrate and honor him as the patron of the city. They pray for San Gennaro’s protection from Mount Vesuvius and from other potential disasters, including fires and plagues.

The prayers continued when the Neapolitans came to America and settled in Manhattan’s Little Italy. As the website of the Shrine Church of the Most Precious Blood, built in 1905 and now a sister church with the Basilica of St. Patrick’s Old Cathedral a few blocks away, states:

“Neapolitan Italian immigrants considered San Gennaro their protector in America. They called upon him — as they had in Italy — to protect them from natural disasters, fire, misfortune and illnesses. In America, where Italian immigrants faced new difficulties, they turned to San Gennaro for intercession to protect them from childhood diseases, polio, influenza, and tuberculosis, which were common in their poor neighborhoods.”

As in New York, Naples also celebrates with a procession through the streets in the center of Naples. But, of course, they will have the actual relics of San Gennaro. The silver bust of the saint, the reliquary containing his head, is placed near the altar. The archbishop, the abbot of the Chapel of St. Januarius in the cathedral or another priest will take the hermetically-sealed bulbous glass vessel stored in a safe place in the cathedral and show it to everyone. The blood begins to liquefy when it is near the head of the saint. There are prayers before the liquefaction and celebration as the people approach and kiss the vessel containing San Gennaro’s liquefied blood.

All the archbishops of Naples have attested to this phenomenon, as have a long line of secular officials who join in the affirmation because the exposition uniquely requires that both civil and church authorities must be present. Both Church and civil officials have to agree on the result. It’s no wonder that the feast of St. Januarius is an official public holiday in Naples.

This year’s Feast of San Gennaro returns after being canceled last year because of the COVID-19 situation.

Father Brian Graebe, the pastor of the Basilica of Old St. Patrick’s Cathedral, will be the celebrant of the 2pm Mass, which kicks off the 11-day feast, on Sunday at Most Precious Blood Church on Baxter Street.

“Immediately following is the famous procession along the streets,” he said. Naturally, being a religious procession, the life-sized bust of St. Januarius sculpted in silver and brass will draw huge attention. It was given as a gift from the people of Naples on Sept 19, 1946, at the end of World War II, as a “thank you” for the help of the United States during that time.

Other than last year’s health crisis, which interrupted the feast, the only other times it was not held were during the World War II years of 1942-45, then again in 2001 after Sept. 11.

For this 20th anniversary of 9/11, this year the feast of San Gennaro will be held in honor of all the First Responders and their families, and the Grand Marshal will be New York City Fire Commissioner Daniel Nigro.

While Little Italy’s Italian residents have decreased from an all-time high of 1.5 million people near mid-20th century to today’s less than 100 families as children married and moved to Brooklyn and other boroughs, the feast of San Gennaro continues. Although the tasty foods and pastries of Italia are always popular, the religious aspects remain strong. Father Graebe mentioned that Cardinal Timothy Dolan was in the area recently filming videos at the Church of the Most Precious Blood.

“It’s a very pretty church that would fit right in any side street in Naples,” Father Graebe said. He knows the city because he has visited the shrine of St. Januarius in the Naples Cathedral.

After the Church of the Most Precious Blood became part of the basilica’s family it is open only for Sunday Mass, but for the feast of San Gennaro will be open daily “during the festival so people can come and pray and light a candle,” the pastor said.

“We also have a group to come and do some evangelization. Priests are coming for confessions.” If weather permits during the last night of the festival, there will also be another procession.

As Father Graebe affirmed, during the festival, the plan and idea is to “keep focused on the faith as much as possible.” That is the highlight St. Januarius (San Gennaro) will certainly appreciate.

The King of Horror Movies and Cath...

Why the Satanic Temple Backs Big A...