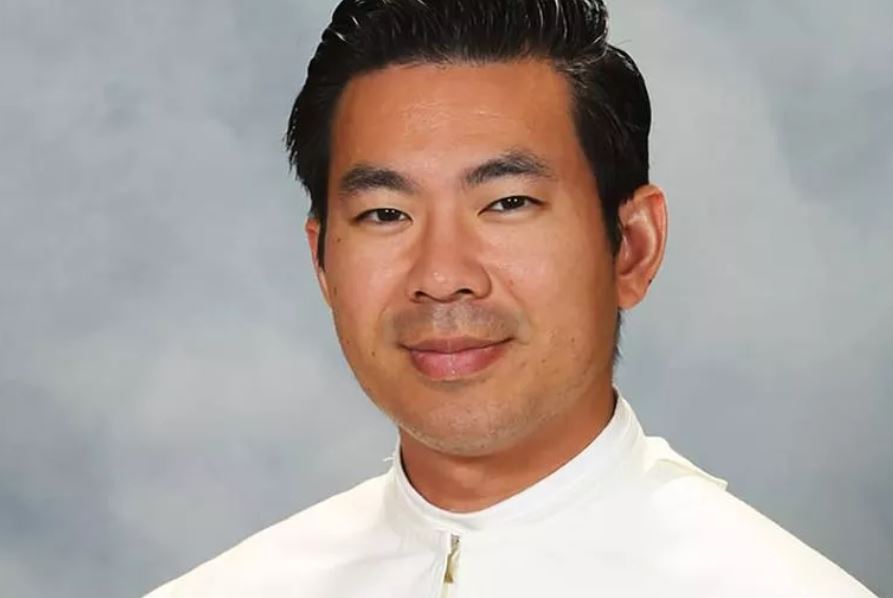 “As long as people think they can be happy by themselves, there is no hope for them,” says Norbertine Father Jacob Hsieh. “We must see that our only happiness is in the Blessed Trinity.”

Norbertine Father Jacob Hsieh is a priest of St. Michael’s Abbey in Southern California. A graduate of St. Thomas Aquinas College in Santa Paula, he was ordained a priest by Bishop Kevin Vann in 2015. Father was born in Dallas, Texas, to a Vietnamese mother and Taiwanese father. He attended Mary Immaculate Elementary School and Jesuit College Prep for high school before going on to TAC.

His work for the community includes teaching Latin to freshman and junior religion at Mary Star of the Sea High School in San Pedro, and chant at Ss. Peter and Paul Church in Wilmington, a parish of the Archdiocese of Los Angeles staffed by the Norbertine Fathers. He also leads the schola for parish’s Latin Mass.

In his priesthood, Father Jacob has immersed himself in the rich liturgical traditions of the Church and has a passion for sharing what he has learned with others. He recently spoke about his love of the traditional liturgy, the importance of Latin and on reviving Catholic education.

Why did you decide to enter the Norbertine community?

There was a Norbertine Chaplain at Thomas Aquinas College who introduced me to St. Michael’s Abbey. I visited the Abbey and was inspired by all of the young vocations there. The priests and seminarians were praying the Rosary and adoring the Eucharist every day together.

The solid formation of the Norbertines was also a big factor in my discernment. The Norbertines have as their main apostolate the beautiful celebration of the Divine Liturgy and the love of the Eucharist and Our Lady. These things drew me to them.

You have an interest in the Latin Tridentine liturgy. As this liturgy has not been widely used since 1969, and you appear to be well under age 50, how did you become introduced to it, and why do you find it appealing?

I actually did not like the Tridentine Mass for many years! It was initially cold and foreign to me. I was not used to the silence and constantly wanted to make responses. I loved the Latin Novus Ordo Mass. It was not until I served the Tridentine Mass and learned about this Mass from the inside that I began to see the grandeur and reverence and eternal Beauty of the Mass of the Ages.

Also, as a seminarian, I was able to serve as a subdeacon at Solemn High Masses. This was absolutely life-changing. I began to see that the Tridentine Mass was a window into the lives of the saints who assisted at these Masses.

For someone unfamiliar with the Latin liturgy, how would you recommend they start attending?

If someone is attending their first Tridentine Mass, they must approach this Mass with the greatest gratitude. Even though they do not understand the Latin and the intricacies of what is going on at the Mass, they must see that this is the Mass that shaped the world. This is the Mass around which all of the greatest churches in the world were built. This is the Mass wherein the saints received their spirituality and grace. We must see that what the New Mass has comes from the Old. We must approach this Mass with the greatest humility and gratitude, casting away all of our preconceptions and comforts. We must enter into the Divine Silence of the Mass and pray to God through the priest.

Then we must attend this Mass a couple of times. I suggest watching on YouTube “Why the Latin Mass is Bringing Young People Back to Mass” done by the fantastic channel “Joy of the Faith.” We have to give this Mass time to settle into our souls. After we get used to the silence and mystery of the Mass and being happy with not understanding everything, but praying to God from the depths of our heart through the priest, then we can get a Father Lasance Missal and begin learning about how to follow a Latin Mass. There are many good YouTubes for this. Learning about the Latin Mass is a beautiful challenge that will make everyone grow more than they ever could have imagined!

You teach Latin, a “dead” language. Why is it important for people to study Latin? Of what benefit will knowing Latin be to them?

When Latin is said to be a “dead” language, this does not mean that no one uses it anymore. This just means that it is frozen as it is and cannot morph. In English, new expressions and slang are constantly developing. In Latin, Caesar and Virgil will always remain the titanic classical works that they are. When we learn Latin, we enter into a whole different way of thinking. Latin is a window into philosophy and history and music and tells us the foundations of Western Civilization. Everyone studied Latin before.

Latin increases our clarity of thinking and our memory. It expands our mind. The power of expression in Latin is magnificent. It is not based on word order. For example, the phrase “Santa Dei Genitrix” means Holy Mother of God. But in the Latin, “Dei” means “of God” and is placed between “Santa (Holy)” and “Genitrix (Mother)”. So in the Latin, God is inside of Mary. This, the mystery of the Incarnation, is painted with words. We can’t do this in English because English is based on word order, for the most part.

You are a teacher of religion. Every statistic in the Western church shows that the practice of the Catholic faith is in decline. Why do you think this is, and what can we do to reverse the situation?

We must turn from our sins and turn to Our Lady. We must develop the natural and supernatural virtues. We must form our minds after Truth. As long as people think they can be happy by themselves, there is no hope for them. We must see that our only happiness is in the Blessed Trinity. We must have good catechesis and beautiful liturgy, a deep prayer life and devotion to Mary. We must preach the message of Fatima to all the world. We must repent and pray the Rosary. We must make reparation for our sins against the Immaculate Heart of Mary. Only Our Lady can triumph over this world.

What is the best way for parents to teach their children the Faith?

Parents must teach their children the Baltimore Catechism. They have to teach them how to pray the Rosary. They have to pray as a family and pray from their hearts every day together. Fathers must bless their children from their hearts. Fathers must lead their families to Church and mental prayer. Mothers must keep the fathers accountable in their prayer life and they must practice mental prayer for 15 minutes at least every day. If a couple does not know what mental prayer is, they must read St. Francis de Sales book, Introduction to the Devout Life.

I love playing the harpsichord and organ. I play the flute. My main love is the piano, though. I love art and architecture. I love learning about the history of the Church and how God’s Providence shines in her history.