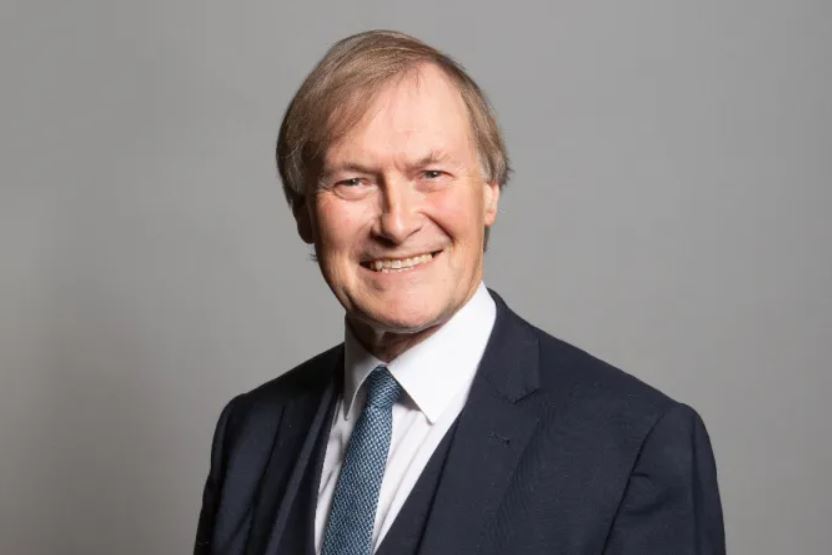 Speaking in the House of Lords on Oct. 18, David Alton said that his 40-year friendship with the Conservative Member of Parliament was rooted in a shared background.

“We both had our working-class origins in the East End of London — and, within a year of one another, were baptized in the same church by the same Franciscan priest — he often joked that there must have been something in the holy water,” recalled Alton, an independent member of the upper house of the U.K. Parliament.

“My Lords, His faith was in his DNA and animated his belief in public service and in the principle of duty.”

Amess, who served as a MP for 38 years, was stabbed to death on Oct. 15 at Belfairs Methodist Church in Leigh-on-Sea, Essex, during a weekly meeting with constituents.

Police arrested a 25-year-old man at the scene on suspicion of murder. The BBC reported that the suspect, currently being held at a London police station under the Terrorism Act 2000, is Ali Harbi Ali, a British national of Somali descent.

The BBC said that the suspect was previously referred to the Prevent scheme, which seeks to stop radicalization.

Amess, a Catholic father of five, is credited with helping to halt plans to downgrade the British embassy to the Holy See and playing a crucial role in organizing Benedict XVI’s historic visit to the U.K. Parliament in 2010.

Alton, a veteran human rights campaigner, noted that Amess was a firm supporter of the pro-life cause.

He said: “His faith informed his passionate commitment to the very right to life, to human dignity and to the common good. But it was also rooted in his absolute conviction that an MP’s first priority was to their constituents — it was the death of a constituent from hypothermia which led to his successful private member’s bill on fuel poverty.”

Alton, who together with Amess welcomed Mother Teresa to the U.K. Parliament in 1988, said it would be a “terrible mistake” to respond to the lawmaker’s murder by placing more barriers between MPs and their constituents.

“We will want to understand the killer’s motivations; to delve deeper into the failure of the Prevent program; to understand the radicalization which takes place in our prisons and also through the promotion of intolerant, toxic, and violent ideologies, sometimes with the indulgence of social media,” he said.

“Our thoughts today should also be with every family in this country, far too many of whom have lost loved ones to knife crime.”

Referring to a statement issued by the late MP’s family, Alton added: “People of faith — from all the great religions — and people of no faith must work much harder to create a more respectful society which honors difference.”

“Too often we have been in denial about the sources of the hateful threats to the foundation of a liberal, open, pluralistic society.”

“As David’s horrific death demonstrates, notwithstanding all the good in the world we still have the capacity to do truly evil things.”

Boris Johnson, the first baptized Catholic to become the British prime minister, said on Oct. 18 that politics needed people like Sir David, who was “dedicated, passionate, firm in his beliefs but never anything less than respectful for those who thought differently.”

Keir Starmer, the leader of the opposition Labour Party, said: “In the last few days, there have been many tributes to Sir David, from politicians of all parties, from his constituents and members of the public, from friends and from family, and from faith leaders, especially the Catholic Church, of which he was such a devoted follower.”

“Each tribute paints its own picture — of a committed public servant, of kindness, and of a man whose decency touched everybody that he met. Taken together, these tributes are a powerful testimony to the respect, the affection, and, yes, the love that David was held in across politics and across different communities. Together, they speak volumes about the man that he was and the loss that we grieve.”

Mike Kane, a Catholic Labour MP, suggested that the House of Commons should pass an “Amess amendment,” guaranteeing priests access to administer the last rites. He was referring to the outcry after a priest was turned away from the crime scene by police.

He said: “He did not die a martyr, but he died, as has been said, doing the things he loved and helping constituents. He would have known that the theologian Karl Rahner said that power is a gift from God. That portcullis on the top of our letterheads gives us all that power, whether on the Front Bench, in opposition or on the Back Benches. Let us recommit to Sir David today that we will use that power for the common good.”

“He died on the feast of St Teresa of Ávila. She said this, famously: ‘May you trust God that you are exactly where you are meant to be. May you not forget the infinite possibilities that are born of faith. May you use those gifts that you have received, and pass on the love that has been given to you.’”

“David used those gifts, and he passed on that love.”

He concluded: “Sir David, may the choirs of angels come to greet you. May they lead you to paradise. May the Lord enfold you in his mercy. May he grant you eternal life. Eternal rest give to him, O Lord, and let perpetual light shine upon him. May his soul and the souls of all the faithful departed, through the mercy of God, rest in peace.”

Sir Bill Cash, a Catholic who has served as a Conservative MP since 1984, noted that he and Amess had led parallel political lives.

Writing for the Catholic Herald, he said that “Catholicism meant everything” to Amess.

“Writing to the Herald recently in relation to his most recent book, he said: ‘My Catholic faith has sustained me through my period as a Member of Parliament, guiding me in all aspects of my life. I have been a staunch advocate for animal welfare and a vocal supporter of the pro-life movement,’” Cash noted.

Other colleagues paid tribute to Amess on the day of his death.

The Catholic MP Sir Edward Leigh wrote on his Twitter account on Oct. 15 that he was “devastated at the cruel loss of my friend David with whom I entered Parliament together 38 years ago.”

Leigh, the chairman of the All-Party Parliamentary Group on the Holy See, founded by Amess in 2006, went on: “We stood shoulder to shoulder on many campaigns. He only wanted to serve kindly the people of Essex. He will be greatly missed.”

Lawmakers attended a service of remembrance for Sir David on Monday evening at St. Margaret’s Church, opposite the Houses of Parliament.

The Rev. Anthony Ball, the 12th-century Anglican church’s rector, said: “Here, in the Parliamentary Church, we come to mourn the untimely death of Sir David Amess MP, to pray for [his wife] Julia, their family, and all who feel his loss so keenly, to remember the kindness and commitment of a friend and colleague, and to console each other in our grief.”

“Here we acknowledge a shared sense of vulnerability even as we express the determination to maintain our public service. Here we seek God’s protection and the needful gifts of courage and strength for the days ahead.”

The Archbishop of Canterbury, Justin Welby, said at the service that Amess’ commitment to public life was “inspired by his strong personal faith,” the BBC reported.

“In this great tragedy there is a unanimous conviction amongst all who knew him that Sir David was of the best,” he said.

Also speaking at the service was Canon Pat Browne, the Parliamentary Roman Catholic Duty Priest since 2009.

The Irish Times noted that Browne officiated at Amess’ wedding in 1983 at Westminster Cathedral, the mother church of Catholics in England and Wales, and later baptized their children.

“Let us pray for the soul of David Amess, and for all who have died in the service of Parliament,” Browne said, introducing a series of prayers read by senior Anglican clergy.

Concluding the prayers, he said: “Let us pray for ourselves, that we may be given strength, courage, and protection in our public service.”

Ex-Anglican Bishop: As a Catholic,...