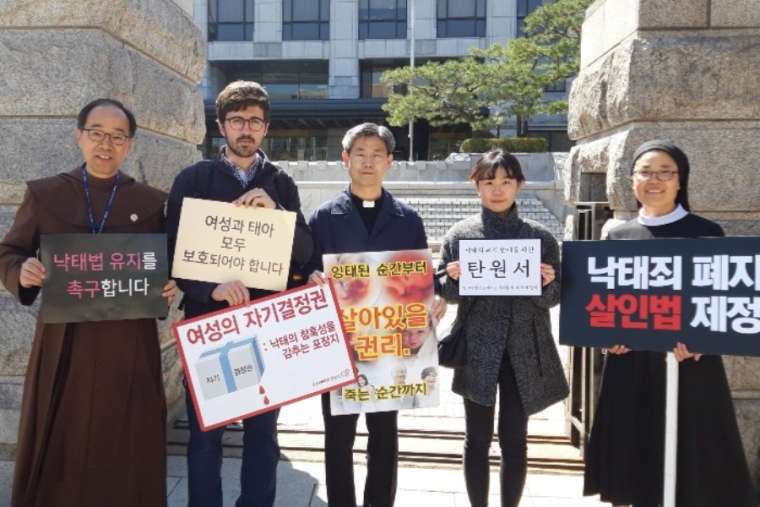 For more than 500 days a demonstrator has stood before South Korea’s government offices in a protest against the Constitutional Court’s decision to end the country’s abortion ban.

As the deadline approaches for South Korea’s National Assembly to revise the country’s abortion law, Korean Catholics are working to promote legislation that will address the needs of pregnant mothers.

Before the law prohibiting abortion except in the cases of rape, incest, genetic disease, or risk to the mother’s health was overturned in April last year, abortion was known to be common in South Korea and the criminal penalty rarely enforced. The Constitutional Court gave South Korea’s National Assembly until the end of 2020 to change the law.

Fr. Hugo Park Jung-woo, the secretary general of the Archdiocese of Seoul’s Committee for Life, told CNA Aug. 24 that he feared that the Ministry of Justice’s recommended revisions to the abortion law this month were paving the way for unregulated “abortion on demand.”

“The country has the duty to protect the life of all people,” he said. “We can raise our voices to make new laws or new policies to help women to choose delivery instead of abortion. That is our strategy.”

On Aug. 20 a delegation of eight Catholic bishops met with South Korean President Moon Jae-In at the Blue House, the president’s residence. During the meeting, Cardinal Andrew Yeom Soo-jung gave a letter to the president recommending pro-life policies.

The Archdiocese of Seoul’s Committee for Life is currently calling for the revised law to include mandatory counseling for women considering abortion, financial responsibility requirements for biological fathers, and the legal ability for mothers to deliver anonymously due to the cultural stigma surrounding unwed pregnancies in Korea, according to Park.

The justice minister promoting the pro-abortion legislation is a member of the president’s cabinet. South Korea’s president is Catholic, but has not taken a public stand on the abortion law.

The revision of Korea’s law to legalize abortion will also raise the issue of conscientious objection for medical workers for the first time, according to a recentjournal article. Without additional legislation, a doctor’s duty under Korea’s Medical Service Act will be reversed from a legal duty not to perform an abortion to a duty to perform an abortion.

South Korea’s Pro-Life Legal Association is promoting legislation that will recognize the right of conscientious objection, so that doctors and medical professionals in South Korea will not be forced to perform abortions.

“Korea’s current administration suggests a model of ‘inclusivity’ … but its policies only include as their subjects infants to the elderly. In the policies of a government that claims to guarantee support for all people in all stages of their lives, the unborn children, the start of life, are excluded,” Brother James Sang-Hyun Shin told CNA.

Shin is a doctor and religious brother with the Congregation of Kkottongnae, which provides medical care to the poor and leadership to South Korea’s pro-life movement.

“The revised law will mean that the Korean government has relinquished its duties to protect the lives of the unborn. This will inevitably lead to a culture of belittling life, and many women will suffer from their post-abortion traumas, carrying their burden for the rest of their lives,” he told CNA.

He continued: “The Archbishop of Seoul, Cardinal Yeom, has recently delivered (Aug.13, 2020) an official written statement to the Ministry of Justice, expressing deep regrets and deploring the fact that the ministry is promoting legislation for complete repeal of the abortion ban by removing the abortion clause altogether from the criminal law, regardless of the number of weeks into pregnancy … and urging that the government actively fulfill its duties to protect the lives of the unborn by enacting laws and policies that will promote a safe environment for women to give birth to their children.”

The Association of Pro-Life Students in Korea has also mobilized, asking for a statement of solidarity from the Vatican.

Last week the group delivered information about the abortion legislation and letters from college students — translated from Korean into Italian and English — to Msgr. Alfred Xuereb, the Apostolic Nuncio to Korea, with “the hope of informing Pope Francis of the current state of matters and earnestly asking for a message for Korean society,” Shin said.

The student association has also been holding weekly workshops via Zoom, discussing abortion regulations in different countries, and medical and scientific studies on abortion.

South Korean Catholics began a continuousdemonstrationfor the right to life ahead of the Constitutional Court’s decision in April 2019.

“Before the Constitutional Court, congress, and the Blue House, we have been holding a one-person demonstration daily for over 500 days now, to protest against the Court’s decision and urging Congress and the Administration to legislate life-respecting laws,” Shin said.

A group of 40 protesters have alternatedtaking three daily shifts to ensure that the protest has been continuous since March 12, 2019, even throughout the coronavirus pandemic.

A virtual March for Life has been planned for Sept. 5. Participants will individually walk 1.2 miles and submit photos and videos of their march while pro-life leaders give speeches over Zoom.

A recent survey conducted by Ipsos MORI found that South Korea has seen a 20% increase from 2014 to 2020 in the number of people who said that they believe abortion should be permitted, while a growing number of people in Europe expressed opposition to abortion.

“Until now, even if the national criminal law has prohibited abortion, people did not follow it because they have lost consciousness of the dignity of life,” Park said.

He added that the government tried to reduce the rate of birth for economic reasons for many years leading South Korea to have one of the lowest rates of childbirth in the world.

Pope Francis visited a cemetery for aborted children created by the Congregation of Kkottongnae during his trip to South Korea in August 2014.

Shin said that the Kkottongnae religious order is currently in the process of building a new home forsingle mothers and children. The Archdiocese of Seoul has also established a fund to support unmarried women who raise a child on their own.

“Now I think that the number of abortions will increase,” Park said. “But I will keep saying … that even if a national law allows abortion, the law of our conscience does not allow it.”