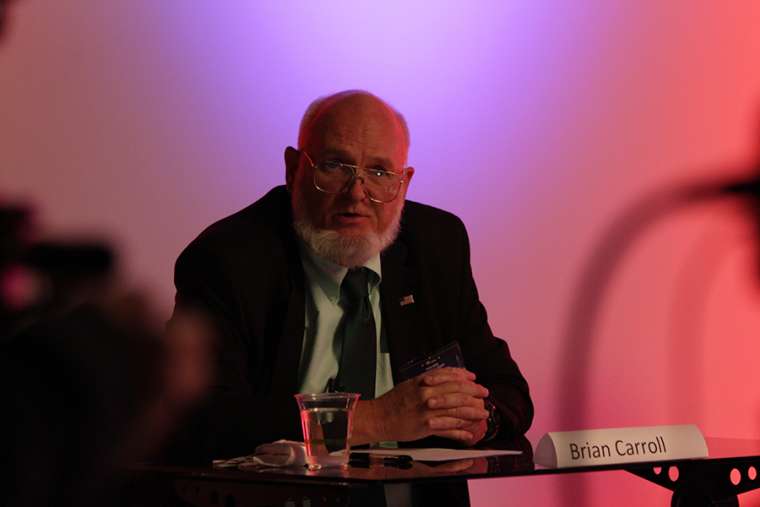 Pro-life third-party candidate Brian Carroll squared-off with other third-party presidential candidates in a debate Thursday evening in Denver, with much of the discourse focusing around the difficulties that third-parties often face in gaining traction in U.S. presidential races, as well as issues surrounding education, surveillance, and drug policy.

Carroll is the presidential nominee of theAmerican Solidarity Party, a third-party founded in 2011 and based largely on Catholic social teaching.

Carroll, an evangelical Christian and a retired history teacher from California, told CNA ahead of the debate that in his view, many Christians prioritize politics over faith, looking for a political messiah in the major parties instead of looking to Christ as savior.

“We also have to keep in mind that the political outlet is not the ultimate outlet. The goal is not to elect a president, the goal is not even to eliminate specific ills in our society. The goal is to give testimony to the part that Jesus plays in our life on a daily basis,” he told CNA.

The American Solidarity Party has attracted attention among some Catholics sincea 2016 essay in First Thingsby philosopher David McPherson. During the 2020 election season, moral theologian Charlie Camosy, who was once a board member of Democrats for Life butquit the Democratic Party because of its abortion extremism, has been aproponentof the party.

The Free and Equal Elections Foundation, which hosted the Oct. 8 debate, is a non-profit non-partisan organization founded in 2008. Thursday’s debate is the second that the group has hosted for third-party candidates this year.

In the debate, Carroll advocated protection for investigative journalists against large corporations, mentioning the case ofDavid Daleiden, a pro-life investigative journalistwho last year was ordered to pay Planned Parenthood $870,000 in punitive damages for secretly recording meetings with abortion doctors and staff to expose their business practices.

Several of the candidates, including Carroll, decried the death penalty and called for its repeal. One candidate mentioned the recent case ofLezmond Mitchell, a Navajo man who was federally executed in August despite the objections of his tribe.

In responding to a question about mandatory vaccinations, Carroll said he supports vaccines, but not vaccine mandates. He also noted that some vaccine research does involveaborted fetal tissue, sometimes curated and sold by abortion providers, which is an issue that pro-life people ought to speak about.

“Once you’re killing one human being for the health and safety of another human being, you’ve got enormous ethical problems,” he said during the debate.

The American Solidarity Party began in 2011 as the Christian Democracy Party USA. Mike Maturen, a Catholic, ran for president on the party ticket in the 2016 election.

Though the American Solidarity Party is not explicitly religious,its platformrests on several principles which the Church has developed as part of Catholic social teaching. Subsidiarity— the Catholic idea that emphasizes the importance of local authorities in decision-making— is a tenet of the ASP’s platform. Carroll told CNA in June that he believes smaller scale, local approaches to handling the pandemic are best, rather than one-size-fits-all pandemic restrictions.

Carroll said the pandemic has exacerbated the divide between large corporations, such as Amazon, which have profited greatly since the start of the crisis, and small businesses which have struggled to stay afloat or have already had to close.

“If we had a Congress that was more sympathetic to distributism, the [relief] bills that they put together would have favored the little guy,” he said.

Abortion is a key issue for members of the ASP. The party platform calls for an end to legal protection for abortion, and it supports social services for mothers in need.

The party says pro-life convictions must also include opposition to euthanasia, assisted suicide, embryonic stem cell research and the death penalty. Carroll said if he is elected, he would push for a constitutional amendment to define “personhood” as beginning at conception.

In addition, Carroll and the ASP consider steps to address climate change and pollution, as well as racial justice and reconciliation, to be a part of their pro-life convictions.

Distributism, the favored economic theory of the party platform, is a model championed by notable Catholics such as G.K. Chesterton and Hilaire Belloc.

The model calls for a broader system of ownership to create a more “local, responsible, and sustainable” economy. The ASP favors a rewrite of regulations and tax incentives to favor small businesses and family farms, rather than major corporations.

The party describes distributism as “an economic system which focuses on creating a society of wide-spread ownership…rather than having the effect of degrading the human person as a cog in the machine.”

Carroll says he had never heard the word “distributism” until he joined the ASP, but as soon as he read the description, it clicked for him.

He said he encounters many people, particularly non-Catholics, who like him were not familiar with the vocabulary of the ASP, but who appreciate the platform once they understand the principles behind it.

Like most political candidates, Carroll’s in-person campaigning efforts have been severely curtailed by the coronavirus pandemic. But he says he has engaged with potential voters and those interested in the party via social media.

As a historian, Carroll said he appreciates that the ASP platform is rooted not just in history, but also in political theory, theology, economics, and ecology.

“There’s an amazing amount of intellectual talent in the party, and all of it goes into the platform,” he commented.

Carroll admits that his chances of actually winning the presidency are remote. The ASP will be on the November ballot in eight states, and a certified write-in option in two dozen others.

He says he is excited by the party’s growth, and says party members are already eying local races for 2022, particularly in Texas.

Like any U.S. third party, Carroll said the ASP hopes to draw converts who typically vote Democrat, Republican, or neither.

“We hope to take an equal number from each party, and then even more so we hope to bring in a lot of people that have simply given up and stopped voting,” Carroll told CNA ahead of the debate.

Carroll said he frequently hears the criticism that a third-party vote in a U.S. presidential election is essentially wasted, or a vote “against” a pro-life candidate with a reasonable chance of winning.

But Carroll said he hopes to provide an opportunity for serious Christians to vote their consciences, rather than choosing between “the lesser of two evils.”

“If you vote for something that you don’t want and you win, have you really won? I don’t think so…Democracy works best when people identify what they want, and then vote for it,” he said.

Carroll said one accusation he hears frequently against the ASP is that it is a “debating society”— that it is made up of mostly well-educated people discussing impractical theory. But Carroll said many of the ASP’s positions have been tried in various places, including in Europe and in certain local areas of the United States.

Carroll said he suspects that the more people learn about the American Solidarity Party and its positions, a wide range of voters— Christian and otherwise— are likely to find it attractive.

“In the privacy of the voting booths, there will be some pro-life atheists and humanists that will vote for us, even if they won’t publicly endorse us,” he predicted.

“My personal goal is for everyone, whether they love us, they hate us, or are completely indifferent and think we’re a joke, at least will have heard of us by November 3, and that the people who want to vote their conscience have at least that opportunity,” Party chairman and vice presidential candidate Amar Patel told CNA in March.

He said he suspects that many Christians and Catholics often end up voting for a candidate who they believe will defend one specific aspect of Christian morality, rather than looking for “ideal candidates who will actually defend the Christian message in total.”

Patel, like Carroll, said he hears a lot about “wasted votes” when it comes to third parties. But in states where a Republican or Democratic victory is all but assured, such as California, even if millions of voters switched to a third party, it would be unlikely to change the outcome, he said.

If that happened, however, the “entire face of American politics would have changed,” because people would be talking about the third-party candidate who garnered millions of votes.

For his part, Carroll said that as a Christian he hopes to encourage people not only to vote their conscience, but to make their politics an outflow of their religious beliefs, rather than the other way around.

“We do have to be paying attention to national politics, but we also need to be protecting our own hearts. We have to be looking at advancing Christ’s Kingdom, not as a theocracy, but as in everybody looking out for their neighbor, and keeping our eyes up, because we don’t know when Jesus is coming back,” he said.

“We have to keep Christ front and center in our lives, or we’re lost.”

Beatification of Carlo Acutis: The...