Assisi in Advent: illuminated frescoes and a nurse in a nativity scene 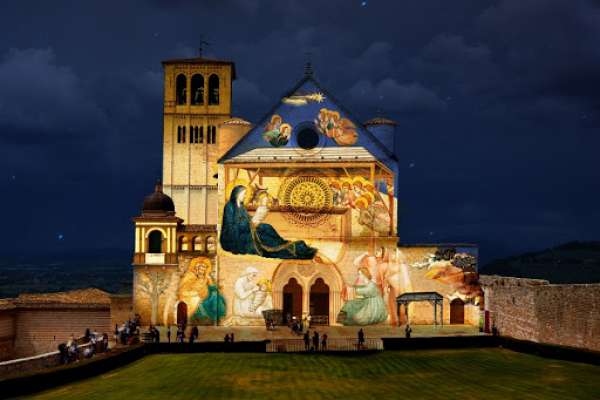 Assisi in Advent: illuminated frescoes and a nurse in a nativity scene

Rome Newsroom, Dec 9, 2020 / 01:00 pm (CNA).- Assisi unveiled a nativity scene Tuesday made of 50 figurines of shepherds, angels, and barn animals with a new addition this year: a life-size figure of a nurse in scrubs wearing a mask.

The diocese said that it wanted symbolically to honor medical workers for their service during the coronavirus pandemic by including a nurse.

“This year we wanted to create a very special nativity scene,” said Fr. Marco Moroni, the Franciscan custos of the Sacred Convent of Assisi.

“In this year so marked by suffering in the pandemic … we immerse ourselves in this nativity and He immerses himself in our humanity. He is present, He is among us, He keeps us company and makes himself a companion in our difficulties and sufferings. It is the Christmas message of all time, and today even more evident,” he said.

As part of Assisi’s Advent and Christmas celebrations, enlarged illuminations of Giotto’s frescoes from the interior of the Basilica of St. Francis will be projected each night onto the city’s churches from Dec. 8 to Jan. 6.

Giotto (1267-1337) is the medieval artist credited with painting frescoes of the life of St. Francis as well as biblical scenes in the Basilica of St. Francis of Assisi.

Painted on the walls and ceilings, these images inside the basilica can be difficult to see. The light display allows passersby and virtual viewers to see Giotto’s Annunciation and Nativity in greater detail.

Giotto’s Nativity is projected on the facade of the Basilica of St. Francis of Assisi, while the Annunciation is illuminated on the Cathedral of San Rufino. Both scenes also have life-size figurines displayed in front of the churches.

Assisi has a special connection with the tradition of nativity scenes. St. Francis of Assisi created the first nativity scene in 1223 in the nearby town of Greccio. Pope Francis traveled to this town last year to sign an apostolic letter, “Admirabile signum,” calling for nativity scenes to be more widely displayed in family homes and public places throughout the world.

The letter also details the story behind St. Francis’ first nativity scene, or crèche. The saint asked a friend 15 days before Christmas to help him prepare “to bring to life” the memory of Christ’s birth in Bethlehem.

“When St. Francis arrived, he found a manger full of hay, an ox and a donkey. All those present experienced a new and indescribable joy in the presence of the Christmas scene. The priest then solemnly celebrated the Eucharist over the manger, showing the bond between the Incarnation of the Son of God and the Eucharist. At Greccio there were no statues; the nativity scene was enacted and experienced by all who were present,” the letter explains.

Thomas of Celano, the first biographer of St. Francis, wrote that someone present at the Mass had a vision of the baby Jesus himself lying in the manger.

“In a particular way, from the time of its Franciscan origins, the nativity scene has invited us to ‘feel’ and ‘touch’ the poverty that God’s Son took upon himself in the Incarnation. Implicitly, it summons us to follow him along the path of humility, poverty and self-denial that leads from the manger of Bethlehem to the cross,” Pope Francis wrote.

To inaugurate the festivities, Cardinal Mauro Gambetti, who received the red hat last month, offered Mass in the Basilica of St. Francis for the Solemnity of the Immaculate Conception before the blessing of the nativity scene.

A 42-foot Christmas tree from Italy’s Trentino province was then lit with 40,000 lights in front of the Basilica of St. Francis, while the Italian singer Gianni Morandi sang “White Christmas.”

“The light of Mary’s purity has always shone in the Christian people. Since the first centuries of Christianity, the lineage of the Virgin Mother, the simple and the little ones of the Gospel, has venerated the all holy, all beautiful,” Gambetti said in his homily Dec. 8.

“Let us draw close to the Virgin Mary … who incessantly repeats with the Spirit: Maranathà, Come Lord Jesus.”

Under Italy’s coronavirus restrictions, people from outside of the region of Umbria will be unable to visit Assisi during the Christmas season, so the Franciscan Friars of Assisi have created a website allowing visitors view the nativity displays along with videos with spiritual reflections.