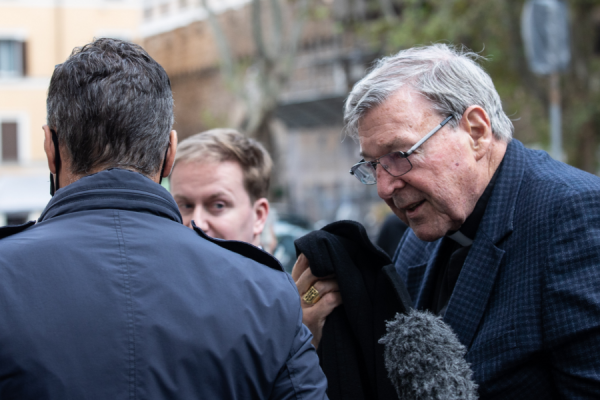 CNA Staff, Oct 23, 2020 / 09:00 am (CNA).- Police in the Australian state of Victoria said Friday that they have no plans for a further investigation into reports of money transfers from the Vatican during the trial of Cardinal George Pell, while federal police have said the information they have received is under their review, and been shared with an anti-corruption commission.

Victoria Police told journalists Oct. 23 that AUSTRAC, Australia’s financial intelligence agency, had shared information with the force regarding the transfers.

“AUSTRAC has made Victoria police aware of transfer of monies from the Vatican over a period of time to Australia,” a police statement said.

“They have not advised Victoria Police of any suspicious activity related to these transactions. In the absence of any other evidence or intelligence, Victoria Police has noted the advice from AUSTRAC. We are not at this time conducting any further investigation.”

On Tuesday, it emerged that the financial intelligence agency had passed details of the transfers to both federal police and state police in Victoria.

During an Oct. 20 Senate committee hearing, Nicole Rose, the chief executive of AUSTRAC, was asked about allegations, first published in Italian media on Oct. 2, that approximately 700,000 euros ($829,000) in Church funds had been sent to Australia at the behest of Cardinal Angelo Becciu for the purposes of influencing Cardinal Pell’s trial on charges of sexual abuse.

Liberal Party senator Concetta Fierravanti-Wells asked Rose about media reports of the transfers “allegedly from Vatican funds to a person or persons in Australia.”

“Yes, I can confirm AUSTRAC has looked into the matter and we’ve provided information to the AFP [Australian Federal Police] and to Victoria Police,” Rose told the Legal and Constitutional Affairs Legislation Committee on Oct. 20.

The exchange during the parliamentary committee session confirmed that AUSTRAC, which is charged with monitoring financial transactions to prevent money laundering, organized crime, tax evasion, fraud and terrorism financing, is aware of the allegations and has apparently identified information meriting police attention or investigation.

The Australian Federal Police said Wednesday that AUSTRAC had passed the information to it as “part of a routine exchange of financial intelligence.”

“The AFP is undertaking a review of the relevant information. The AFP has concurrently referred aspects of this matter to the Victorian Independent Broad-based Anti-corruption Commission,” it said.

Victoria’s anti-corruption agency has powers to investigate the state public sector, including police.

Guardian Australia reported Friday that the commission said that it could not confirm whether it was investigating the referral.

Meanwhile, The Australian newspaper said Thursday that the amount transferred by the Vatican could be higher than initially reported.

It said that as much as AU$2 million ($1.4 million) could have been wired from the Vatican to Australia between early 2017 and mid-2018. It suggested there were four payments, beginning with one of AU$415,000 in February 2017, followed by another in May of that year. This was reportedly followed by third and fourth payments, amounting to AU$1.3 million, in December 2017 and June 2018 respectively.

The Italian newspaper Corriere della Sera first reported Oct. 2 that an alleged money transfer was part of a dossier of evidence being compiled by Vatican investigators and prosecutors against Cardinal Becciu, who was forced to resign by Pope Francis on Sept. 24, in apparent connection to multiple financial scandals dating back to his time as the second-ranking official at the Vatican’s Secretariat of State.

According to another Italian newspaper, Il Messaggero, the allegations regarding a transfer to Australia were made by Msgr. Albert Perlasca, Becciu’s former chief deputy at the secretariat.

Perlasca and Becciu worked together for several years overseeing aspects of curial governance, including the investment of Vatican finances. Perlasca is believed to be cooperating with Vatican prosecutors as part of an ongoing investigation into financial misconduct at the Secretariat of State over a period of years.

CNA has not confirmed the substance of the accusation. Cardinal Becciu has repeatedly denied any wrongdoing or attempt to influence the trial of Cardinal Pell.

Pell has not publicly addressed the allegations, although Robert Richter QC, the former head of his legal defense team in Australia, has called for a public inquiry into the allegations.

After the initial reports, some media outlets speculated that funds could have been sent from Vatican accounts to or through the Holy See’s nunciature in Australia.

On Oct. 6 in Rome, Pope Francis met with Archbishop Adolfo Tito Yllana, apostolic nuncio to Australia. But AUSTRAC’s confirmation that information had been forwarded to both national police and state police in Victoria suggests that any transfer or transfers under investigation could fall outside diplomatic or sovereign channels.

In 2017, Pell took a leave of absence from his role as head of curial finances in the Vatican to return to Australia, where he stood trial on accusations of sexual abuse, attested to at trial by a single alleged victim. After spending more than a year in prison, his conviction was overturned by the Australian High Court earlier this year.

Police in Victoria have been criticized for their handling of the Pell case.

In 2013, Victoria Police opened Operation Tethering, an open-ended investigation into possible crimes by Cardinal Pell. At the time the operation began, no alleged victims had come forward against the cardinal and there had been no criminal complaints made against him. Although they had found no victims or criminal accusations, in 2015 the program was expanded and put on a more formal footing.

In December, CNA reported that, as early as 2014, senior police officials in Victoria discussed that the investigation into Cardinal Pell could be used to deflect public scrutiny from a corruption scandal in the force, linked to organized crime.

Cardinal Pell served as the first prefect for the Secretariat of the Economy in the Vatican, a department created by Pope Francis in 2014 to bring coherence and transparency to the administration of curial finances.

From 2011 to 2018, Cardinal Becciu served as “sostituto” at the Secretariat of State. CNA has reported that Becciu and Pell clashed repeatedly over the Australian cardinal’s attempts to reform Vatican finances.

Following the allegations that Becciu used Vatican funds in an attempt to interfere in Pell’s trial in Australia, on Oct. 17 Becciu’s lawyer, Fabio Viglione, said that, “regarding the everlasting attention of some journalists to Cardinal Pell’s trial,” Becciu “is compelled to reiterate vigorously that he has never interfered with it in any way whatsoever.”

The lawyer also said that “to protect and defend his honor, so gravely damaged,” Becciu may seek legal recourse against some news organizations for their continued reporting of “an alleged, albeit non-existent activity to taint the evidence of Cardinal Pell’s trial.”