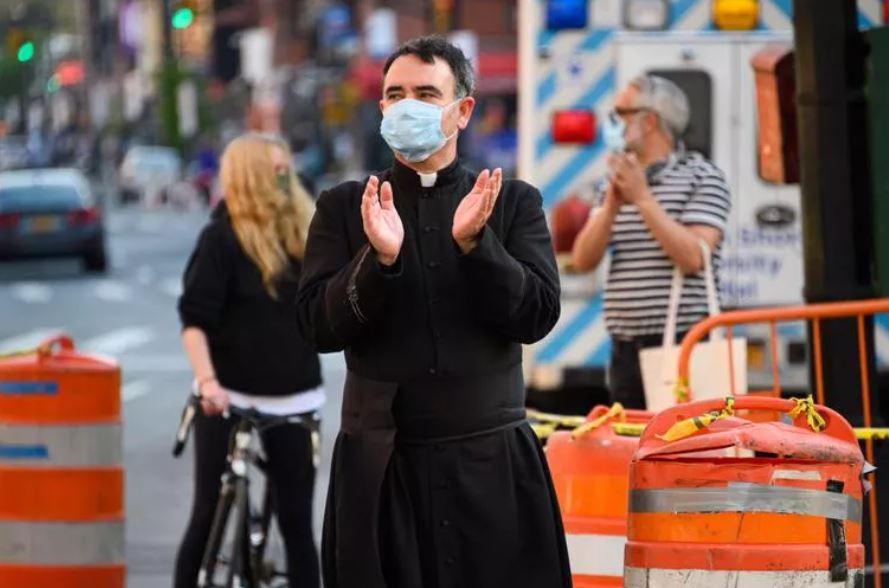 Amid deeply polarized views on how society should respond to COVID-19, Catholic thinkers propose measured approaches that recognize the need for care of body and soul.

As members of a global Church grounded in charitable works, Catholics should be well-positioned to offer solutions to a pandemic that has affected the entire planet.

But diversity of thought about how to respond to COVID-19 is as rampant within the Church as it is elsewhere, with some Catholics advocating for widespread lockdowns and others opposing mask orders and other restrictions.

Indeed, for an endorsement of strict measures to contain the spread of the coronavirus, Catholics need look no farther than Pope Francis.

In his new book, Let Us Dream: The Path to a Better Future, Francis decries governments that “shrugged off the painful evidence of mounting deaths” and groups that protested distancing and travel restrictions as a political assault on autonomy or personal freedom. Governments that imposed strict restrictions, Francis said, acted to place the well-being of their people first.

By contrast, Archbishop Carlo Viganò, in a recent message sent to writer Robert Moynihan, contends that official data, including that from the World Health Organization, show the virus has a slightly higher mortality rate than that of the normal seasonal flu. He believes COVID-19  is being used to create a global social and economic crisis and to legitimize the reduction of people’s basic rights.

Falling between these views are Catholics and others who support some level of precautions in the face of the virus but acknowledge the harm that a one-size-fits-all application can cause to businesses, education, and spiritual, mental and physical health.

Among those challenging current lockdown policies are more than 43,000 medical and public-health scientists and medical practitioners who have signed the Great Barrington Declaration, citing devastating effects on public health.

Dr. Jay Bhattacharya, a co-author of the declaration and professor of medicine at Stanford University, said the economic devastation and severe disruptions in medical services caused by the lockdowns will plunge 150 million additional children into poverty, put 130 million poor people worldwide at risk of starvation and through disruption of vaccination campaigns place 80 million children at risk of diptheria, measles and polio. In the U.S., he said, one in four young adults seriously considered suicide last June as a consequence of the isolation caused by the lockdowns.

And a new Gallup poll found that Americans’ self-reported mental health is at the lowest point in 20 years.

Signers of the declaration are proposing a plan called “Focused Protection” that would allow those at minimal risk of death from the virus to live normally and build up immunity through natural infection while protecting those at highest risk.

Dr. Laura Lazzeroni, a signer of the declaration and a Catholic who is a Stanford professor of psychiatry and behavioral sciences and of biomedical data science, told the Register she considers the declaration to be entirely consistent with Christ’s teaching to love others as oneself.

Proponents of lockdowns and similar regulations assume they are effective in reducing risk and that the harms they cause are negligible, Lazzeroni said. Opponents like her, meanwhile, believe there has been no rigorous scientific demonstration of their effectiveness and that in fact there is evidence to the contrary.

“The arguments about which group has the moral high ground are largely due to disagreements about these basic premises of effectiveness and harm,” she said.

Bishop Thomas Paprocki of Springfield, Illinois, has taken a similar stance by applying the Catholic principles of ordinary and extraordinary means of preserving life to the pandemic response.

In suggesting that shutdowns constitute unduly burdensome and extraordinary means, Bishop Paprocki told the Register he is not advocating that no measures be imposed to curb the spread of the virus.

“We have to take proper precautions,” he said, “but we can have a very robust conversation about what those means should be, what is the extent of them and the fact that we don’t have to do everything in the extreme to address this in a responsible way.”

Bishop Paprocki has seen the negative effect the isolation imposed by extreme restrictions has had on his 102-year-old aunt and godmother, who was prevented from seeing her family except through a window on her birthday. The bishop also expressed concern about Catholic prisoners in state and federal facilities in Illinois going without Mass and the sacraments since March because priest chaplains who visit the prisons are treated as volunteers and barred from entry under COVID restrictions. The prisons do have resident chaplains, but they are not Catholic.

“In terms of the general public, this is probably not going to attract a lot of attention,” Bishop Paprocki said, “but [prisoners] are still people, and they have souls. If prisons are to be more than warehouses and are to be places of rehabilitation; the fact that prisoners are being denied access to [Catholic] religious services is very wrong.”

Since expressing his views in an essay in September that was sent to every U.S. bishop, Bishop Paprocki said he thinks Catholic leaders are showing reluctance to support another wave of church shutdowns.

Deacon Timothy Flanigan, a doctor and professor of medicine at Brown University’s Alpert Medical School, said Catholics can go to Mass safely during a pandemic, provided certain guidelines are followed. He has worked with two other physicians to develop a detailed set of guidelines for the safe celebration of Mass and the sacraments. A review of more than 1 million public Masses where the guidelines were in place has shown that no outbreaks of COVID-19 have been linked to church attendance.

Deacon Flanigan told the Register, as Catholics, “We want to work to mitigate or decrease the spread of the virus while at the same time recognizing that prayer, worship and sacraments are essential. If we can participate in all of that safely, we should.”

Despite the polarization that has occurred in the debate over COVID, Deacon Flanigan said he thinks a balanced approach is possible. Besides the resumption of worship services, he cited the reopening of many schools for children in grades K-12.

Although many predicted disaster if schools resumed in-person learning in the fall, the deacon said there is now a consensus among the Centers for Disease Control, the American Academy of Pediatrics and other experts that in-person learning is critically important and distance learning is inadequate for students in grades K-12. Catholic schools in particular have taken the lead in demonstrating how in-person classes can be resumed safely, as has been seen in the Archdiocese of Boston and other places.

However, health-care facilities remain an area in which it has been difficult to achieve a more balanced approach to dealing with the coronavirus that addresses both the physical and spiritual. Joseph Meaney, the president of the National Catholic Bioethics Center, experienced this when he landed in a hospital in May.

While providing good care for his body, the secular hospital where Meaney was admitted kept him from seeing a priest who would have ministered to his soul during his four-day stay. Although he had tested negative for COVID-19, his repeated requests for the sacrament of the sick were denied. Meaney called this a “near-catastrophic failure in spiritual care” and said his religious-liberty rights as a Catholic were gravely violated. During his hospital stay he received visits from lay Catholic chaplains, but neither could administer the sacraments he desired. Both his own parish priest and Archbishop Emeritus Charles Chaput were denied admittance to the hospital because of a highly restrictive coronavirus policy.

Meaney said he considers blanket no-visitor policies that exclude clergy to be unreasonable and unconscionable. Hospitals such as the one where he was a patient, he added, could easily require priests to wear personal protective equipment and be trained in safety precautions.

Before his hospital admission, Meaney had heard of such things happening in the wake of COVID, but he said, “It makes a difference when it happens to you personally.”

The National Catholic Bioethics Center since has heard from many people who have told of similar situations and especially of loved ones dying alone without the benefit of the last rites, Meaney said. In response, the center has published a resource on the pandemic and the right to the sacraments.

Extreme situations like the coronavirus pandemic often beget extreme reactions, Meaney said, but for Catholics, virtue lies in the mean or the healthy middle. “When in an extreme situation frequently the right reaction is not to go 100% in one direction or another.”

Maryann Cusimano Love, an associate professor at The Catholic University of America and a member of the Vatican COVID-19 commission, said finding a balanced solution to dealing with the virus requires the kind of dialogue and engagement between people of opposing views that Pope Francis talks about in Fratelli Tutti (Fraternity and Social Friendship).

“Unfortunately,” she told the Register, “our abilities to do this were degraded prior to the pandemic. Our reliance on social media and online platforms became greater during the pandemic, but they were not based on whether information is true or healthy for society but on whether something gets more ‘clicks.’ So there is a tendency to publish and disseminate the most sensational information because it generates more attention. It’s not a great way to start a conversation.” Talking with people who hold different views, she said, requires giving the benefit of the doubt and avoiding vilification and demonization.

Love said she sees the pandemic as a test of how well Catholics are interested in and willing to put into practice such principles as the sanctity of all human life and the protection of society’s weakest members in solidarity with the poorest and weakest members.

“I see some communities are willing to do that and some are not.” For example, she said, she finds it curious that people oppose simple measures like wearing a mask that require little of the wearer. Those who complain that their rights are being violated by such restrictions, she added, forget that rights are tied up in responsibilities to others, particularly the elderly, the poor and the sick.

It is understandable, she said, that the virus and its accompanying restrictions have people out of sorts and riddled with fear and anxiety. “But the opportunity in this moment is that by shaking us out of our routine, our comfort zones, it can help elevate our empathy for others. Not being able to find our favorite foodstuff on the grocery shelves or not being able to shop or eat out can be an opportunity to be in solidarity with those who face more pressing concerns.”