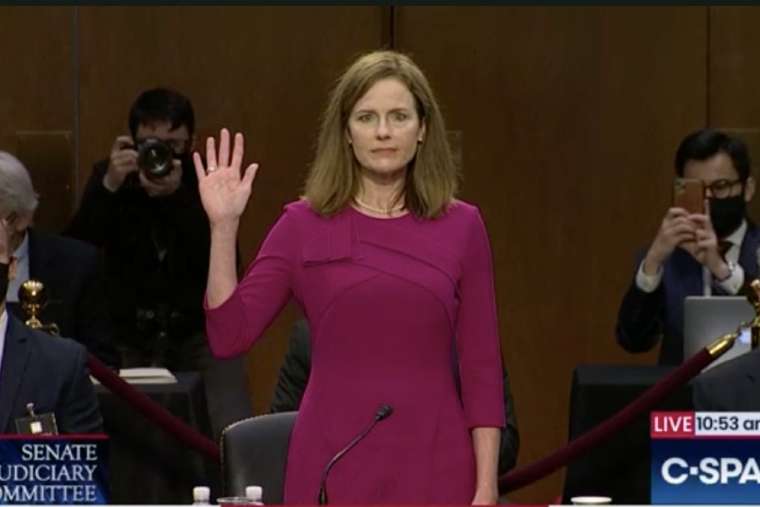 As Senate Democrats on Monday focused on how Supreme Court nominee Amy Coney Barrett could rule on the Affordable Care Act, some comments drew criticism for apparent anti-Catholic bigotry.

The Senate Judiciary Committee on Monday held the first in a series of hearings to consider the nomination of Seventh Circuit Court Judge Amy Coney Barrett to the Supreme Court. Barrett is a Catholic mother of seven children, including two adopted children, and formerly taught at the University of Notre Dame law school.

Sen. Chris Coons (D-Del.), in his opening statement in the confirmation hearings for Barrett, warned that Barrett’s confirmation could lead to some previous Supreme Court rulings being overturned in the future, including Griswold v. Connecticut which found a right to contraception.

The comment triggered a rebuke by Sen. Josh Hawley (R-Mo.), who saw Coons’ warning about contraception being at risk as an “another hit” on Barrett’s Catholic faith, given the Church’s teaching against contraception. Hawley said that the assertion was unfounded, as the Griswold decision has not been challenged in decades.

Monday’s hearing consisted of opening statements from committee members, and from Barrett herself, as well as Indiana senators and a former dean of the University of Notre Dame Law School. Subsequent hearings will feature senators asking questions of Barrett and of other witnesses summoned to testify about her nomination.

Barrett, in her opening remarks, said that she believed “Americans of all backgrounds deserve an independent court that interprets our Constitution and laws as they are written.” She also said that policy decisions should not be left to the Court.

“The policy decisions and value judgements of government must be made by the political branches elected by and accountable to the People,” she said.

Senate Democrats on Monday focused most of their statements on the supposed threat that Barrett’s confirmation would pose to the future of the Affordable Care Act (ACA).

In 2017, Barrett authored an essay that was critical of Chief Justice John Roberts’ decision to uphold the law’s individual mandate, which she said “pushed the Affordable Care Act beyond its plausible meaning to save the statute.” The “individual mandate” was the law’s requirement that American adults purchase health insurance.

The latest challenge to the ACA will be heard by the Court on Nov. 10, in the cases ofCaliforniav.TexasandTexasv.California.

Sen. Dianne Feinstein (D-Calif.), the ranking minority member of the committee, warned that “women could lose access to preventative services and critical maternity care, including cancer screenings and well-woman visits” if Barrett was part of a future Court majority in striking down the ACA’s mandate.

Other senators, including Coons, said that previous Supreme Court rulings in favor of contraception, abortion, and same-sex marriage could be at risk with Barrett’s confirmation.

Sen. Kamala Harris (D-Calif.), the Democratic vice presidential nominee, said that a “right to safe and legal abortion is at stake.”

Some Senate Republicans, including Hawley, on Monday decried what they saw as unseemly attacks on Barrett’s religious beliefs by Democrats and members of the media.

Barrett’s membership in the ecumenical group People of Praise has been the subject of recent news articles, including in The Guardian which called the group “secretive” and in the Washington Post, which noted Barrett’s position of “handmaid” in People of Praise, a biblical term.

Democrats on Monday focused their statements on health care, but have made recent suggestions that while Barrett’s religion is “irrelevant” to her confirmation, her faith-based views on issues such as abortion deserve scrutiny.

“Her faith is irrelevant,” Sen. Mazie Hirono (D-Hawaii) said of Barrett at a Sept. 30 press conference. “What the real issue her is whether her closely-held views can be separated from her ability to make objective, fair decisions with a lifetime appointment.”

The group Americans United for Separation of Church and Statetweetedon Monday during the hearing that the Constitution forbids religious tests for nominees, but that it “ALSO prohibits lawmaking based on a narrow minority’s religious beliefs, right?

Republicans on Monday pointed to previous hostile questioning of Barrett by some committee senators in 2017, when Sen. Feinstein told Barrett her religious views were “of concern” when Barrett was being considered for the Seventh Circuit Appeals Court.

Feinstein told her that “when you read your speeches, the conclusion one draws is that the dogma lives loudly within you. And that’s of concern.” At that hearing, Sen. Dick Durbin (D-Ill.) cited Barrett’s writings to ask her what she thought an “orthodox Catholic” looked like.

“This committee isn’t in the business of deciding whether the dogma lives too loudly within someone,” Sen. Ben Sasse (R-Neb.) said Monday.

Hawley also brought up Harris’ questioning of several judicial nominees on their membership in the Catholic fraternal men’s organization Knights of Columbus, in 2018. Other judicial nominees, he said, faced questions from Democrats on their views on sin and the afterlife, as well as other matters.

Harris’ questions about the Knights of Columbus were examples of “the very terminology” of historic anti-Catholic bigotry making a resurgence, he said.

“That is an attempt to bring back the days of the religious test.”

Sixty-five million Americans are Catholics, Hawley noted, asking if they are “to be told that they cannot serve in public office” unless committee members “sign off” on their beliefs.

Identifying as a Christian, he said that “we got a whole bunch more really weird beliefs” such as forgiveness of sins, the virgin birth of Christ, Jesus’ resurrection from the dead, and eternal life.

“There are a whole bunch of really, really crazy ideas that are a lot weirder than some Catholic moms giving each other advice about parenting,” he said in a shot at media reports on Barrett’s membership in People of Praise.