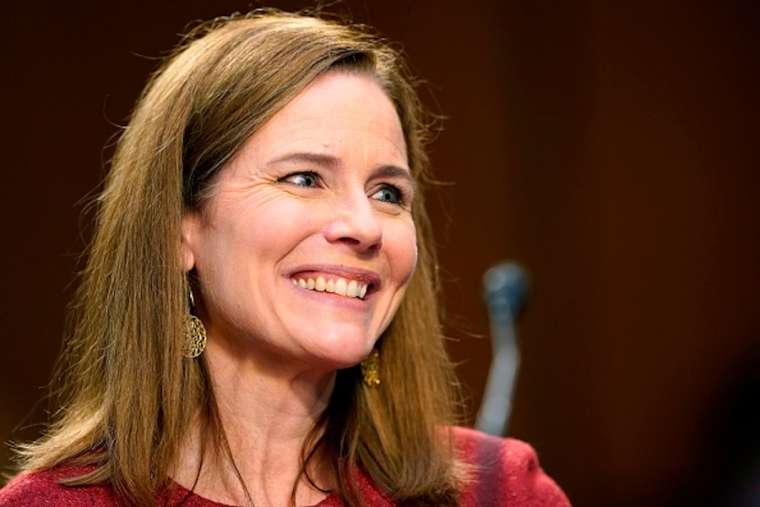 Supreme Court nominee Amy Coney Barrett was pressed on Tuesday for her position on abortion, marriage, and health care, during her first day of questioning by members of the Senate Judiciary Committee.

Barrett’s Catholic beliefs have been the subject of some scrutiny in the press in recent weeks, but on Monday and again on Tuesday, Democratic senators said that her religion would not be a topic of questions.

But the nominee did tell senators Tuesday that she could “set aside” Catholic doctrine when making a decision on the bench,

While affirming the importance of her Catholic faith, Barrett said that she could “set aside” Church teaching when ruling on the bench, in order to make judgments based upon her reading of the law. Sen. Lindsey Graham (R-S.C.), chair of the Senate Judiciary Committee, had asked her if she could “set aside whatever Catholic beliefs you have regarding any issue before you.”

“I can,” Barrett answered, saying that she has done so while serving as a judge on the Seventh Circuit appeals court and “if confirmed to the Supreme Court, I will do that still.”

Barrett is a Catholic mother of seven who is a judge on the Seventh Circuit Court of Appeals. She formerly taught at the University of Notre Dame law school.

Pressed repeatedly for her views on abortion, marriage, health care, and other issues, Barrett invoked a standard on Tuesday that she credited to Ruth Bader Ginsburg when she had been considered for the Court: “no hints, no previews, no forecasts” of future decisions, as Barrett summarized it.

“I can’t grade precedent,” Barrett said, noting elsewhere that “it’s inconsistent with the duties of a sitting judge…to take positions on cases that the Court has decided in the past.”

However, glimpses of her judicial philosophy did appear at times during the hearing. When asked by Sen. Amy Klobuchar ifRoe v. Wade, the 1973 Supreme Court decision that legalized abortion in all 50 states, was “super-precedent” of the Court, Barrett indicated that it was not.

“Super-precedent” is a standard applied by some legal scholars to particular Court decisions that are, as Barrett said on Tuesday, so well-settled that virtually no one is currently pushing for their repeal.

“And I’m answering a lot of questions aboutRoe, which I think indicates thatRoedoesn’t fall in that category,” Barrett said of “super-precedent,” adding that “scholars across the spectrum” say “that doesn’t mean thatRoeshould be overruled.”

While on the Seventh Circuit, Barrett ruled on a few abortion-related cases that were discussed on Tuesday.

Sen. Joni Ernst (R-Iowa) asked the nominee about a case in which she joined with the court majority to uphold Chicago’s eight-foot “buffer zone” rule that barred pro-life sidewalk counselors from approaching within that distance of an abortion facility.

In an exchange with Sen. Patrick Leahy (D-Vt.), Barrett explained another abortion-related case she was involved with.

When a three-judge panel of the Seventh Circuit struck down Indiana’s mandate that fetal remains be buried or cremated, an appeal to the full court by the state was unsuccessful.

Barrett was one of the judges dissenting from the court’s denial of the appeal, and she joined a dissent by Judge Frank Easterbrook. In that dissent, Easterbrook argued that the fetal remains law couldn’t be struck down simply because the Court thought unborn babies were not persons. He also said that the Supreme Court had not overturned state bans on sex-selective or disability-based abortions.

During his questions, Leahy also brought up a pro-life open letter signed by Barrett from 2006 in the South Bend Tribune and asked her if she agreed with a policy position of the group organizing the petition, which opposed in vitro fertilization (IVF).

Barrett said that she had signed the statement on her way out of Church, which “simply said” that “we support the right to life from conception until natural death.” She declined to give her opinion on IVF on Tuesday so as not to affect any future cases before the Court.

Sen. Dick Durbin (D-Ill.) did ask her about race, particularly the impact watching the video of George Floyd had on her. Barrett called it “very, very personal,” having adopted two Black children from Haiti.

Sen. Ted Cruz (R-Texas) also brought up the matter of religious freedom, and criticized his Democratic colleagues for perceived hypocrisy.

He mentioned the religious freedom case of the Little Sisters of the Poor against the federal contraceptive mandate which would “force them to pay for abortion-inducing drugs” among other drugs and procedures.

Religious freedom under the law, he said, extends to the sisters who “take oaths of poverty” and who “devote their lives” to caring for the sick and the elderly.

“Somehow missing from that amplification,” he said, was Pope Francis’ visit to the Little Sisters of the Poor residence in Northeast D.C. during his 2015 trip to the U.S. A Vatican spokesman told the press that Pope Francis visited the home to show support to the sisters’ during their court battle against the contraceptive mandate.

While Barrett refrained from offering her judicial opinions on controversial issues, Democratic senators still asked her repeatedly about abortion and warned that they did not trust her to be impartial.

Sen. Richard Blumenthal (D-Conn.) still tried to get Barrett to answer on abortion, citing the example of “Samantha” who was a sexual assault survivor and who felt she need to have an abortion. He asked if that was protected by the Constitution.

Barrett simply answered thatRoe v. Wade“clearly held” that women have a right to terminate a pregnancy, and that the 1992 rulingPlanned Parenthood v. Casey builtupon that decision.

Graham asked her about the issue of abortion, noting that states have enacted “heartbeat” bans on abortion at the detection of a fetal heartbeat—usually around six to eight weeks in a pregnancy—as well as 20-week abortion bans.

Sen. Dianne Feinstein (D-Calif.), the ranking minority member of the committee, brought up the dissent inPlanned Parenthood v. Casey, in which Justice Antonin Scalia and others stated that “we believe thatRoewas wrongly decided” and could be reversed.

Feinstein asked Barrett if she agreed, and Barrett gave the answer that she would largely repeat throughout the day: she would not give her opinion on Supreme Court precedent, which she said “signals to litigants that I might tilt one way or another in an impending case.”

Feinstein continued pressing her on abortion, guns, health care, and LGBT issues, but Barrett said regarding LGBT issues that she would not give her opinion on the Court’s ruling in theObergefelldecision that legalized same-sex marriage across the country.

Pompeo calls for Belarus to allow...