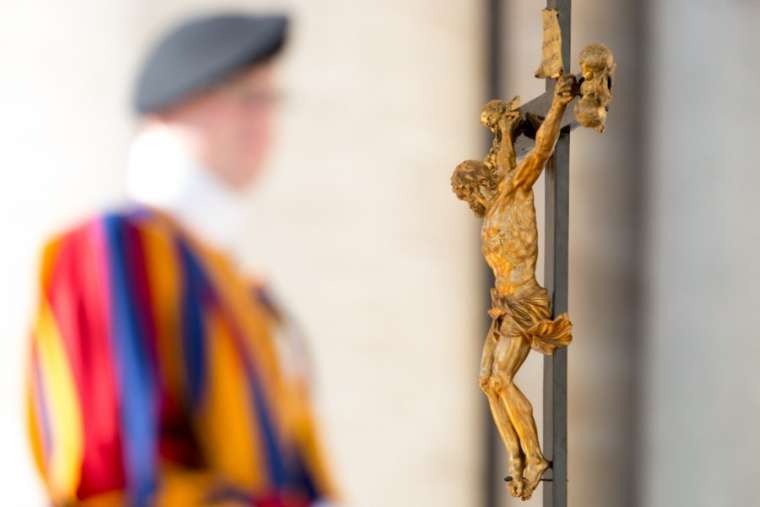 Pope Francis Friday met with the 38 new recruits of the Swiss Guard, who will be sworn-in Oct. 4, encouraging them to be faithful to Christ.

“May the oath you take the day after tomorrow also be a testimony of fidelity to your baptismal vocation, that is, to Christ, who calls you to be men and Christians, protagonists of your existence,” Pope Francis said.

“With his help and with the power of the Holy Spirit, you will calmly face the obstacles and challenges of life. Do not forget that the Lord is always at your side: I sincerely wish you to always feel his consoling presence.”

The swearing-in ceremony for new Swiss Guards usually takes place on or close to May 6, but due to the coronavirus restrictions in Italy at that time,it was movedto Sunday, Oct. 4. The ceremony will take place privately.

Pope Francis met with the 38 new recruits and their parents ahead of the swearing-in ceremony.

In the audience Oct. 2, the pope said he was happy to meet the newest Swiss Guards “who have chosen to dedicate a period of their youth to the service of the Successor of Peter.”

He added that the presence of their family members “expresses the devotion of Swiss Catholics to the Holy See, as well as the moral education and good example with which parents have passed on to their children the Christian faith and the sense of generous service to others.”

Francis recalled the May 6 anniversary of the Sack of Rome, the 1527 battle in which 147 Swiss Guards lost their lives defending Pope Clement VII from mutinous troops of the Holy Roman Empire.

“The memory of that event may evoke in you the danger of a spiritual ‘sacking,’” the pope said, noting that “in the current social context, many young people run the risk of having their souls stripped, when they follow ideals and lifestyles that respond only to material desires or needs.”

He also encouraged the young men to take advantage of their time in Rome to increasetheir spiritual, linguistic, and cultural knowledge.

“The time you will spend here is a unique moment in your existence: may you live it with a spirit of brotherhood, helping one another to lead a life rich in meaning and joyfully Christian,” he said.

Pope Francis expressed his gratitude to the entire Swiss Guard corps for what they do and how they perform their tasks.

He recalled the words of St. Teresa of Calcutta, that “at the end of life we will not be judged for how many things we have done, but for how much love we have put into those things.”

“I assure you of my prayers for all your good intentions; and you too, please, pray for me,” he said, before concluding by imparting his apostolic blessing.

The Pontifical Swiss Guard holds the title for the world’s smallest but oldest standing army.

Every year, the guards commemorate the anniversary of the Sack of Rome with aweekend of events, attended by representatives of the Swiss army, Swiss government, and Swiss bishops’ conference, as well as family and friends, and former guards.

In past yearsthe festivities also included a concert and an audience with Pope Francis.

Due to the coronavirus and the restrictions placed on traveling and gathering in Italy at that time, the anniversary was marked this year by Mass followed by the “laying of the wreath,” in the Square of the Roman Protomartyrs in Vatican City.

At the swearing-in ceremony on Sundayeach new recruit will approach the flag of the Swiss Guard when his name is called out. Firmly grasping the banner with his left hand, the new guard raises his right hand and opens three fingers as a sign of his faith in the Holy Trinity.

As he holds up his fingers, the guard proclaims this oath: “I, (name), swear diligently and faithfully to abide by all that has just been read out to me, so grant me God and so help me his saints.”

In English, the full oath reads: “I swear I will faithfully, loyally and honorably serve the Supreme Pontiff Francis and his legitimate successors, and also dedicate myself to them with all my strength, sacrificing if necessary also my life to defend them. I assume this same commitment with regard to the Sacred College of Cardinals whenever the see is vacant. Furthermore, I promise to the Commanding Captain and my other superiors respect, fidelity and obedience. This I swear! May God and our Holy Patrons assist me!”