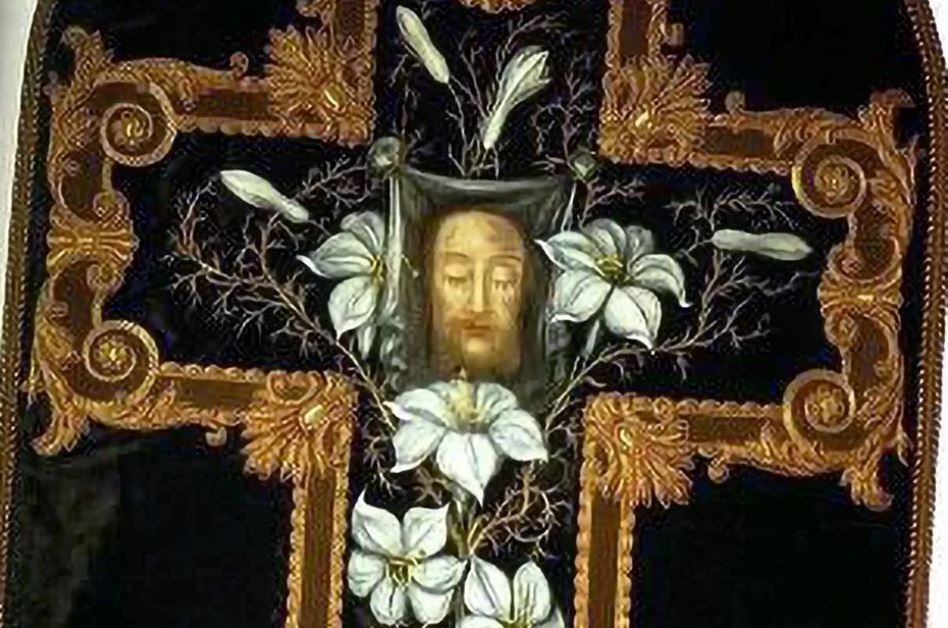 While in the Carmel, the little saint created some of the most intricate liturgical vestments, which are still in existence.

I’m telling you a story I recall from my own childhood. I was perhaps 5 or 6 when I received a children’s book about St. Thérèse the Little Flower; and I read it over and over, memorizing some of my favorite parts. I learned that Zélie Martin, Thérèse’s mother, was a lacemaker by profession, and that she operated a small business on the Rue Saint-Blaise, where she created the elegant and costly lace for which Alençon was known.

Zélie Martin had once hoped to enter religious life and to serve the sick at the Hôtel-Dieu, the hospital in town. When the prioress of the Canonesses Regulardiscouraged her inquiry, she learned the trade of lacemaking instead, and she set up her own shop when she was only 22. She went on to marry a jeweler and watchmaker, Louis Martin. Both of the Martins were devout Catholics.

Anyway, it would seem that little Thérèse acquired her mother’s talent for needlework. And life as a cloistered nun was not all prayer; there was also time for work, which was also humbly offered to God as a form of active prayer. While in the Carmel, the little saint created some of the most intricate liturgical vestments.

I recently stumbled upon this photo of a beautiful and ornate chasuble which Thérèse had crafted by hand. The chasuble was made from an old brocade dress which had belonged to her mother, Madame Martin. The ground color is deepest green; and St. Thérèse hand-painted the Holy Face and the vines and roses.