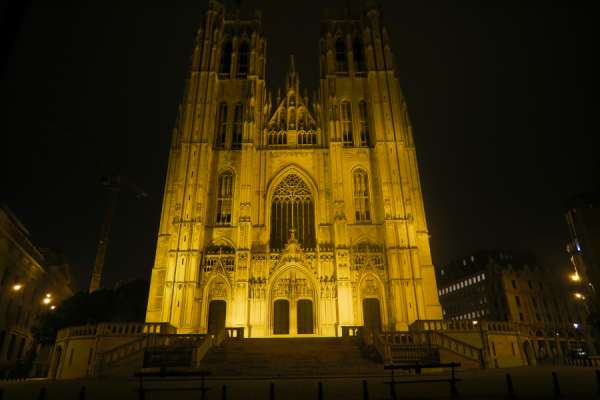 Rome Newsroom, Dec 11, 2020 / 04:00 am (CNA).- The government of Belgium has agreed to ease restrictions on Mass celebrated with the public beginning Dec. 13, permitting a maximum of 15 people to participate in the liturgy.

The bishops’ conference of Belgium released a statement Dec. 10 noting the “slight easing” on attendance at public Masses.

The new regulation for Masses allows a total of 15 participants at liturgies, while previous measures only allowed for four. Children under the age of 12 do not count toward the total attendance.

“This slight easing offers new opportunities, including that of going to church as a family or in a group,” the bishops said.

“On ordinary Sundays and even more on Christmas Eve and Christmas Day, many worshipers will unfortunately be refused entry.”

The bishops said that Mass would continue to be broadcast by radio and television, encouraging Catholics to remember that the new public worship measures “should in no way give the impression of a decrease in the severity of the pandemic.”

Belgium, a country of 11.5 million people bordering France, Germany, Luxembourg and the Netherlands, is widely reported to have the world’s highest COVID-19 death rate. More than 600,300 people have tested positive for coronavirus and 17,692 have died in Belgium as of Dec. 11, according to the Johns Hopkins Coronavirus Resource Center.

Pastors will have to determine whether their parishes can accommodate 15 people while maintaining the requirement of 10 square meters (32.8 square feet) of space for individuals or family groups.

Christmas Eve Masses will not be able to be held at midnight due to curfews which begin at either 10 p.m. or 12 a.m. depending on the city.

Bishops have encouraged priests to keep churches open for private prayer as much as possible.

The Church in Belgium initially suspended public Masses in March as the country entered its first national lockdown. Churches remained open for individual prayer, as well as baptisms, marriages, and funerals with strictly limited numbers.

Public worship resumed in June, but was suspended once again on Nov. 2 amid a second national lockdown following a new spike in coronavirus cases. The suspension was originally intended last until at least Jan. 15, 2021.

The government issued a new ministerial decree Nov. 29, allowing certain non-essential businesses to reopen before Christmas, but a change in the suspension of public Masses was not mentioned.

Lay Catholics announced shortly after the decree their intention to organize individual civil suits challenging the suspension, citing what they said was subjective prejudice against them since the Belgian Constitution protects freedom of worship.

On Dec. 8, Belgium’s Council of State ordered the government to review the ban on public Masses for being disproportionate, when considered in context with other activities which were allowed.