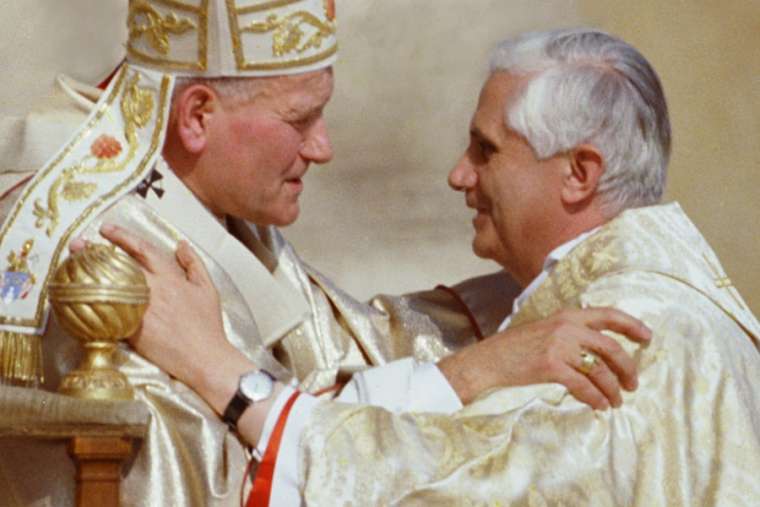 John Paul II was a “liberating restorer of the Church” in the turbulent years after the Second Vatican Council, Benedict XVI has said in a letter marking the 100th anniversary of the saint’s birth.

In a message to Cardinal Stanis?aw Dziwisz, John Paul II’s personal secretary, the Pope emeritus said that the Polish pope had faced “an almost impossible task” when John Paul was elected to the papacy in 1978.

“Yet, from the first moment on, John Paul II aroused new enthusiasm for Christ and his Church. His words from the sermon at the inauguration of his pontificate: ‘Do not be afraid! Open, open wide the doors for Christ!’ This call and tone would characterize his entire pontificate and made him a liberating restorer of the Church,” Benedict wrote.

In a 2,000-word letter that mixed personal reminiscences with theological reflection, the Pope emeritus traced John Paul II’s life from his birth in a newly independent Poland on May 18, 1920, to his death on the eve of the feast of Divine Mercy on April 2, 2005.

Benedict also defended the integrity of John Paul II’s fast-tracked sainthood cause and suggested that history would determine whether he deserved the epithet “the Great”, alongside popes Leo I and Gregory I.

The letter, dated May 4, was released May 15 at 11 a.m. local time by the Polish bishops’ press office, which provided an English translation from the original German.

Benedict, who succeeded John Paul II as pope in 2005, said that his predecessor was born at a time of both “oppression” and “great hope.” Poland had regained its independence in 1918, but was still threatened by Germany and Russia.

He recalled that after the Nazis had occupied Poland in 1939, the young Karol Wojty?a had worked in the quarry of a chemical plant while secretly preparing for the priesthood.

“Of course, Karol not only studied theology in books but also through his experience of the difficult situation that he and his country found itself in,” he wrote.

“This is somewhat a characteristic of his whole life and work. He studied books but the questions that they posed became the reality that he profoundly experienced and lived.”

Benedict said that the future pope was also shaped by Vatican II, whose sessions he attended first as an auxiliary bishop and later as the Archbishop of Kraków.

“The Second Vatican Council became the school of his entire life and work,” he observed, highlighting John Paul’s contribution to the Council’s 1965 Pastoral Constitution on the Church in the Modern World, Gaudium et spes.

“The answers developed by the Council would pave the way for his mission as bishop and, later, as pope,” Benedict wrote.

He argued that when John Paul II was elected to the papacy the Church was “in a dramatic situation.”

He wrote: “The deliberations of the Council had been presented to the public as a dispute over the Faith itself, which seemed to deprive the Council of its infallible and unwavering sureness. A Bavarian parish priest, for example, commented on the situation by saying, ‘In the end, we fell into the wrong faith.’”

“This feeling that nothing was no longer certain, that everything was questioned, was kindled even more by the method of implementation of liturgical reform. In the end, it almost seemed that the liturgy could be created of itself.”

Benedict continued: “Paul VI brought the Council to an end with energy and determination, but after its conclusion, he faced ever more pressing problems that ultimately questioned the existence of the Church Herself.”

“At that time, sociologists compared the Church’s situation to the situation of the Soviet Union under the rule of Gorbachev, during which the powerful structure of the Soviet state collapsed under the process of its reform.”

He said that John Paul II was able to restore the Church’s equilibrium, helped by the fact that the Polish Church had experienced “a joyful renewal” in the wake of Vatican II while struggling against communism.

Through his extensive travels and his 14 encyclicals, the Polish pope shared “a message of joy” and “comprehensively presented the faith of the Church and its teaching in a human way,” Benedict said.

He identified the “true center” of the saint’s life as the Divine Mercy devotion promoted by the Polish nun Faustina Kowalska.

Benedict, who served as prefect of the Vatican Congregation for the Doctrine of the Faith under John Paul II, recalled that his Congregation had twice advised the pope not to establish the Second Sunday of Easter as Divine Mercy Sunday.

“It was certainly not easy for the Holy Father to accept our reply,” he recalled. “Yet, he did so with great humility and accepted our negative response a second time. Finally, he formulated a proposal that left the Second Sunday of Easter in its historical form but included Divine Mercy in its original message.”

“There have often been similar cases in which I was impressed by the humility of this great pope, who abandoned ideas he cherished because he could not find the approval of the official organs that must be asked according to established norms.”

Benedict suggested that those who present John Paul II as a stern moralist overlook his message that “in the end God’s mercy is stronger than our weakness.”

“Moreover, at this point, the inner unity of the message of John Paul II and the basic intentions of Pope Francis can also be found: John Paul II is not the moral rigorist as some have partially portrayed him,” he wrote.

“With the centrality of divine mercy, he gives us the opportunity to accept moral requirements for man, even if we can never fully meet them. Besides, our moral endeavors are made in the light of divine mercy, which proves to be a force that heals for our weakness.”

Benedict XVI recalled that on the day of John Paul II’s funeral, which he presided over, there were cries of “Santo subito!” Alongside these appeals for canonization, there was also a discussion “in different intellectual circles” about whether John Paul should be accorded the title “the Great.”

Benedict waived the customary five-year waiting period for saints’ causes, authorising the opening of the cause just a month after John Paul II’s death. The Pope emeritus insisted that the canonization process was “carried out strictly according to the applicable rules.”

He said that, while it was clear that John Paul II was worthy of canonization, it was difficult to define the term “great.” He noted that only two popes in the almost 2,000-year history of the papacy were known as “the Great” — Leo I, who had convinced Attila the Hun to spare Rome, and Gregory I, who had protected the city from the Lombards.

“If we compare both stories with that of John Paul II, the similarity is unmistakable,” he wrote. “John Paul II also had no military or political power. During the discussion about the future shape of Europe and Germany in February 1945, it was said that the Pope’s reaction should also be taken into account. Stalin then asked: ‘How many divisions does the Pope have?’ Well, he had no available division. However, the power of faith turned out to be a force that finally unhinged the Soviet power system in 1989 and made a new beginning possible.”

“Undisputedly, the Pope’s faith was an essential element in the collapse of the powers. And so, the greatness that appeared in Leo I and Gregory I is certainly also visible here.”

But Benedict concluded that the question of whether John Paul II should be called “the Great” should be left open.

“It is true that God’s power and goodness have become visible to all of us in John Paul II. In a time when the Church is again suffering from the oppression of evil, he is for us a sign of hope and confidence,” he said.