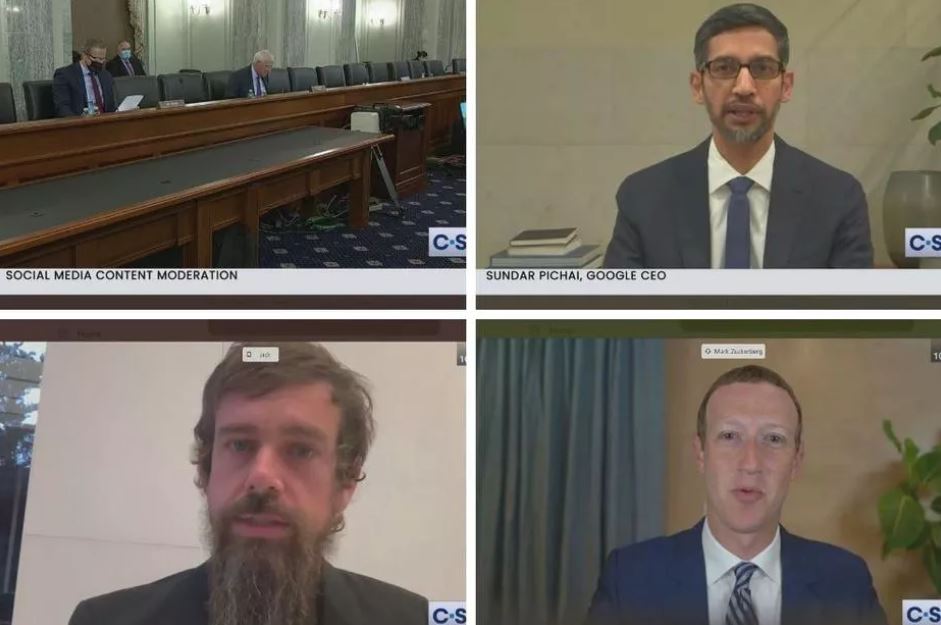 For some voters, it may have been the first time such concerns were considered. But for religious conservatives who use social media as a place to share their views and convictions, the New York Post incident was merely a high-profile reinforcement of a truth experienced on a regular basis: Big Tech companies wield unprecedented control over public discourse and have a tendency to censor viewpoints not shared by the Silicon Valley progressives who own and operate them.

In fact, the day after the New York Post incident, pro-life advocacy group Susan B. Anthony List ran afoul of moderators at Facebook. A third-party fact-checker employed by the social-media giant had concluded that ads detailing Joe Biden’s position on late-term abortions included “debunked” claims, preventing them from reaching voters in battleground states Pennsylvania and Wisconsin.

After pushback, the fact-checker eventually retracted its claim and apologized, and the ads were allowed to run. But, in a sense, the damage was already done. In the lead-up to a presidential election when every moment matters, one pro-life perspective had been muzzled from the public conversation.

According to Mallory Quigley, SBA List’s vice president for communications, the effect is that pro-life advocates need to work twice as hard as their abortion-promoting counterparts. Not only do they have to do the hard work of legislative advocacy, but Quigley says she and her colleagues “need to constantly look over our shoulder to make sure our communications are still outgoing.”

Thus, the problem facing the pro-life movement isn’t one of finding the right message to move hearts and minds. Quigley believes the cause already has done that and says that pro-lifers “have absolutely nothing to fear from increased conversation around abortion and what it is.” Instead, it’s an issue of actually being able to have those conversations in the first place, on online forums that operate effectively as the public square yet have decidedly private and even partisan biases.

The biases of Big Tech might manifest themselves in censorship of viewpoints on particular issues like abortion, but they’re grounded in something far more fundamental. Even a cursory look at the makeup of these entities reveals a monolithic culture that is uneasy, if not downright hostile, towards the worldview of religious conservatives.

A Stanford Business study found that technology executives hold overwhelmingly progressive views on contentious social issues, such as support for same-sex civil marriage (96%) and abortion rights (79%). In the 2016 presidential election, Silicon Valley employees donated 60 times more cash to Democratic contender Hillary Clinton than Republican Donald Trump, while Big Tech workers have given 90% of their political donations to Democrats in the 2020 election cycle.

In terms of prevailing views on faith, half of tech workers identify as atheist or agnostic, compared to only 7% of the general population. A 2018 exposé described Silicon Valley as a “young atheist’s world,” where prayer is mocked and religion is largely considered irrational.

Troy Miller, president of National Religious Broadcasters, says the result is a “scary pattern” of public discourse being manipulated by “ultimate gatekeepers,” who in no way, shape or form are representative of society as a whole.

NRB, an association of Christian communicators, has documented instances of social-media censorship of conservative religious views going back a decade. The list includes everything from the 2010 removal of a Christian app reaffirming “the sanctity of human life and the dignity of marriage as a union of husband and wife” from the Apple app store after it was determined to “be offensive to large groups of people” to the removal of a podcast that claimed Jesus is the only Lord and Savior.

And even if instances of social-media censorship have more to do with algorithmic errors than intentional human animus, this may only be a reflection that the programming guiding the conversation on Big Tech platforms itself displays systemic discrimination.

“There is bias baked into the system,” explains Seth Dillon, the CEO of The Babylon Bee, a satirical Christian conservative site with a long history of run-ins with social-media censorship. “The employees are biased, the coding that they’re writing reflects their bias, and a lot of the decisions that they’re making, whether conscious or not, are reflecting that bias.”

As a result, many Catholics and other Christians are concerned that the limitations progressive social-media platforms place on speech won’t stop with public-policy issues.

“Any censorship and persecution on the part of Big Tech that’s being faced by the pro-life movement will impact the Church,” said SBA List’s Quigley. “We’ve got plenty of ideas, as Catholics and as pro-life Americans, that aren’t necessarily popular in this day and age, so we have to stay vigilant and need to educate our fellow Americans about this type of censorship.

Sohrab Ahmari, op-ed editor of the New York Post and an prominent Catholic commentator, described what happened to his own newspaper as a “sinister” example of progressives’ power to suppress dissenting views, which should serve as a warning to Catholics.

“The Church is always the enemy of these forces,” Ahmari told the Registerin an exclusive interview. “So why wouldn’t they seek to silence bishops, Catholic outlets … or just your average layperson who posts on Church teaching on controversial issues?”

Given the confluence of bias and influence exercised by social media, which 79% of American adults use in some way, Miller believes issues even greater than free speech are in play, especially in a country suffering from toxic levels of divisiveness.

“If we silence one group, history shows us, that’s when bad things happen,” he said. “That’s when groups start to be persecuted. Nothing good can come from that.”

For instance, Dillon says The Babylon Bee overcame two recent instances of restrictions placed on their social-media accounts: in August, the outlet had Twitter reverse course after its account was suspended “out of nowhere,” apparently because a filter had identified it as spam. Last week, the Babylon Bee successfully appealed Facebook’s decision to demonetize their page, after the social-media company claimed that a satirical comparison between Democrats’ treatment of then-Supreme Court nominee Amy Coney Barrett to a well-known comedic movie scene about a witch trial had the potential to “incite violence.”

But Dillon says the social-media giants didn’t necessarily step back their restrictions because he provided a compelling argument for why his content shouldn’t be censored. In fact, he says Facebook maintained its decision after his initial appeal and a human review of that case. Instead, he had to resort to a different tactic.

“We go public with this stuff when it happens to make everyone aware of it, and we’ve found that is the only way we get a result,” said Dillon.

Therefore, Dillon’s concerned not only that more secular satire sites like The Onion don’t have to deal with the censorship the Bee faces, but also that conservative voices with less clout are unable to draw attention to their own experiences of censorship in order to put market pressure on Big Tech.

This dynamic highlights an important reality: Despite the fact that social-media giants like Twitter, Facebook and Google-owned YouTube play a dramatic and unprecedented role in shaping public discourse, they’re ultimately private companies. Strictly speaking, they have no legal obligation to provide “equal opportunity” to differing perspectives and can manage their content as they see fit.

As a result, there’s significant conversation on Capitol Hill about possible measures to address perceived Big Tech censorship. One area of focus is Section 230, a provision of the 1996 Communications Decency Act that shields internet entities like Twitter and Facebook from liabilities normally associated with content publishers. The law at the time understood these entities, effectively, as “bulletin boards,” forums where users shared content and the proprietor has the capacity to remove offensive content.

Critics say the law as written is unable to account for the way giant social-media platforms operate today. Sen. Josh Hawley, R-Mo., has emerged as a leading critic of the measure and has introduced legislation to limit immunities included in Section 230. Federal Communications Chairman Ajit Pai has also indicated that the FCC intends to revisit Section 230 as part of that body’s rulemaking powers “to clarify its meaning.”

Hearings revolving around Section 230 and censorship concerns were held on Capitol Hill Wednesday, with Facebook, Google and Twitter CEOs testifying before the Senate Commerce Committee, though, as CNBC reported, “All three CEOs denied that they engage in censorship.”

Another possible avenue of curbing Big Tech’s control over public discourse: anti-trust charges. Reports indicate that the Federal Trade Commission could officially make the case that Facebook exercises a de facto monopoly in its industry as soon as November.

Rick Garnett, a law professor at Notre Dame Law School, said he is concerned about the way Big Tech shapes, and possibly even distorts, “the marketplace of ideas.” But the Catholic scholar also said he worries that relying upon government intervention to remedy the situation could inadvertently lead to new forms of censorship.

“The cure could be worse than the disease,” said Garnett. “We don’t want to adopt even well-intentioned speech regulations that could have the effect of privileging the status quo or disadvantaging dissenting and minority views.”

Given the pluralistic context of the contemporary U.S., Garnett said he prefers a government that remains as neutral as possible on questions of free speech, not because neutrality is an ultimate value, but because it’s a “second-best strategy” that gives room for people to “disagree reasonably about controversial questions.” He encourages Catholics and others facing censorship to be vocal and put pressure on Big Tech platforms, suggesting that if these platforms don’t respond appropriately, market forces would give rise to new platforms “that didn’t engage in the same partisan censorship.”

Ahmari of the New York Post, however, doesn’t think that market forces alone will be effective and actually said he believes that government correction is required as a matter of justice. Citing classical theorists like Cicero, he said that Big Tech firms are acting as “private tyrannies,” with deleterious effects for free speech and, therefore, the common good.

“We need a political response, and not just a market response,” he said, arguing that social-media giants are acting politically when they censor speech. “Politics is architectonic; it shapes and determines everything else. And so we can’t leave these various realms of life to the vagaries of high-tech billionaires who happen to be woke and lefty.”

The Spiritual and Moral Effects of...