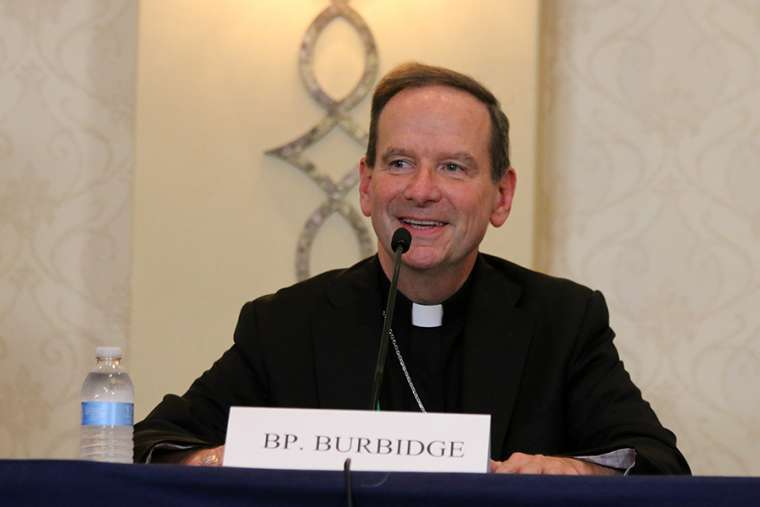 Bishop Michael Burbidge of Arlington preached on the sanctity of of life anduniversal human dignity at the annual “Red Mass” to mark the opening of the judicial year in Washington, D.C., on Sunday.

“These are the gifts we need to protect the sacredness of all human life from conception to natural death, to uphold the dignity of every human person without exception, to rid our nation of the evils of racism and discrimination and violence in our streets, to bring justice to the poor and the marginalized, the immigrant, and the most vulnerable, to protect religious freedom and liberty, and to take care of God’s creation, our common home,” he said.

The Red Mass is so-called because of the red vestments worn for the Mass of the Holy Spirit, whose gifts are sought for public servants.

The Mass is offered in particular for justices, judges, diplomats, attorneys and senior government officials, and has been observed as a tradition in Rome, London, and Paris. It is offered each year on the first Sunday of October at St. Matthew’s Cathedral in Washington, D.C., at the outset of the fall Supreme Court term.

On Sunday, a limited in-person audience attended the Mass, which was also live-streamed. Archbishop Wilton Gregory of Washington, D.C. was the celebrant, and Bishop Burbidge was the homilist.

Bishop Burbidge noted the “special occasion for the people of God to honor the character of the law, the sacred character.” He also offered prayers for deceased justices and public officials, “especially Justice Ginsburg.”

Justice Ruth Bader Ginsburg’s death on Sept. 18 created a vacancy at the Supreme Court that President Trump and Senate Republicans have pledged to fill, presumably before the election in November. Senate confirmation hearings for nominee Judge Amy Coney Barrett, a Catholic mother of seven, are slated to begin on Oct. 12.

Noting that “the truth and justice for which we long are threatened today,” Bishop Burbidge exhorted Catholics to respond “by listening to the Word of God, and allowing it to reign in our hearts.”

“Imagine the darkness, the evils that would be eradicated if we heard the Word of God and followed it?” Burbidge asked. “It is the Word that tells us that there is a natural law written on the heart of every human person, and from this, all human laws flow.”

Burbidge, who was installed as Bishop of Arlington in 2016, recounted the shooting of Republican members of Congress that occurred in his diocese just six months into his tenure. He held a Eucharistic procession in the streets of Alexandria two days afterward.

“I’ll never forget that. There was profound silence on the streets that day,” he said. “People of all faiths stopped, and even knelt. And afterwards, one person said to me, ‘Bishop, we were reminded today of what our nation needs more than ever—the presence of Christ on our streets and in our hearts.’”

“Authentic witnesses” to the faith “do not despair,” he said.

“Even in the midst of these very difficult and challenging days for all of us, they are filled with joyful hope, ever confirmed in the belief of what we celebrate at every Mass, that by His Cross and Resurrection, Jesus has transformed darkness into light, and suffering into glory, and even death into life, and all who are united to Him share in His victory, both now and forever.”