Britain’s first Syro-Malabar Catholic bishop: We are committed to the new evangelization 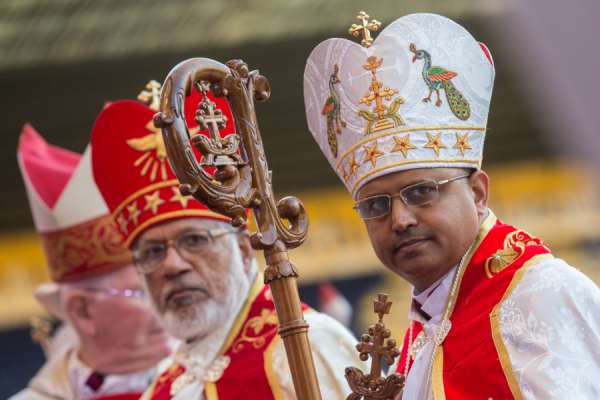 Britain’s first Syro-Malabar Catholic bishop: We are committed to the new evangelization

CNA Staff, Dec 15, 2020 / 12:00 pm (CNA).- On Oct. 9, 2016, 12,000 people filled a soccer stadium in northern England for a momentous event. The edge of the pitch was lined by women in saris carrying bright umbrellas with silver fringes jingling in the breeze. Then came a procession led by altar servers in pink robes bearing towering candlesticks.

They were followed by a stream of priests and bishops, many dressed in a striking red-and-white garment known as a paina. The procession stopped in front of a crimson-carpeted platform level with the halfway line.

The consecration of Mar Joseph Srampickal as the first bishop of the Syro-Malabar Eparchy of Great Britain was about to begin.

“It was a celebration of the unity, diversity, beauty, and the glory of the Catholic faith,” Srampickal told CNA in an interview.

Those present that day included not only a significant number of the estimated 40,000 Syro-Malabar Catholics then living in England, Scotland and Wales, but also members of the local Latin Rite Diocese of Lancaster. Representatives of the Syro-Malankara Catholic Church, another Eastern Catholic community based in India, and the Ukrainian Greek Catholic Church attended as well.

“This unity of the faithful was a witness to the diversity of the Catholic faith. So, my episcopal ordination service was a testimony to the beauty of the diverse but united Catholic faith to other Christian communities, religious traditions, and even to non-believers in Great Britain,” the 53-year-old bishop said.

The Syro-Malabar Church is one of the 23 Eastern Catholic Churches in full communion with Rome. Based in Kerala, southern India, the Church has more than four million members worldwide. It uses the ancient East Syriac Rite and the vernacular language of its liturgies is Malayalam.

Srampickal was ordained a bishop by Cardinal George Alencherry, Major Archbishop of the Syro-Malabar Catholic Church, with Bishop Michael Campbell of Lancaster and Mar Joseph Kallarangatt, the head of Srampickal’s home eparchy, serving as co-consecrators.

“I was fortunate to enjoy the presence of many brother bishops and priests from across England, Wales and Scotland as well,” he remembered.

“The presence and active participation of the laity conveys the importance of their role in the life of the Church, and in the formation and continued work of the Eparchy. Hence, looking back, I have only memories of God’s merciful love.”

The Syro-Malabar Catholic community formed in Britain as a result of migration from India, which increased in the decades following the end of British rule in 1947. There are now an estimated 1.5 million members of the British Indian population, according to the last U.K. census in 2011, 10% of whom are Christian.

When the Syro-Malabar Eparchy of Great Britain was erected in 2016, it had 23 priests. Srampickal said that today that figure had doubled to 46, with a further 10 expected to join next year.

“With the generosity, cooperation, and support of many people, including the local bishops, priests, and laity, we were able to plan and grow in many ways,” he said.

As part of a five-year pastoral plan called “Living Stones,” Srampickal oversaw the reorganization of the eparchy’s 173 Holy Qurbana (Mass) centers into 74 parishes, missions or proposed missions in eight regions.

The eparchy is based in Preston, Lancashire, a city known for its loyalty to the Catholic faith long after the English Reformation. Srampickal is based at the Syro-Malabar Cathedral of St Alphonsa, a soaring Gothic Revival building previously known as St. Ignatius Church.

The bishop said it was “providential” that the eparchy is based in Preston, a city whose name derives from the Old English meaning “priests’ settlement.” The “spacious and beautiful” building was donated by Lancaster diocese. The church was originally served by Jesuit priests. One of its curates was the poet Gerard Manley Hopkins.

“A great legacy has been handed over to us and we are immensely grateful for that,” Srampickal said. “As the Eparchy is spread across England, Wales, and Scotland, we have meetings and gatherings in different parts of Great Britain, often for practical purposes in the Midlands.”

Although the Syro-Malabar Catholic Church is not well known in wider British society, the bishop said that its members had not encountered misunderstandings among Latin Rite Catholics.

“Before the foundation of the Eparchy, the Syro-Malabar faithful were very much part of their local parishes. The priests and the people understood our traditions and appreciated our presence and contributions,” he said.

“The faith we share is the same, but the Syro-Malabar Church is a church sui iuris, with her own unique liturgy, spirituality, theology, and discipline.”

“It was to promote these unique patrimonies that the Holy See established the Eparchy of Great Britain, and I am glad that the bishops, priests and the faithful were understanding, welcoming, supportive, and encouraging the Eparchy in many ways.”

Srampickal said that some bishops in Britain had shown “extraordinary care and concern” towards Syro-Malabar Catholics.

“Certainly, the Eparchy of Great Britain will ever be grateful to them, and their generosity will be marked in our history,” he said. “I am deeply convinced that faith and gifts are not merely for ‘preserving,’ but for sharing and celebrating. Knowing ourselves and others, without fear and misunderstanding, are an integral part of Christian love and spirituality.”

Syro-Malabar Catholics appear notably successful at passing on the faith to the younger generation. While teens are sometimes scarce at Masses in Britain, it’s common to see Syro-Malabar youngsters attending church with their families.

“The most important reason is the central role of faith in our families, with a strong emphasis on catechesis,” the bishop explained. “The Syro-Malabar Church has a very systematic catechetical program, based on the Catechism of the Catholic Church and the General Directories.”

He said that the whole Eparchy is involved in guiding children and young adults to become mature Catholics.

“Whenever an event is planned, the involvement of our children and young adults is a criterion. Six commissions of the Eparchy, including the commission for catechesis, are directly involved with the faith formation of children and youth,” he said.

The Eparchy also places great value on retreats, some of which draw considerable numbers. Around 5,000 people join the annual Syro-Malabar pilgrimage in July to the Catholic National Shrine of Our Lady at Walsingham in Norfolk (canceled this year because of the pandemic).

The Eparchy has recently appointed a director of the new evangelization, Sr Ann Maria S.H, who the bishop described as “a grace-filled missionary.”

Srampickal noted that his own episcopal motto is “to do the work of an evangelist” from 2 Timothy 4:5.

“The Syro-Malabar Church is blessed with vocations and this has immensely helped the missionary work in India and other parts of the world,” he said.

“From the late 1980s, the Catholic charismatic movement has been a great force of renewal in our ecclesial life. Retreats for the whole Eparchy, parishes, couples, youth, children, religious, and training for lay leaders are all part of this movement. Grand missions with specific themes are also regularly conducted.”

The Persecution of a Finnish Parli...