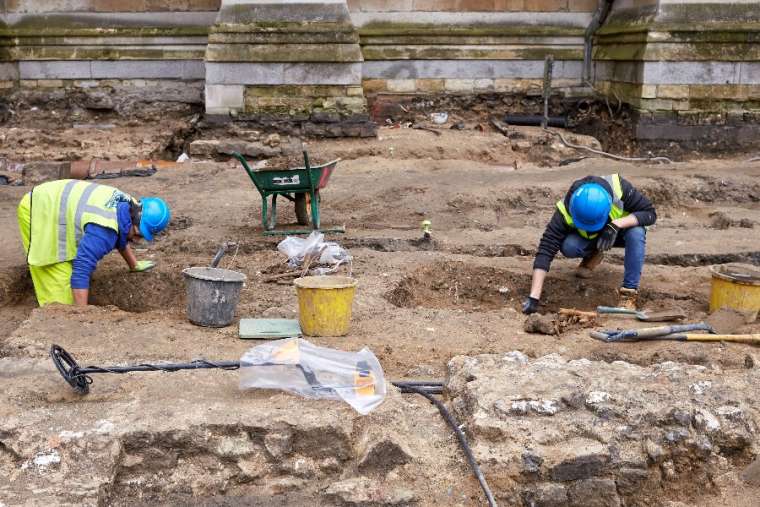 Archaeologists excavating a lost medieval sacristy at Westminster Abbey in London have uncovered what they believe are the remains of Catholic monks.

They made the discovery while working on an area of the abbey grounds used as a burial ground for monks before the 13th century.

The abbey, which is famous as the site of English royal weddings and burials, was originally established as a community of Benedictine monks in the 960s. It was known as St. Peter’s Abbey because, according to tradition, a fisherman on the nearby River Thames had a vision of St. Peter.

Researchers believe that the excavated areamay contain hundreds, or possibly even thousands, of bodies, the GuardianreportedAug. 23.

Chris Mayo, the archaeologist leading the project, told the newspaper: “You do have to be careful where you’re walking. You can see from the ground there are burials everywhere.”

A team from the company Pre-Construct Archaeology temporarily uncovered an 11th-century chalk-lined grave, which contained a well-preserved complete skeleton believed to be that of a monk.

Westminster Abbey launched a project in January to reveal the foundations of the medieval Great Sacristy on the abbey’s North Green. The excavations will be followed by the construction of a new building on the site to house welcome, ticketing and security facilities for abbey visitors.

The former sacristy can be seen in a painting (below) by Pieter Fabris, from around 1735, which shows the structure at the center of the abbey.

The Great Sacristy, an L-shaped building, was builtin 1251, when King Henry III ordered the complete reconstruction of an 11th-century church that was erected during the reign of St. Edward the Confessor.

The monks would have kept vestments, altar linen, and sacred vessels used at Mass in the sacristy. According to records, a second floor was added to the Great Sacristy in the 1380s.

The Benedictines were ejected from the abbey following the Reformation. They briefly returned during the reign of the Catholic Mary I of England, but were removed again under Elizabeth I.

The Great Sacristy was later turned into a domestic dwelling. In 1740 it was demolished after it had fallen into disrepair.

The team of 15 people has removed up to three feet of material from the site. When the project is completed by the end of August, archaeologistswill have fully exposed the superstructure of the sacristy, enabling scholars to understand how it was built and later altered. They will also have dated the remains discovered during the excavations.