MORE FROM EWTN
FAITH & RESOURCES
Welcome to EWTN GB - Global Catholic Television Network - Copyright ©
Trending News
HomeCatechism & ApologeticsHow can you support with Sacred Scripture the fact that Our Lady and the saints can intercede for us?

How can you support with Sacred Scripture the fact that Our Lady and the saints can intercede for us? 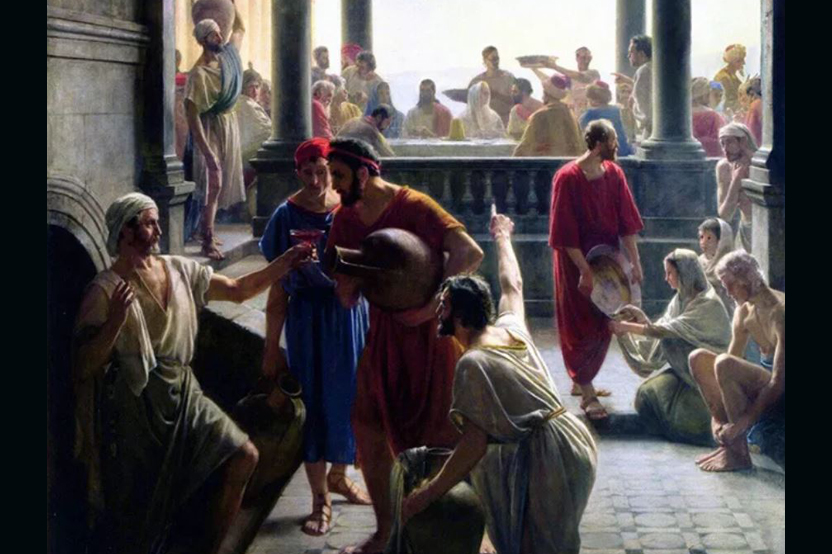 How can you support with Sacred Scripture the fact that Our Lady and the saints can intercede for us?

2 On the third day there was a wedding at Cana in Galilee, and the mother of Jesus was there. 2 Jesus also was invited to the wedding with his disciples. 3 When the wine ran out, the mother of Jesus said to him, “They have no wine.” 4 And Jesus said to her, “Woman, what does this have to do with me? My hour has not yet come.” 5 His mother said to the servants, “Do whatever he tells you.”

6 Now there were six stone water jars there for the Jewish rites of purification, each holding twenty or thirty gallons. 7 Jesus said to the servants, “Fill the jars with water.” And they filled them up to the brim. 8 And he said to them, “Now draw some out and take it to the master of the feast.” So they took it. 9 When the master of the feast tasted the water now become wine, and did not know where it came from (though the servants who had drawn the water knew), the master of the feast called the bridegroom 10 and said to him, “Everyone serves the good wine first, and when people have drunk freely, then the poor wine. But you have kept the good wine until now.” 11 This, the first of his signs, Jesus did at Cana in Galilee, and manifested his glory. And his disciples believed in him.

Step 1: God can communicate His grace to us through human instruments.

“So we are ambassadors for Christ, since God is making his appeal through us.”

“Now I rejoice in my sufferings for your sake, and in my flesh I am filling up what is lacking in Christ’s afflictions for the sake of His body, that is, the Church,”

“And when He had said this, He breathed on them and said to them, “Receive the Holy Spirit.  If you forgive the sins of any, they are forgiven them; if you withhold forgiveness from any, it is withheld.”

Step 2: Persons can pray for each other.

7 After the Lord had said these things to Job, he said to Eliphaz the Temanite, “I am angry with you and your two friends, because you have not spoken the truth about me, as my servant Job has. 8 So now take seven bulls and seven rams and go to my servant Job and sacrifice a burnt offering for yourselves. My servant Job will pray for you, and I will accept his prayer and not deal with you according to your folly.

“Finally, brothers, pray for us, that the word of the Lord may speed ahead and be honoured, as happened among you, and that we may be delivered from wicked and evil men.”

Step 3: The relationship of prayer and mutual intercession can continue after death.

“And when he had taken the scroll, the four living creatures and the twenty-four elders fell down before the Lamb, each holding a harp, and golden bowls full of incense, which are the prayers of the saints.”

“Then in the same fashion another appeared, distinguished by his gray hair and dignity, and of marvelous majesty and authority. And Onias spoke, saying, “This is a man who loves the family of Israel and prays much for the people and the holy city—Jeremiah, the prophet of God.”

How can you refute the Protestant...

What are the four last things?