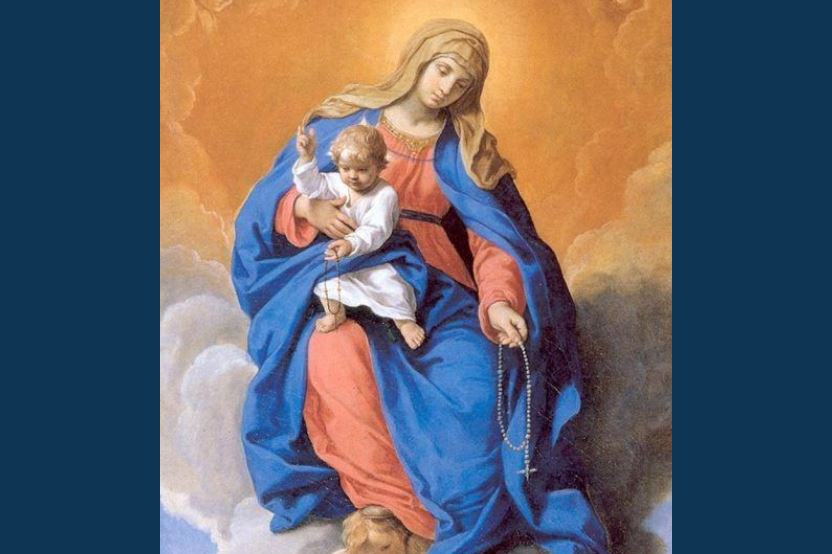 “Say the Rosary every day to obtain peace for the world.” (Our Lady of Fátima).

“My impression is that the Rosary is of the greatest value not only according to the words of Our Lady at Fátima, but according to the effects of the Rosary one sees throughout history. My impression is that Our Lady wanted to give ordinary people, who might not know how to pray, this simple method of getting closer to God.” (Sister Lucia, one of the seers of Fátima).

History of the Rosary

The rosary probably began as a practice by the laity to imitate the monastic Divine Office (Breviary or Liturgy of the Hours), during which the monks daily prayed the 150 Psalms. The laity, many of whom could not read, substituted 50, or even 150, Ave Marias (Hail Marys) for the Psalms. At least the first half of it so directly biblical, this prayer seems to date from as early as the 2nd century, as ancient graffiti at Christian sites has suggested. Sometimes a cord with knots on it was used to keep an accurate count of the Aves.

The first clear historical reference to the rosary, however, is from the life of St Dominic (died in 1221), the founder of the Order of Preachers or Dominicans. He preached a form of the rosary in France when the Albigensian heresy was devastating the Faith there. The Blessed Mother herself appeared to St Dominic, taught him how to pray the rosary, and asked for this prayer to be recited as an antidote for heresy and sin.

One of Dominic’s future disciples, Alain de Roche, began to establish Rosary Confraternities to promote the rosary. The form of the rosary we have today is believed to date from his time. Over the centuries, the saints and popes have highly recommended the rosary, the greatest prayer in the Church after the Mass and Liturgy of the Hours.

The rosary gained greater popularity in the 1500s when Moslem Turks were ravaging Eastern Europe. In 1453, Constantinople had fallen to the Moslems, leaving the Balkans and Hungary open to conquest. With Moslems raiding even the coast of Italy, the control of the Mediterranean was now at stake.

In 1571, Pope Pius V organized a fleet under the command of Don Juan of Austria, the half-brother of King Philip II of Spain. While preparations were underway, the Holy Father asked all the faithful to say the rosary and implore our Blessed Mother’s prayers, under the title Our Lady of Victory, that our Lord would grant victory to the Christians. Although the Moslem fleet outnumbered the Christian fleet in both vessels and sailors, the forces were ready to meet in battle. The Christian flagship flew a blue banner depicting Christ crucified. On October 7, 1571, the Moslems were defeated at the Battle of Lepanto. The following year, Pope St Pius V established the Feast of the Holy Rosary on October 7, where the faithful would not only remember this victory but also give thanks to the Lord for all His benefits and remember the powerful intercession of our Blessed Mother.

Rosary means a crown of roses, a spiritual bouquet given to the Blessed Mother. In a general sense, it is a form of chaplet or corona (crown), of which there are many varieties in the Church. Finally, in English, it has been called “Our Lady’s Psalter” or “the beads.” This last derives from an Old English word for prayers (bede) and to request (biddan or bid).

The rosary has been called the preparation for contemplation and the prayer of saints. While the hands and lips are occupied with the prayers (it can and should be prayed silently when necessary so as not to disturb others), the mind meditates on the mysteries of the Incarnation and Redemption represented by the decades. Meditation is the form of prayer by which the one who prays uses the mind and imagination to consider a truth and uses the will to love it and form resolutions to live it. In this way, the heart, mind, and soul of the Christian are formed according to the Gospel examples of the Savior and His First Disciple, His Mother. In God’s own time, when this purification of the heart, mind, and soul has advanced sufficiently, the Lord may give the grace of contemplative prayer, that special divine insight into the truth which human effort cannot achieve on its own.

What is the history of the Sacred...

Can our prayers help a person who...