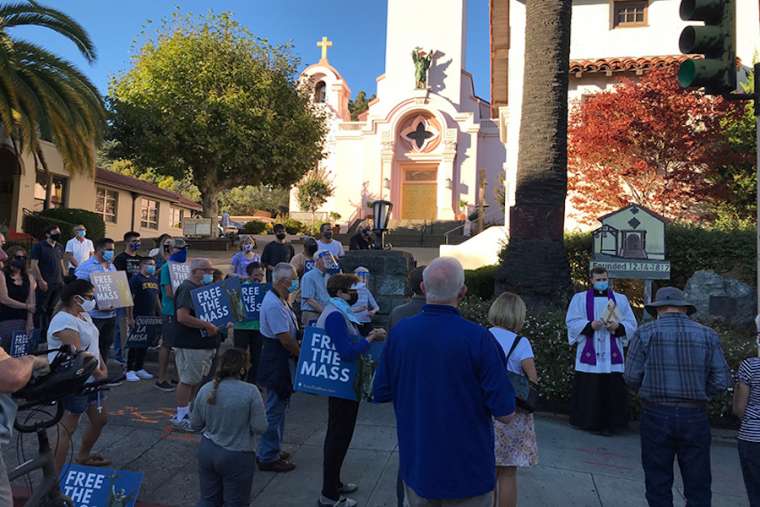 Catholics in California rallied in a peaceful demonstration Tuesday evening at the former site of a statue of St. Junipero Serra, which a group of activists defaced and pulled down earlier this week.

Father Kyle Faller, parochial vicar at the mission, led a rosary and addressed the crowd of 75-100 people Oct. 13, many of whom held signs saying “Free the Mass,”in reference to the city’s COVID-19 restrictions on public worship, which San Francisco’s archbishop has called unjust.

Faller also led a Litany of Reparation for the statue’s destruction, as well as the prayer to St. Michael the Archangel. Archbishop Salvatore Cordileone is set to offer exorcism prayers at the statue’s former site Oct. 17.

“Let this be a time for all of you to take courage and not be afraid, as our great Pope St. John Paul II said,” Faller told the crowd.

“This is what it means that our faith is not restricted to private life or in a church itself. Our faith is meant to be lived in the church but also on the streets, in our homes, in our workplaces.”

St. Serra, an 18th-century Franciscan priest and missionary, is viewed by some activists as a symbol of colonialism and of the abuses that many Native Americans suffered after contact with Europeans. However, historians say the missionary protested abuses and sought to fight colonial oppression.

While many Native peoples did suffer horrific abuse, activists tend to conflate the abuses the Natives suffered long after Serra’s death with the period when Serra was alive and building the missions. Pope Francis canonized Serra in 2015 during a visit to the United States.

Though Serra himself did not found Mission San Rafael, it owes its existence to Serra’s legacy, as he founded the first nine missions in what would become California.

The hourlong protest Oct. 12, organized by members of the Coast Miwok tribe, marked Indigenous People’s Day, the holiday that some cities and states – including California – have designated to replace Columbus Day.

A church maintenance worker had covered the statue in duct tape before the protest to protect it from graffiti, and boarded up windows at the mission. Numerous statues of the sainthave been vandalized or destroyed this year,most of them in California.

The masked rioters peeled off the duct tape and sprayed red paint in the statue’s face. Some protestors tried to prevent local news cameras from filming the toppling, but Fox2 captured the statue’s fall on video. At least five people can be seen pulling on the statue’s head with nylon cords and ropes.

Faller said when he and the parish pastor, Father Luello Palacpac, looked out at the rioters pulling down the statue, they saw “people that need to be loved.”

Father Faller encouraged those in attendance to persevere in prayer and offered a reflection on Jesus’ forgiveness in the face of persecution.

“Let your heart not be embittered or stubborn in hate or anger,” he exhorted the crowd.

“On the cross, when Christ looked at those who were persecuting them, those who called for his death, and what did he say? He did not condemn them. He did not scream at them…He said to his Father, ‘Forgive them, for they know not what they do.’ That is the beating prayer of the cross, and that should be our prayer each and every day,” Faller said.

Police have arrested five women in connection with the incident and charged them with felony vandalism, Fox2 reported.

Father Palacpac could not be reached for further comment, but an archdiocesan spokeswoman told CNA that he believes the mission will be able to restore the statue.

The San Rafael Police Department said in an Oct. 13 statement that the five women had been issued citations and released, and that the cases had been forwarded to the district attorney’s office for prosecution.

The department said they had worked with representatives from the Archdiocese of San Francisco to develop a plan in response to the Oct. 12 protest. The protest’s organizers had announced the gathering on social media before it took place.

“The archdiocese requested that we use de-escalation techniques and minimize interactions that could lead to the use of force against protestors. The Archdiocese supported a civil protest and stated that they wanted to prosecute any offenders who damaged or vandalized their property,” the police department said Oct. 13.

“During the planning process, it was recognized that the main priority would be to safeguard individuals from violence. A decision was made not to get directly involved in or interact with the demonstration as it was not our intention to inflame or escalate behaviors during the protest.”

Archbishop Cordileone on Tuesday decried the “mob rule” that led to the statue of the saint being “mindlessly defaced and toppled by a small, violent mob.”

“This kind of behavior has no place in any civilized society. While the police have thankfully arrested five of the perpetrators, what happens next is crucial, for if these are treated as small property crimes, it misses the point: the symbols of our faith are now under attack not only on public property, but now on our own property and even inside of our churches,” Cordileone said Oct. 13.

Cordileone noted that the protest against the statue began peacefully, but soon descended into violence. He encouraged people to learn more about Serra.

“There is no question that the indigenous peoples of our continent suffered under Europeans who came here and their descendants, especially after the mission era ended and California entered into the United States. But Fr. Serra is the wrong symbol of those who wish to address or redress this grievance,” Cordileone contended.

“Fr. Serra and his fellow Franciscans renounced all worldly pursuits to give their lives to serving the native peoples and so protected them from the abuses of their fellow Spaniards.”

A crowd of about 100 people tore down another St. Junípero Serra statue in San Francisco’s Golden Gate Park the evening of June 19. Cordileone offered exorcism prayers after that incident.

The exorcism prayer Cordileone offered at Golden Gate Park, the St. Michael Prayer, invokes the intercession of the Archangel Michael against the power of Satan. It is not the same as those exorcism prayers offered by the Church if a person is believed to be the subject of demonic possession.

After rioters pulled down a statue of St. Junipero Serra in Sacramento on July 4, a local Catholic set up a makeshift shrine to Serra on the statue’s empty plinth July 5, and led other Catholics in cleaning graffiti from the site.

The vandalism in San Rafael is the latest in a series of attacks on Churches and Catholic statues across the country this year. On July 11, an arson attack gutted the 249-year-old Mission San Gabriel in Los Angeles, a mission church founded by St. Serra.

Eighty-three percent of Catholic likely voters are concerned about attacks on churches in recent months, according to apoll conducted Aug. 27 – Sept. 1 by RealClear Opinion Research in partnership with EWTN News.