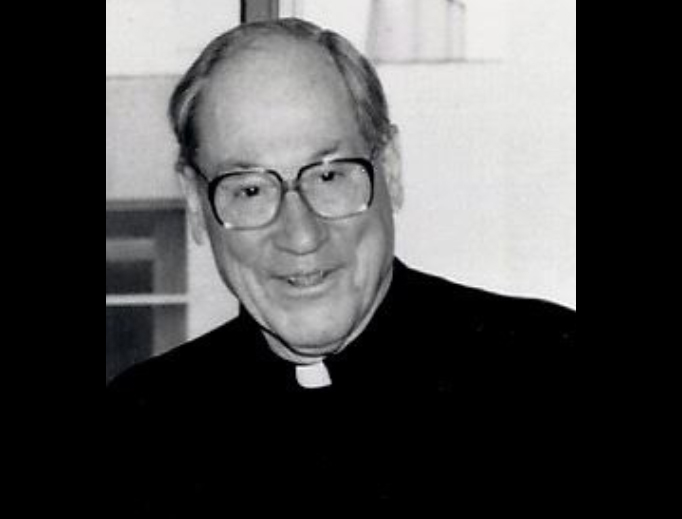 “Communism is a movement designed to attack God. Communists are driven by a deep-seated hatred of God.”

Chinese Cardinal Joseph Zen, 88, has traveled the world educating audiences on the evils of communism and its oppression of the Catholic Church in his homeland at a time when many Americans seem ready to embrace Marxist principles. A generation ago another Catholic priest, Jesuit Father John Houle (1914-97), offered a similar warning after suffering under the communist regime while serving as a missionary in China, often under the auspices of the still-active Cardinal Mindszenty Foundation.

Father Houle was born in California, joined the Jesuits in 1932 and was ordained a priest in 1946. Sent to work as a missionary in China, he was imprisoned for four years in beginning in 1953 for “imperialism,” which, in the words of Father Houle himself, “could mean anything.”

Father spent time in several jail cells, including an 8 by 10 foot cell with three other men, and another 10 by 16 feet with 15 men. At times, he was placed in solitary confinement. But whatever jail they placed him in, it was invariably dirty with a wretched odor. Sanitation was always poor. Hundreds of prisoners were often forced to bathe with the same water. In one cell, a small wooden bucket served as a toilet for six men. It continuously spilled its contents out onto the cell floor, because the men were only given the opportunity to empty it once every two days.

Meals were generally served twice a day. Father Houle recalled, “Most of the food was garbage and probably would not be fed to animals here [in the U.S.].” He remembered rotten potatoes, spoiled canned food and bone scraps as some of the few sources of sustenance. Hunger among the prisoners was a constant problem.

Father Houle and his fellow prisoners were often tortured. For example, the priest was at times forced to sit motionless on a hard floor with his back to the wall for 16 to 18 hours a day.

Because the Chinese government was reluctant to kill a foreign-born religious, the communists ordered Father to leave the country inn 1957. Saddened because he was unable to continue his missionary work, Father Houle and fellow Jesuit Father Charles McCarthy returned to the U.S.

Yet the priest still kept in touch with his Chinese friends. He knew many lay people dedicated to the Catholic faith imprisoned in labor camps. In 1994, he remarked, “The Chinese Catholics have been outstanding in their faith and their loyalty to God.”

Upon returning to the U.S., Father Houle was asked to join the advisory council of a newly-formed organization, the Cardinal Mindszenty Foundation. Founded by Eleanor, Phyllis and Fred Schlafly in 1958, the Mindszenty Foundation was created to teach Americans about the dangers of communism, and ways to oppose it. Father Stephen Dunker, also a missionary to China who was imprisoned by the communists for “imperialism,” served as its spiritual director.

Pope Pius XI’s 1937 encyclicalDivini Redemptorisdescribed the evils of communism and became the handbook and the foundation of the Mindszenty organization. An eager Father Houle agreed to help, and aided the organization throughout the remainder of his life.

The Mindszenty Foundation took its name from Cardinal Josef Mindszenty, the former primate of Hungary who was imprisoned by the Hungarian communist government after World War II. During his imprisonment, he was tortured and forced to take mind-altering drugs. The cardinal soon became the international symbol of resistance to communism.

Cardinal Mindszenty was released in 1956 during a short-lived Hungarian revolt and sought temporary asylum in the American consulate. The rebellion was quickly suppressed but the communists respected the consulate’s grant of asylum and it became the cardinal’s home for the next 15 years. In 1974, the cardinal had the opportunity to tour the free world, visiting the Mindszenty Foundation headquarters in St. Louis, and blessing the office and its work.

Caused in part by his imprisonment in China, in his later years, Father Houle suffered from serious health problems. In 1990, Father was near death in Santa Teresita Hospital in Duarte, California, diagnosed by pulmonary fibrosis, a terminal disease, and cared for by its Carmelite sisters. At one point, doctors informed family and friends that he would be dead in less than a week. Only a respirator kept him alive.

Father Houle’s superior, Father Frank Parrish, came to the hospital and blessed him with a relic of Blessed Claude de la Colombière (1641-82), a Jesuit priest who was the spiritual advisor to St. Margaret Mary, known for her role in promoting devotion to the Sacred Heart of Jesus. Father Parrish placed great faith in the intercessory power of Claude, and said, “Claude was an instrument in the hands of love.”

Soon after the blessing, Father Houle’s condition reversed. Astonished doctors could not understand how he recovered from a terminal disease. Father Houle and Father Parrish subsequently visited the Vatican with their compelling evidence of a miracle. The miracle was accepted, and in 1992, Pope St. John Paul II declared Claude a saint. Father Houle went to Rome to attend the canonization.

Father Houle devoted the seven additional years of his life that God gave him to helping audiences understand the evils of communism. He opined, “Communism is a movement designed to attack God. Communists are driven by a deep-seated hatred of God.”

He said of his time in Chinese prisons, “While I would have never chosen those experiences myself, I thank God for my memories of suffering alongside the Chinese Catholics.”