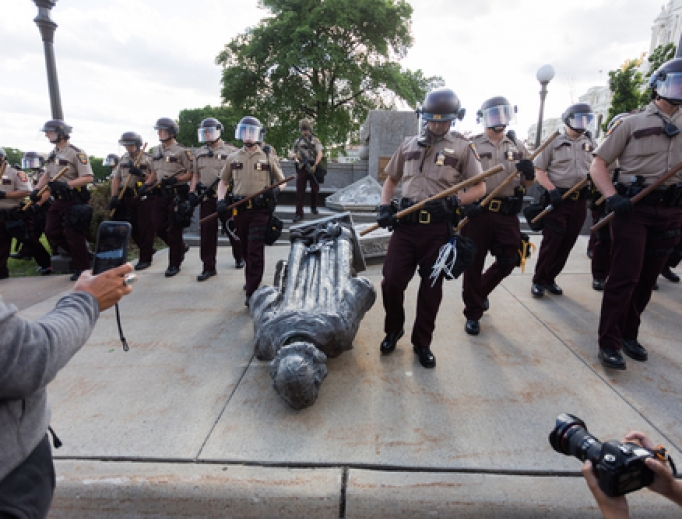 Whether or not the United States is heading in this direction, removing statues, changing the names of streets and buildings and stifling free speech are all considered tactics of regime change.

The destruction and removal of statues around the country this summer isn’t new to Carlos Eire, who as a 10-year-old, watched members of the Castro regime use sledgehammers to destroy a religious statue in Havana, Cuba, in the early 1960s aftermath of the country’s communist revolution.

“It took them a long time,” said Eire, a Yale University history and religious studies professor and iconoclasm expert living in Guilford, Conn. “It seems to me it took forever.”

Besides that statue outside an Ursuline convent, Eire, 69, watched the new government demolish or deface monuments of persons or events it wanted to remove from public memory.

“This is one of the ways in which the Castro regime has rewritten the history of Cuba,” said Eire, who in 1962 was one of 14,000 children airlifted out of Havana to the United States. “People actually are blocked from accessing the real history of Cuba.”

Eire and other Christians who’ve lived through communism are recognizing in the United States milder signs of what they experienced in their native countries — but with the characteristics of an egalitarian democracy. Along with the removal of statues related to protests over George Floyd’s death and destruction in cities, some in the public square of academia and social media are losing jobs and reputations for violating the shifting rules of political correctness.

“The free exchange of information and ideas, the lifeblood of a liberal society, is daily becoming more constricted.”

These elements of change in the U.S. do not represent a “carbon copy” of life in Soviet Bloc nations, characterized by secret police, gulags, strict censorship and material deprivation, writes Rod Dreher in his upcoming book,Live Not by Lies: A Manual for Christian Dissidents, which considers the cultural and political shift toward “soft totalitarianism” and advises how to maintain faith and resist it.

“The fact that relative to Soviet Bloc conditions, life in the West remains so free and so prosperous is what blinds Americans to the mounting threat to our liberty,” the Christian author and commentator writes. “That, and the way those who take away freedom couch it in the language of liberating victims from oppression.”

After taking power in 1945, communists in Poland also removed statues that represented the country’s independence in an attempt to erase its history, which may be what’s happening in the United States, said Ryszard Legutko, 70, a philosophy professor at the Jagiellonian University in Krakow, Poland, and a member of the European Parliament.

“It is more than erasing history: Each time, the intention was to deprive the country of its symbols, its heroes, its foundations,” said Legutko, whose book,The Cunning of Freedom, comes out this fall. “Without Washington, Jefferson, etc., there is no American identity, in fact, no U.S. as we know it. That was precisely the intention of the communists towards the Polish nation when they imposed their system on Poland and launched their attack on Poland’s history.”

U.S. history is tainted by slavery, and Floyd’s death while in police custody in Minneapolis this May has drawn attention to this past, Eire said. “The volcano came bubbling up in such a way that race has now become the issue on the top of the list here for this erasing of the past.”

Whether or not the United States is heading in this direction, removing statues, changing the names of streets and buildings and stifling free speech are considered tactics of regime change, he said.

In the case of Americanprotesters, he said, “of course, it’s difficult to see the connection between the complaint [racism] that they have and the accusation they raised against America and the Virgin Mary. But during a revolution nobody asks such questions.”

When communists took power in Romania in 1947, they also removed statues that were a reminder of that past, said Teodor Stan, 39, a real estate agent from Timisoara, Romania, who now lives in Washington, D.C. The communists did their utmost to remove and manipulate history.

When dictator Nicolae Ceausescu was deposed in 1989, monuments to the repressive communist regime also came down, he said, adding that even those statues belong to history.

“Denying that that past happened is not conducive to incorporating and dealing with that past,” he said. “Brushing it under the rock and removing it from the public space removes that conversation. I think those statues should have remained there. It is a past that needs to be understood in context.”

The statues should be removed and placed in a museum or other location to create a context to educate about the period, he added.

Along with removing statues, the cultural and political proponents of communist ideology in America have composed a lengthy list of “thoughtcrimes” (author George Orwell’s term for using politically incorrect words and ideas) which when called out in social media and other public venues have ruined careers and personal lives of those who committed such “crimes”.

In communist Poland, the penalty for similar thoughtcrimes could be severe but there were fewer prohibited words and phrases, Legutko said. Punishment is less harsh in the U.S., but each protected class — including certain races, genders and nationalities — has its own thoughtcrimes, something Legutko calls “equality going berserk.”

“In every egalitarian society such as America, every form of inequality comes to be regarded sooner or later as a form of despotism and therefore scandalous,” he said. “Hence the fury it generates; hence, the tendency to hunt down the alleged enemies of equality in the past and, as they are not among the living any more, their statues; hence, the censorship of old books and films.”

As an academic in the U.S., Eire has also felt the wrath of the politically correct mob. “Everyone has to be careful what they say because it might be construed as a sin by those who think differently,” he told the Register.

Such an environment conjures memories of communism in Hungary for Daniel Magay, 88. “If you said anything that [indicated] you didn’t like the system or you didn’t like somebody who was a communist, that was [held] against you,” said Magay, who was raised in Hungary but now lives in Cupertino, California. “They could kick you out of your job. They controlled everything.”

Magay recalled the 300-pages of “secret files” the Hungarian communist government kept on his father, consisting of denouncements by government spies, employees, friends and even a Protestant minister.

Magay defected to the United States from Hungary after winning a gold medal for fencing at the 1956 Olympic Games in Melbourne, Australia, and went on to become a chemical engineer.

“The United States has been, even before the communist takeover in Hungary, viewed as the greatest nation on earth,” he said. “To me to attack that, it’s very, very bad.”

U.S. corporations such as Google, Facebook and Amazon have taken on the role of surveilling us, said Dreher, who blogs at theAmerican Conservative. “What I think is more likely than an actual revolution is the evolution of this so-called ‘surveillance capitalism’ to merge with the state.”

Groups sowing division in the United States have created a homegrown form of Neo-Marxism, about not only the traditional Marxist class struggle but also race and gender, Legutko said. The goal is restructuring U.S. society.

But Americans think differently than those who practiced traditional communism, said Milan Cicel, a career consultant and coach in Bratislava, Slovakia. “The world is moving ahead, and we are facing different challenges today as we were facing then.”

He cited the worldwide effects of technology-related digitization and fragmentation, globalization and the collapse of political systems. Secularization, lack of belief in a transcendental reality, and a lack of hope are also factors, he said.

“In communism they believed in the future, but these people who are just looting and killing and destroying structures — they don’t believe anything,” Cicel said.

Young people’s ignorance of history makes it easier for them to erase the past, Legutko said.

As they examine what’s happening in our society, many of the sources for this story agreed that Catholics and Christians in the U.S. need to recognize the danger but also maintain hope.

The Church hasn’t been censored in the U.S. to the extent that it has in Cuba, said Eire, whose Cuban relatives’ faith has cost them jobs and social status.

Nevertheless, Christians shouldn’t assume these problems will be resolved or wait on leaders to act, Dreher said. “We need to be coming together now, in small groups, to deepen our knowledge of the faith, and commitment to it, and to talk among ourselves about how we should respond to events in the world.”

Christians can help bring healing by being hope for people, Cicel said. “Affirm and proclaim, in that order, the message of the Bible.”

Cicel strengthened faith and hope among his own countrymen by developing underground Bible studies at universities in communist Czechoslovakia, which the government labeled, “ideological subversion.”

We also need to stand firm in faith, as the Polish Church did under communism, Legutko said.

“It was a place of refuge that defended the creed, the faith, Catholics and Catholic institutions,” he said.

As a young man, Legutko said he thought communism was invincible and would continue forever.

However, he added, “history has always had a lot of surprises, but we have to help history. [Changing the present course] will not happen by itself. Be a part of history. “