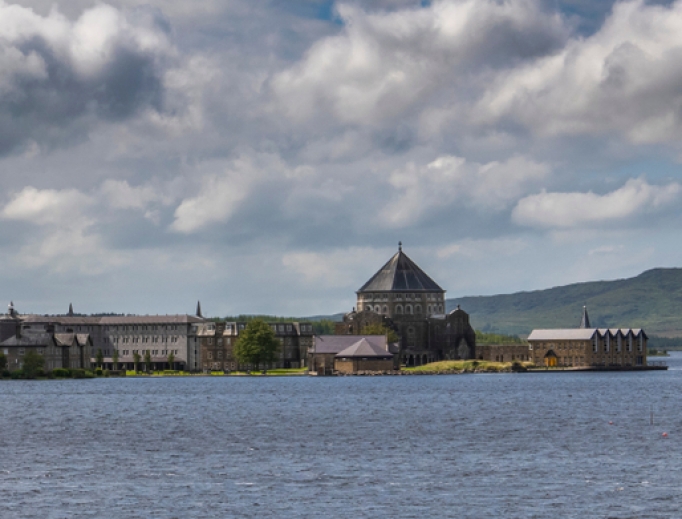 DONEGAL, Ireland — Despite the careful reopening of churches following the COVID-19 lockdown, one of Ireland’s most ancient and famous religious sites remains closed. The announcement of the suspension of the traditional summer pilgrimage to St. Patrick’s Purgatory on Lough Derg (pronounced Lock Durg) was met with great disappointment by the Irish faithful.

For the very first time since 1828, this beautiful windswept island in Donegal, usually bustling with pilgrims and constant prayer, lies silent.

Each year, 11,000 pilgrims typically visit the island, with the traditional three-day pilgrimage of prayer and physical penance taking place from June 1 to Aug. 15. Father Laurence Flynn, the prior of Lough Derg, said that “confined space on the island” was thedeciding factorbehind the decision to cancel this year.

St. Patrick’s Purgatory on Station Island, locally known as Lough Derg, the name of the surrounding lake, has been a place of Christian pilgrimage and prayer since the fifth century. The spiritual origins and rich history of the island and surrounding area are firmly rooted in the monastic tradition, with St. Patrick their official patron.

In fifth-century Ireland, monasteries were centers of education and places of trade and industry, which attracted many visitors. Monks from nearby Saints Island first came to Station Island to retreat from their busy life. They erected stone beehive huts, where they live and prayed, overlooking the lake.

The remnants of these distinctive circular structures stand today and still form an intrinsic part of the three-day pilgrimage of prayer and penance. Travelers seeking spiritual assistance began visiting the monks on Station Island, forming the tradition of pilgrimage to Lough Derg, which has continued to develop unabated throughout the centuries — until now.

The extraordinary sacredness of the area is evident in the name given to the local river, Termon, which flows through a neighboring town and comes from the IrishTearmann, meaning “sanctuary.” Although Vikings plundered and destroyed the monastery on Saints Island in the ninth century, Lough Derg continued to be an important place of pilgrimage.

In the 1100s the Augustinian canons took over the running of Station Island, and it became known as “St. Patrick’s Purgatory.” The name came about due to pilgrims in the Middle Ages, who undertook a grueling program of prayer, penance and fasting that lasted for 15 days.

By the time of the tumultuous Reformation period, the Franciscans had taken charge. Despite the priory being dissolved and Catholic clergy and pilgrimages brutally supressed, the Franciscan friars continued to minister to many thousands of pilgrims. Pilgrims still enjoy coming to the sacred site.

Today the island is part of the Diocese of Clogher, although, in keeping with the Augustinian tradition, the priest in charge continues to be known as the “prior.”

Although modern pilgrimages to Lough Derg are nowhere near as physically demanding as the 15-day marathon of previous centuries, such a prayerful effort is certainly not for the faint-hearted.

Pilgrims set out for their journey to the island while fasting. Upon arriving on the island by boat, pilgrims immediately remove their shoes and begin to pray by extending their arms three times to renounce “the world, the flesh and the devil.”

Rain or shine, pilgrims continue walking, kneeling and praying barefoot around the centuries’ old remnants of the circular beds dedicated to Irish saints. With just one “Lough Derg meal” — consisting of black tea/coffee and toast per day — to sustain them, pilgrims continue to walk, kneel and pray throughout the night inside the island’s large basilica dedicated to St. Patrick.

Following Mass on the second day, pilgrims remain awake and do not enjoy sleep until 10pm of the second night; windswept and weary, they get to wash their dirty feet and finally rest in communal dorms.

Rising at 6am on the third day, pilgrims continue with a final Mass and prayer before leaving for home, where they will continue their pilgrimage by keeping the fast until midnight.

The Irish faithful will often talk about experiencing a “call to do Lough Derg.” Generations of Irish Catholics have embarked on this challenging three-day pilgrimage for numerous reasons. Many come in thanksgiving for favors granted. Others come to pray in petition for themselves or family members. Many come in repentance for past sins.

Confession is a huge focus of the pilgrimage. The island’s priests encourage pilgrims to leave their sins and burdens here and begin anew.

Many speak of an experience of deep spiritual cleansing, miraculous answers to prayers and of possessing a profound peace and joy on completing the pilgrimage.

Pauline Kelly is an Irish grandmother who has undertaken the pilgrimage multiple times. In her view, “The Lough Derg pilgrimage is food for the soul. It totally rejuvenates the spirit and gives me a real appreciation of the simple things in life.”

A striking feature on the island is the many young people who come to tread the same stony path as their ancestors. Despite the physical hardship, for many Irish, young and old, the three-day pilgrimage is an annual undertaking.

Jolene Cousins, a young Irish mother and Catholic elementary-school teacher, recalled her first experience of the pilgrimage: “I found the experience quite strange at the beginning and the physical conditions very tough. For me, however, it was a way of thanking God for all the blessings in my life. I also used this pilgrimage to pray for my uncle, who was terminally ill, and his family. Lough Derg gave me a deeper appreciation of the comforts we take for granted: like warm socks, food and sleep! I have completed it twice now and definitely feel the need to complete it again when the time is right.”

Another visible characteristic of this unique pilgrimage is how the pilgrims help and encourage each other. Whether supporting a fellow pilgrim to walk the slippery sharp stones, offering an umbrella or sharing a joke, there is a spirit of comradery and Christian fellowship that permeates Lough Derg.

Since 1992, day retreats have been offered for school groups and for those for reasons of age or health that are unable to take part in the traditional pilgrimage. These retreats offer an important opportunity for Irish pilgrims to encounter Christ and their Christian heritage in the peace and tranquillity of the island.

Throughout the ages this rugged and sacred place, sometimes referred to as “miracle island” has inspired many Irish writers and poets, including Seamus Heaney, W.B. Yeats and Patrick Kavanagh. In 1941, following a visit to the island, Kavanagh wrote:

The twentieth century blows across it now
But deeply it has kept an ancient vow.

Sadly, for now, this pandemic has prevented the Irish faithful from continuing their unique and ancient tradition of summer pilgrimage to Lough Derg. Irish Catholics can only hope and pray that this sacred, grace-filled island in Donegal, seeped in Christian history, will soon reopen.