Cardinal Becciu says he did not commit crimes, welcomes chance to ‘explain’ 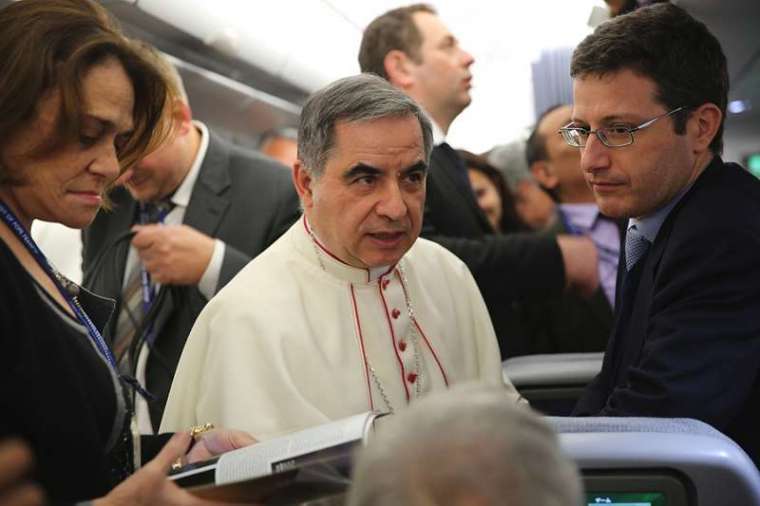 Cardinal Becciu says he did not commit crimes, welcomes chance to ‘explain’

The day after he was forced to resign from his Vatican job and to give up his rights as a cardinal, Angelo Becciu defended his actions and said he “is ready” to explain if called on by Vatican judicial authorities.

“I didn’t commit any crimes,” Becciu told journalists Sept. 25. “I received no communication on the part of the [Vatican] magistrates. I’m ready. If they want me to explain [my actions], I’ll explain.”

“I’m maintaining my serenity,” he said. “I renew my trust in the Holy Father.”

The cardinal responded to questions about actions he took while serving as “sostituto,” or the second-ranking official at the Secretariat of State, from 2011 to 2018.

New reportsrevealedthat Becciu used millions of euros of Vatican charity funds in speculative and risky investments, and that he directed Vatican and Italian bishops’ money to go toward “loans” for projects owned and operated by his brothers.

The speculative investments were made by financier Enrico Crasso, who, CNA has previously reported, was given by Becciu control over millions of euros in Vatican investment funds.

Becciu said Friday that he did not follow the actions of Crasso “step by step,” and that they met only once a year. According to Becciu, Crasso would inform him of what investments he was making, “but it’s not that he was telling me the ramifications of all these investments.”

“I don’t know” what Crasso was doing, Becciu said.

According to the cardinal, investing Vatican funds was in his job description at the Secretariat of State. “Sure, we made investments,” he said. “We made them with the desire to make them in the interests of the Holy See, not my personal interests.”

Crasso manages Centurion Global Fund, an investment fund used by the Secretariat of State, with links to two Swiss banks investigated or implicated in bribery and money laundering scandals. As CNA reported, this is the same fund in which the Vatican Secretariat of State invested millions of euros, including with money donated to Peter’s Pence, an annual collection undertaken by the Holy See.

Reports show that the fund’s investments lost money while its managers, who include Crasso, recouped millions in fees.

Vangelisti was involved in the Vatican’s purchase of the Sloane Avenue property in London, together with the director of Valeur capital, Alessando Noceti, who worked previously for Suisse Credit in London.

Becciu denied that he knew either Vangelisti or Noceti. “I don’t know who they are,” he said. “I have never met them.”

The cardinal said that he and Pope Francis did not discuss the London property during their roughly 20-minute meeting Thursday. He also denied that any money from Peter’s Pence was used to purchase the property at 60 Sloane Avenue.

The cardinal described the meeting with the pope and his subsequent resignation as “surreal,” because “yesterday, until 6:02 p.m., I felt I was a friend of the pope, a faithful agent of the pope … and then there, speaking, he tells me that he no longer trusts me.”

“That he no longer trusts me because he had seen reports from the [Vatican] magistrates that I had embezzled,” he said.

After the cardinal resigned as prefect of the Congregation for the Causes of the Saints, a position he had been in since September 2018, the pope asked him to also resign the “privileges” of cardinals, Becciu noted.

The embezzlement reports, Becciu said, claimed that when he was sostituto he had misappropriated 100,000 euros to give to a cooperative owned by his brother, and which was part of the charity of his former diocese.

Becciu said he tried to explain the action to Pope Francis, saying that it was true he had gifted 100,000 euros, but it was sent to the Ozieri diocesan Caritas from Vatican funds intended for “various” charitable works, and thus was legitimate.

He said the accusation that the money had gone instead to his brother’s cooperative connected to Caritas “seemed strange” to him, and that when he called his brother and the bishop to ask about the money, they confirmed to him that it was in the Caritas accounts, yet untouched.

A press release from the Bishop of Ozieri and president of the diocesan Caritas, Corrado Melis, Sept. 24 said the diocese “has never been the beneficiary” of undue or illegitimate favors.

Becciu is also reported to have used his connections to help two other brothers, from the time when he was apostolic nuncio in Cuba and Angola.

He quibbled with details of the L’Espresso report, which said that his brother’s carpentry company was given ecclesiastical projects in the two countries. According to Becciu, in Angola his brother only helped to repair “two doors” at the nunciature, and in Cuba, his brother did the renovations at the nunciature because “it was difficult to find” materials in Cuba, so they imported them from Italy.

To his third brother, who owns a food and beverage distributor, called Angel’s, Becciu said “he never gave money, not mine nor that of the institution” of the Church.

He also indicated proof should be given or he “will sue for defamation.”

Becciu’s family released their own statement Sept. 25, calling the reports “unfounded and maliciously false…” as well as “slanderous, offensive and disparaging.”

They said Francesco Becciu had carried out “some carpentry work on behalf of ecclesial entities” but they are “not attributable to Cardinal Becciu.”

Bishops in US emphasize importance...