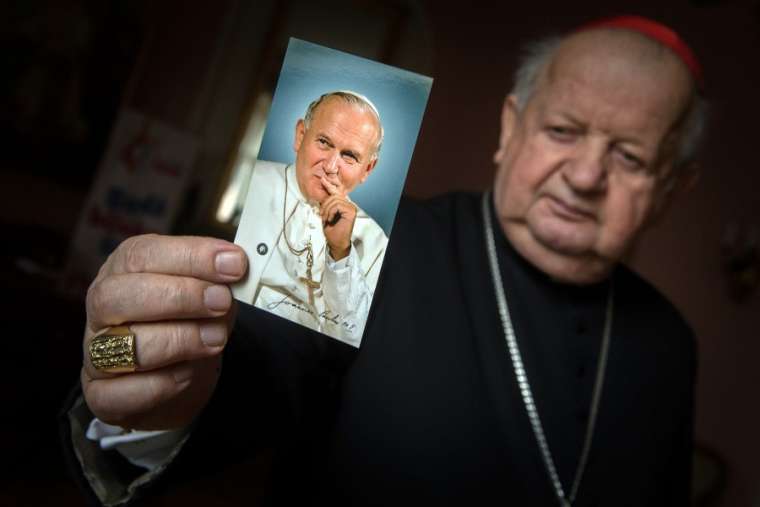 The world needs once again to hear St. John Paul II’s appeal for an end to war, Cardinal Stanis?aw Dziwisz said Tuesday as he marked the anniversary of the outbreak of World War II.

In a statement marking the Nazi invasion of Poland on Sept. 1, 1939, Dziwisz said that John Paul II’s commitment to peace was shaped by his experience of occupation.

“‘No more war! It is peace, peace must guide the fate of nations and all humanity’ — these words spoken by St. John Paul II must be repeated also today to the whole world,” said the cardinal, who served as the Polish pope’s personal secretary.

The future pope was 19 at the time of the Nazi invasion and worked as a laborer in a quarry to avoid deportation to Germany. Around six million Polish citizens died during the war — roughly a fifth of the population.

“The Holy Father mentioned that the Polish losses were enormous, proportionally greater than those of other countries. Above all, the suffering of citizens,” Dziwisz, the former Archbishop of Kraków, said.

“However, even during this time of hecatomb [great public sacrifice], Poles did not lose their national spirit and their strong faith in God, as the Lord of history and fortune.”

Dziwisz noted that the pope, who was born Karol Wojty?a and grew up in the city of Wadowice, experienced the deaths of his Jewish friends and university professors.

He said: “During the German occupation he did not remain passive. He worked as a worker in a quarry at Kraków’s Zakrzówek. Together with Mieczys?aw Kotlarczyk, a friend from Wadowice, he created an underground Rhapsody Theatre. He emphasized that it is not aggression, but words and art that are the best form of sustaining Polishness and encouragement for human hearts.”

“In 1942 he joined the underground Archbishop’s Seminary in Kraków, which was organized by Cardinal Adam Stefan Sapieha, whom the Pope remembered until the end of his life.”

Sept. 2 will markthe 75th anniversary of the official conclusion of the Second World War. Representatives of the Empire of Japan and the Allied Powers met on the USS Missouri in Tokyo Bay to sign the Japanese Instrument of Surrender on Sept. 2, 1945.

The appeal for “No more war” is associated with Pope Paul VI, who addressed the United Nations in New York on Oct. 4, 1965,saying“No more war. War never again.” When John Paul IIspoketo the UN General Assembly in New York 1979, he quoted his predecessor’s words.

Observing that 2020 marks thecentenaryof St. John Paul II’s birth, Dziwisz said: “He called on world leaders to respect the dignity and rights of every human being. He opposed any form of aggression. ‘Never one against another’ … In today’s troubled world this is a very timely message. War has never been and will never be a way to solve ethnic, economic or religious problems.”

“War will always be an evil that impacts on people and leads to destruction and extermination. That is why I repeat once again today after St. John Paul II: ‘Nevermore wars.’’”

The Church Teaches Truth, and Trut...