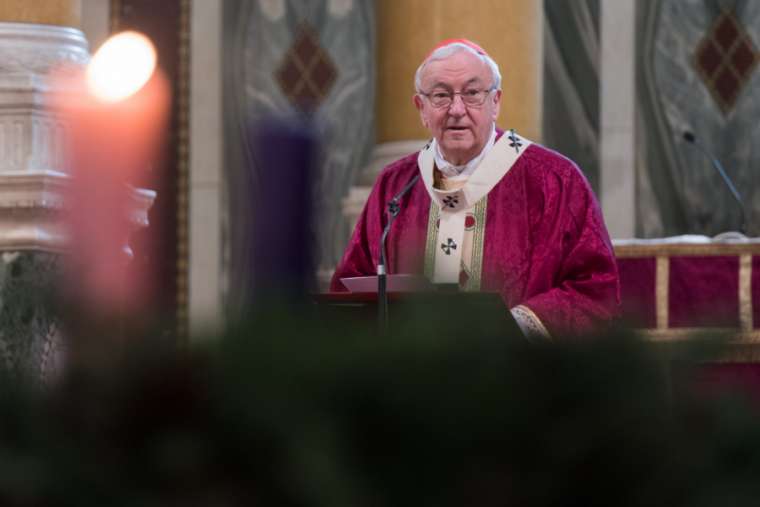 In a letter to MPs released Nov. 26, the president of the bishops’ conference of England and Wales expressed concern at the proposed cut in overseas aid from 0.7% of gross national income to 0.5%.

“In today’s figures that amounts to a cut of around £4 billion [$5.3 billion] in spending on help to the world’s poorest people,” he wrote.

Chancellor Rishi Sunak announced Nov. 25 that the government intended to abandon its commitment to the 0.7% target contained in the Conservative Party’s 2019 general election manifesto.

He insisted that cutting the overseas aid budget by a third was a temporary measure that was necessary as the country faced its worst recession in more than 300 years.

He added that the U.K. would remain the second biggest spender on overseas aid among the Group of Seven industrialized nations.

Senior Conservatives have threatened to block the cut and Liz Sugg, a junior minister at the Foreign Office, resigned in protest.

In his letter, Nichols acknowledged the pressures on government officials responding to an economic emergency caused by the coronavirus pandemic.

“A clear measure of a nation’s greatness is the manner in which it responds to the needs of its poorest. The same is true for the response to poverty between nations. If we truly wish to be a great nation, then cutting the overseas aid budget is a retrograde step,” the archbishop of Westminster said.

My letter to MPs about the reduction in overseas aid from 0.7% to 0.5% of national income. In these extraordinarily difficult times, we should not step back from our responsibilities to the world’s most vulnerable people. I hope compassionate and wise counsel will prevail. pic.twitter.com/qma6Z8vOAc

“The great tragedies of forced mass migration and human trafficking must be tackled at their source. Carefully targeted and well-managed overseas aid programs are an essential part of this effort. In the face of these catastrophes, this is no time to reduce the U.K.’s contribution or effort.”

Christine Allen, director of Cafod, the official aid agency of the Catholic Church in England and Wales, said: “At a time when international solidarity and cooperation across borders is needed more than ever, it is deeply alarming that the government has chosen to turn its back on the world.”

“Aid spending on tackling global poverty must not be treated as a charitable favor to the world, but as Britain’s moral duty.”

“Britain became one of the world’s wealthiest nations due to its long history of colonization and use of fossil-fuelled industrialization.”

She continued: “We recognize the economic challenges we face at home, but when the government has increased spending on defense, there can be no argument to reduce spending on the means to tackle conflict and its causes.”

“Yet despite our wealth, this government has decided to take money from the world’s poorest.”

In his letter, Nichols quoted Pope Francis’ new encyclical, “Fratelli tutti,” which argued that poverty in one part of the world will end up affecting the whole planet.

He added: “Promises were made by all parties on aid spending at the last election. In these extraordinarily difficult times, we should not now step back from our responsibilities to the world’s most vulnerable people, especially as combating the spread of COVID-19 will necessarily mean richer countries supporting poorer ones in purchasing vaccines for their people and helping to roll out mass vaccination programs.”

“Combating COVID-19 is an international endeavor and we cannot neglect those countries that benefit from our aid. I hope that compassionate and wise counsel will prevail.”