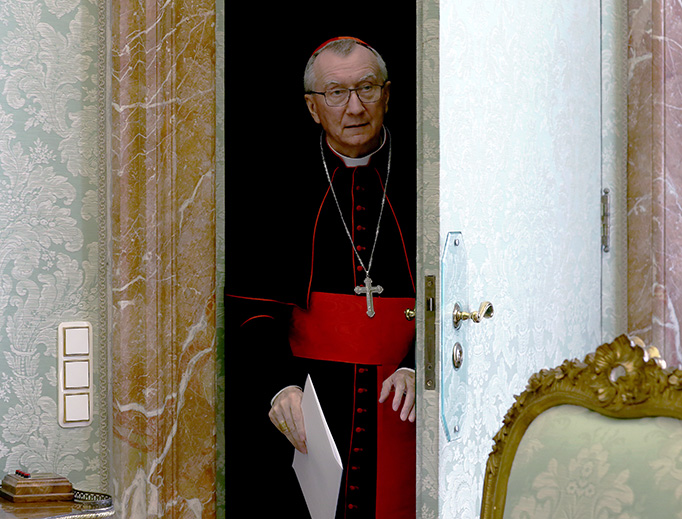 In his first-ever public comments on the issue, the Vatican Secretary of State categorically stated no money was misdirected to the Vatican from a multimillion-dollar bequest that was made to the order.

Cardinal Pietro Parolin, the Vatican Secretary of State, has firmly denied allegations that he was involved in any attempt to divert a multimillion-dollar Swiss-based bequest from the Order of Malta to the Vatican.

In his first ever public comments on the matter, Cardinal Parolin told the Register May 26 the funds were given to legitimately assigned beneficiaries and that any assertions to the contrary incur “the grave responsibility before God of spreading calumny.”

The Register reached out for comment on the matter because the issue was raised again by some members of the order, in the context of the April 29 death of Fra’ Giacomo Dalla Torre del Tempio di Sanguinetto, the Order of Malta’s grand master. Cardinal Parolin did not provide his remarks until after the Register published its report on the subject.

The order’s grand master at the time, Fra’ Matthew Festing, had been kept in the dark about the bequest, held by the Caritas pro Vitae Gradu charitable trust (CPVG). Concerned that the trust might be using the order to launder the money, Festing made it clear that he did not wish the order to accept the funds pending a thorough investigation into its origins.

But the Order of Malta’s grand chancellor, Albrecht Freiherr von Boeselager, negotiated the acceptance of the CPVG funds on behalf of the order after he became grand chancellor in 2014, even though their acceptance had initially been questioned through the courts by his predecessor, Jean-Pierre Mazery.

“I completely reject the assertion that there was any attempt on my part, either individually or with others (you mention Mr. von Boeselager), to divert the funds of the Caritas pro Vitae Gradu Charitable Trust (CPVG) to the Vatican,” Cardinal Parolin told the Register.

He added that the funds from the CPVG trust “were put under the custody” of a procurator in Geneva in 2013 and “were released after the procurator gave his approval in 2017.”

“The Vatican received nothing as it was not a beneficiary,” he added. “All the information is in the public domain.”

Questions about the trust coincided with a clash in 2016 between Festing and Boeselager over the distribution of contraceptives by the order under Boeselager’s watch. That ultimately resulted in the dismissal for insubordination of Boeselager, who then appealed to Cardinal Parolin to be reinstated.

In a move that members said breached the order’s sovereignty, Cardinal Parolin then set up in early 2017 a five-member commission of inquiry, three of whose members had close associations with the CPVG. The commission’s findings led to Boeselager’s reinstatement and Festing’s resignation.

As this dispute was underway, Cardinal Parolin appointed Georg Boeselager, Albrecht’s brother, to the board of the IOR (Vatican Bank), leading to accusations of a conflict of interest and that the Vatican had used the order to divert funds to a cash-strapped Holy See.

Cardinal Parolin was unremitting in his rejection of such allegations.

“In these circumstances,” he said, “allow me to express my profound dismay at the manipulation of information with the intention of damaging the good name of individuals and institutions or of casting continued suspicion on their behavior, with neither a care nor a love for the truth.”

A confidential due diligence report published by the Promontory Financial Group in 2017 and seen by the Register found no evidence of money-laundering associated with CPVG. It also adjudicated that the actions of Boeselager were made in the interests of the Order.

In 2018, the Order of Malta said donations from the CPVG’s trustees had resumed, and that the first donation would assist projects for young Lebanese who are mentally and physically impaired.