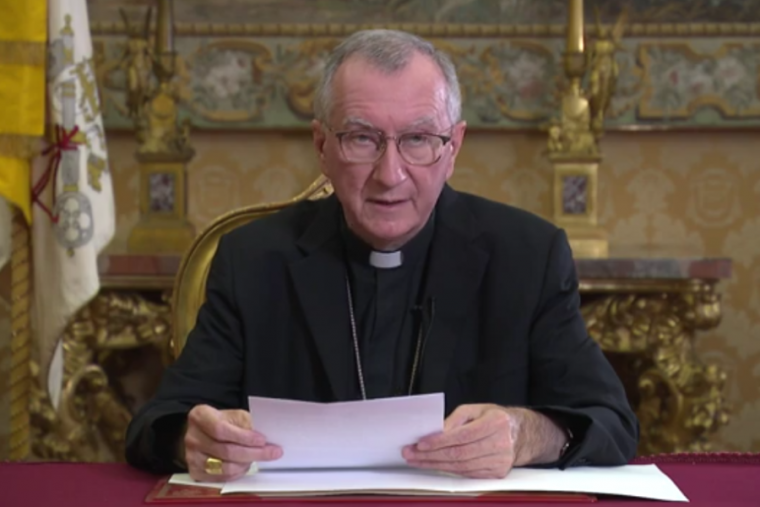 The Vatican Secretary of State asked the United Nations Monday to return to its founding ideals to protect the common good and the right to life.

“Over these 75 years, the UN has protected and served international law, promoting a world based on the rule of law and justice, rather than on weapons and might,” Cardinal Pietro Parolin said in avideo messagereleased Sept. 21.

“The United Nations is not perfect and it has not always lived up to its name and ideals, and it has harmed itself whenever particular interests have triumphed over the common good,” the Vatican official said.

Addressing the high-level meeting of the UN General Assembly to commemorate the 75th anniversary of its founding, Parolin underlined that the universal human rights that the UN has strived to champion “include the right to life and freedom of religion,” which he said “are essential for the much needed promotion of a world where the dignity of every human person is protected and advanced.”

For the first time in its history, the UN General Assembly is virtual this year, with world leaders delivering pre-taped remarks via video link due to the coronavirus restrictions on travel to New York. The first day of meetings ended Sept. 21 at 9 p.m. before the Vatican Secretary of State’s video message was played. Butit will be presented later during the meeting.

Pope Francis is also scheduled to address the UN General Assembly this week, according to the Holy See press office.

In his video message, Parolin said that countries have looked to the UN with theexpectation that the organization would “not only affirm the ideals on which it was founded, but would labor with ever-greater resolve to make these ideals a reality in the life of every woman and man.”

“Since its recognition as an Observer State in 1964, the Holy See has supported and taken an active role within the United Nations. Successive popes have come before this General Assembly urging this noble Institution to be a ‘moral center’ where every country is at home, where the family of nations convenes and where the international community –in a spirit of human fraternity and solidarity –advances together with multilateral solutions to global challenges,” Parolin said.

The Holy See’s mission at the United Nations is an important part ofthe Holy See’s diplomatic work. It aims to communicate the Catholic Church’s centuries of experience to assist the UNin realizing peace, justice, human dignity, and humanitarian cooperation and assistance.

Recently the Permanent Observer of the Holy See to the United Nations expressed his deep concern over the UN General Assembly’s inclusion of a reference to “reproductive rights” in aresolution on combating the coronavirus pandemic.

“In particular, the Holy See rejects the interpretation that considers abortion or access to abortion, sex-selective abortion, abortion of fetuses diagnosed with health challenges, maternal surrogacy, and sterilization as dimensions of ‘reproductive health,’ or as part of universal health
coverage,” Archbishop Gabriele Cacciatoldthe UN Sept. 11.

He offered several other criticisms of the resolution, including “the exclusion of faith-based organizations from the list of those who play an important role in response to the pandemic” and the lack of consensus in adopting the resolution.

Caccia took up his position as Permanent Observer of the Holy See to the United Nations in January this year. At the time of his appointment, henotedthe 75th anniversary of the UN’s founding.

“I look forward to helping the Holy See assist the United Nations in renewing its commitment to the pillars of its Charter, preventing the scourge of war, defending human dignity and rights, promoting integral development, and fostering respect and implementation of international law and treaties,” Caccia said.