Cardinal Pell Returns to Rome, as Legal Proceedings Against Cardinal Becciu Are Being Organized 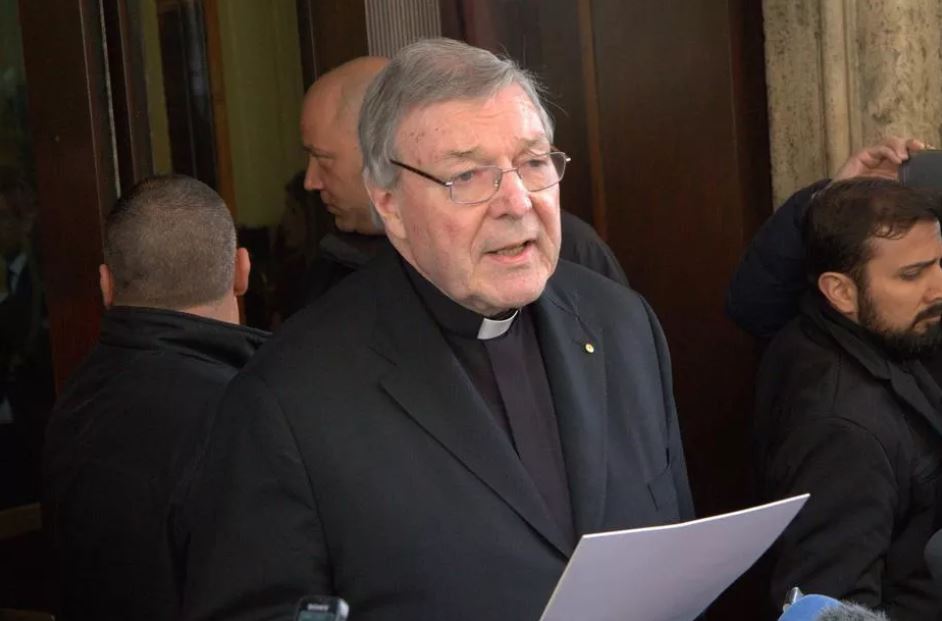 Cardinal Pell Returns to Rome, as Legal Proceedings Against Cardinal Becciu Are Being Organized

The Australian cardinal’s return is unrelated to the scandal enveloping the Italian cardinal, but previously they had opposing perspectives on how to oversee Vatican financial management.

VATICAN CITY — Just days after the resignation of Cardinal Giovanni Angelo Becciù, Cardinal George Pell returns to Rome tomorrow afternoon and is expected to take up a number of tasks assigned to him by Pope Francis, the Register has learned.

The former Vatican treasurer is expected to stay in Rome for some months and possibly resume his work as a member of various dicasteries. He may also be called upon unofficially to help with some aspects of financial reform.

Until his return to Australia to be tried for sexual abuse, for which he was fully acquitted and freed, the cardinal was a member of the Council of Cardinals advising the Pope on Church reform, as well as serving as prefect for the Secretariat for the Economy.

Pope Francis is known to respect the cardinal and values his frankness and honesty. After he was freed, the Pope made it clear that he did not want the cardinal to clear up his belongings in Rome,underscoringhis wish that the cardinal might one day return to the Vatican.

But the Register understands that the timing of Cardinal Pell’s return is unrelated to Cardinal Becciu’s dismissal as prefect of the Congregation for the Causes of Saints and the removal of his cardinalatial rights, and that the two events are purely coincidental.

Both cardinals had vastly opposing approaches, with Cardinal Pell favoring reform and a centralization of Vatican finances and Cardinal Becciù holding to greater dicasterial autonomy.

Cardinal Becciù accused Milone of espionage. He strongly protested his innocence, contending that his investigations were blocked by the “old guard” and that it was Cardinal Becciù and the former head of the Vatican police, Domenico Giani, who were spying on him.

The Vaticanwithdrewall charges against Milone a year later but he has not been given any compensation or had his job reinstated (the position of auditor general is only temporarily filled).

“It is time to do him justice,”wrotethe veteran journalist Marco Politi in the Italian newspaperIl Fatto Quotidiano.

Meanwhile, Italian media is reporting that Cardinal Becciu and six other officials involved in a now famous London property transaction that resulted in enormous losses are to be tried in a Vatican court.

La Repubblicaand other outlets arespeculatingthat the seven are to face trial following the completion of a recent Vatican investigation into the London deal that incurred “mind-blowing” losses, according to an informed source who has spent two years investigating the matter and who spoke with the Register.

The speculation has been fueled by the Vaticanannouncingon Monday that it was appointing a third prosecutor, an Italian lawyer and professor of commercial law. The Register asked the Vatican if it could confirm the reports of a trial but a representative has not yet responded.

La Repubblicaalsoreportedthat as part of the Vatican’s investigations into the London property case, it had questioned for three days Gianluigi Torzi, a broker hired to recoup the enormous losses that the deal had incurred.

The newspaper said that the investigation had turned up important information that had led to a “turning point” which “definitively convinced Pope Francis to dismiss Cardinal Becciù.”

The extent of the transaction, which Pope Francis hasadmittedto being a “scandal,” is now coming more into focus.

The details of the property investment are complex and associated with other financial contracts, but some of the key but often overlooked details of the 2014 London transaction — thoroughly investigated by theFinancial Timesand Catholic News Agency — can be summarized as follows:

· In 2011, Benedict XVI appoints then-Archbishop Becciù assostituto(deputy) of the Vatican Secretariat of State, a powerful position that includes the running of much of the Roman Curia.

· In 2012, Archbishop Becciu, who served as former apostolic nuncio to Angola (2001-2009), starts entertaining the idea of investing 250 million euros under the control of the Secretariat of State in an Angolan oil platform (the funds would come from a fund estimated to be several hundred million euro held off the Vatican’s books in Swiss bank accounts).

· In 2013, an Italian financier, Raffaele Mincione, is hired as a consultant. He presents Archbishop Becciu with an alternative investment to the risky and unprofitable Angolan deal: a 45% stake in a luxury property development in London.

· In 2014, the year Pope Francis appoints Cardinal Pell to help root out financial corruption as prefect of the newly created Secretariat for the Economy, a total of 250 million euro, which Vatican Newssayswas “tied to the activities of the Holy Father,” was wired from a pair of Swiss banks — Credit Suisse and Banca della Svizzera Italiana (BSI) — to an investment company run by Mincione in Luxembourg.

· The money is invested in 60 Sloane Avenue, which Vatican News says was carrying a very expensive mortgage of 125 million pounds ($160 million). Various reports say the stake in the property was bought for a price far higher than its true value (Vatican Newssaysthe difference was 18 million euros).

· April 2016: Cardinal Becciù orders the suspension and eventual disbandment of the first external audit of the Vatican by Price Waterhouse Coopers after it started probing the Secretariat of State’s finances.

· In the summer of 2018 Cardinal Becciù is promoted out of the Secretariat of State to become prefect of the Congregation for the Causes of Saints.

· In late 2018, Fabrizio Tirabassi, head of the administative office of the Secretariat of State, seeks an intermediary between the Vatican and Mincione and chooses Gianluigi Torzi, an Italian brokerreportedlyon the blacklist of European banks.

· In November 2018, on the recommendation of Torzi, Archbishop Peña Parra sends a request to Credit Suisse in Lugano asking the payment be made through Torzi’s Luxembourg shell company. By that time, the estimated losses on the investment are estimated to have run into hundreds of millions of euros.

· June 5, 2020: the VaticanarrestsTorzi and charges him with various counts of extortion, embezzlement, aggravated fraud and money-laundering.

An informed source who has looked closely at the 2014 transaction called the losses incurred by the Vatican “mind-blowing.” Mincione and Torzi are also alleged to have respectivelyreceivedcommissions worth 16 million and 10 million euros for their help in the transactions.

“The Vatican ended up paying 350 million [euros] for a property that was worth just 180 million, and some of that money was borrowed so the losses could be even greater,” the source said. “The whole affair consists of sleight of hand over accounting, illegal contracts, and doing things that are bad for the client but good for the consultant.”

Space Creatures and the Catholic C...